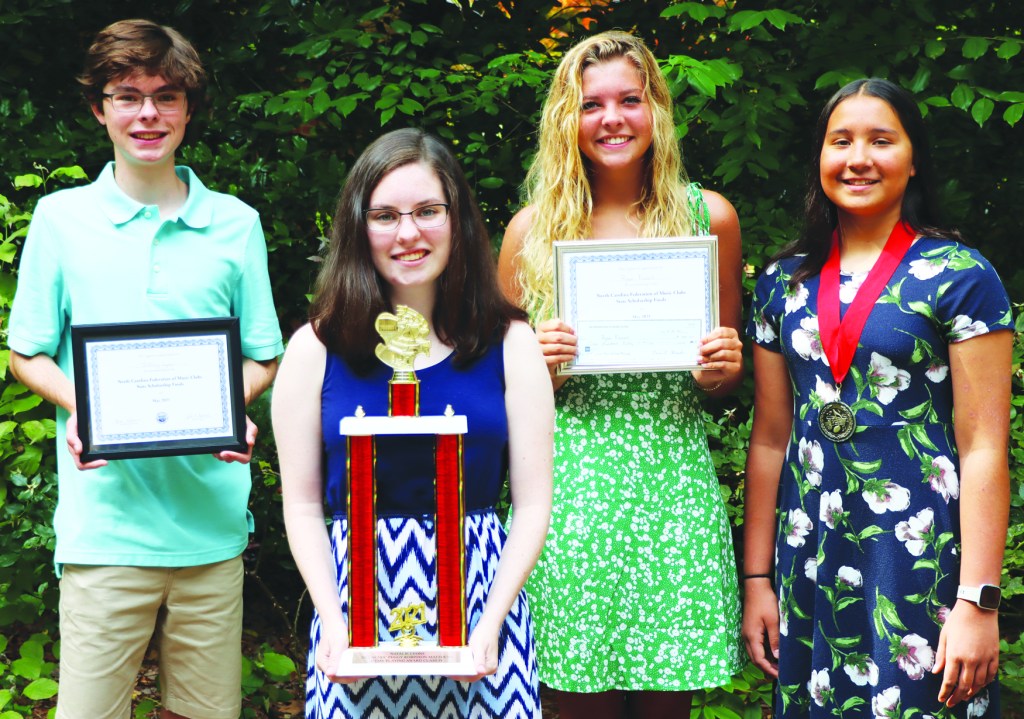 This year more than 4,000 students competed statewide in local festivals.  Winners of each local festival continued on to the state finals.

Due to COVID-19, the state finals event for 2021 was held via online video submission, in place of the normal in-person auditions held on the campus of UNCG.

Local students from the music studio of Teresia Ann Queen of Advance and the Wake Forest district, competed in the following events with the following placements:

• The Ann Graham McCurdy Vocal Art Song Scholarship first runner-up was Ryan Fussell of Advance. She is the daughter of Matt and Alison Fussell and is a recent honors graduate of Davie High School.  Ryan will be attending UNC Charlotte in the fall.

In addition to singing, Ryan enjoys performing, golfing and volleyball.  At Davie High, she played on both the school’s golf and volleyball teams.

Ryan is the former winner of the NFMC state title, the Sara Copley Moore Folk Singing award. She has been a member of NFMC for the past four years and has earned the nationally recognized festival gold cups in the areas of Musical Theater, Vocal Art Song, Vocal American Patriotic/Folk Songs, and Musicianship/Theory.

The Ann Graham McCurdy Vocal Art Song Scholarship, in which Ryan competed, is open to all 12th grade girls across the state, competing in the NFMC Junior Festivals.  The scholarship is a new offering to the slate of scholarships offered each year by NFMC and is sponsored by Allen and Teresia Queen in honor of Teresia’s mother, who supported a lifetime of music training, accomplishments and teaching.

• Another area of the NFMC state finals includes hymn playing in Classes I – V.

Three students from Queen’s studio placed in the finals event.  First year state finalist contestant, Katelynn Beadle, placed as first runner up to the Carolyn Jones Summerlin Hymn Cup Class I for 2021. Katelynn is the 13-year-old daughter of David and Jeanette Beadle of Clemmons. She has been playing the piano since age 7 and thoroughly enjoys creating music. She is often found busily playing on the piano and is teaching herself ukulele and guitar.

When not busy with music, she can be found cooking, reading, writing, climbing trees, swimming, biking, hiking or playing with her cat. She is a member of The Church of Jesus Christ of Latter Day Saints and will be entering the eighth grade this fall, continuing as a home school student.

Having won the Wake Forest Festival for Class III hymns, Jeffrey continued on to the state finals event, performing: a traditional Jewish hymn from the required performance list, Hinei Ma Tov, and added the contemporary praise and worship song, Shout to the Lord, by Darlene Zschech of Hillsongs Australia as his choice entry.

Jeffrey likes to play golf and tennis and is on the West Forsyth High School Men’s Tennis Team and is also a member of West Forsyth’s Key Club and Men’s Service Club.  He is the son of Mike and Karen Lyons of Clemmons.  Jeffrey is an active member of Clemmons Presbyterian and the CPC Youth Choir.

• The Class IV Hymn Playing event was won by Natalie Lyons, sister to Jeffrey. Her performances of Michael Smith’s How Great Is Our God and the hymn Gather Us In won her the state title of the Peggy Robinson Matthews Hymn Playing Class IV award.

Natalie, daughter of Mike and Karen Lyons, graduated this past month from Davie High School and will be attending UNC Greensboro in the fall. She is an accomplished musician in piano and percussion; having taken piano lessons for 13 years in addition to performing with the Forsyth High School Wind Ensemble for all four years of high school and playing in the school’s marching band. She also served as Percussion Captain her junior year and was named a 2021 recipient of the US Marine Corps Semper Fidelis Award for Musical Excellence. Natalie also performed in two of her high school musicals: Hairspray and Spamalot.

She is a member of Clemmons Presbyterian Church where she has shared her musical talents through the years with youth choir, handbells, serving as assistant music director for the summer VBS, handchimes, Sunday morning piano offertories and preludes as well as providing percussion accompaniment for Easter and Christmas Cantatas.

Having been a member of NFMC for eight years, in which she has competed each year, she has ended her high school music career with festival gold cups in the events Piano Solo, Hymns, Piano Duets, Piano Concerto and American Patriotic/Folk Songs with a total of nine cups.  In addition to the NFMC excellence in music festival gold cups, Natalie went on to win the NC state titles for Hymn Playing for the years of 2019, 2020 and 2021.

The NFMC has grown into one of the world’s largest music organizations since its founding in 1898. The organization provides opportunities for musical study, performance and music appreciation to more than 200,000 members nationwide in its 6,500 music-related clubs and organizations.  The organization is dedicated to finding and fostering young musical talent and sponsor nationwide Junior Festivals with more than 117,000 participants.  The mission of the NFMC is to advance and develop American music and musicians.  They are a non-profit, philanthropic and educational organization dedicated to music education and the promotion of the creative and performing arts across America.