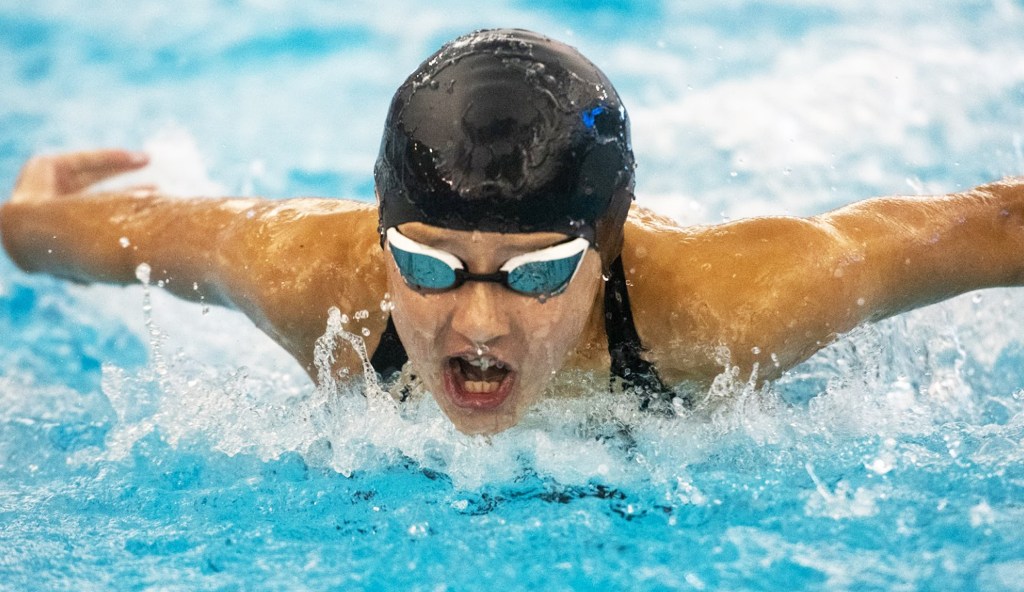 On the heels of four first place finishes at the Robin Jacobs City swim meet and reigning North Carolina State Champion (short course) in the 50-yard breaststroke, Zuleger was poised to set records in the big meet. Zuleger was entered to swim the 100 IM, 25 backstroke, and 25 breaststroke.

“For all of the current records for those races, I knew how fast she was capable of going,” said her dad and coach Chad Zuleger.

“I was really excited for the 100 IM because I had a lot of goals in it time wise,” says Skylar.

As Zuleger capped off the final individual meet record, she knew that it was a record that had been uncontested for 20 years, which, was twice the young athlete’s age. Zuleger beat the 20-year record (18.25) for the 25 breaststroke with her 16.40 time.

Bermuda Run head coach, Ryan Michel said: “Skylar’s finals meet was one of the more special days that I have seen in 25 years of summer league coaching. What she accomplished with three meet records in three individual events, including one with a former Reagan High School swimmer that has stood for 20 years is simply incredible. And in typical Skylar fashion, she didn’t expect or want any recognition. She was and has always been very grounded.”

Zuleger’s dedicated training efforts paid off in a big way at finals.

“I love how when you’re swimming it takes a lot of dedication, but your teammates are in it with you, and you form a lot of great friendships. I also like having the chance to be competitive,” says Skylar.

Chad also credits the coaches who have helped Skylar along the way.

“When Skylar swims for Tyde year-round, if I’m working and unable to help coach, then Bob Jennings is coaching her. And during the summer league, Ryan Michel does a fantastic job helping to train her. She has been very fortunate in that the few coaches she has had over the years have been great ones and have developed and encouraged her in the right way.

“However, for me wearing both the dad and coach hat, it’s nice for us to have that time together. A good portion of our drives home after a practice is her talking about what worked for her that day and also what didn’t work. She’ll mention what she plans to focus on for the next practice to better herself. Skylar loves dissecting each set down to the specifics. I rarely say much and just let her talk.”

This level of dedication is why Skylar still holds records in the Greater Winston-Salem Forsyth Swim league in other age groups to include: the 6 and under girls’ 25 freestyle, 7/8 year old girls for both the backstroke and breaststroke.

Having a supportive family has been instrumental in Skylar’s development. Skylar’s mom, Courtney helps her outside of the pool with practicing mindfulness and visualization of races with yoga, helping with her recovery, and understanding how to fuel her with nutrition.

Courtney is also in the bleachers cheering on Skylar at every race, including her encouraging older brother, Logan. Logan, also an accomplished swimmer shares a close bond with Skylar and comes to show his support by cheering her on at her races.

This past weekend the entire Zuleger family headed to Raleigh to watch Skylar compete in the N.C. State Championship (long course) in Raleigh. As of print, Skylar had placed first in the 50 and 100 meter breaststroke.

For the self-motivated swimmer, Zuleger will continue to set new goals, times, and challenges for herself.

“I have never seen her give anything but 100 percent efforts on those sets that require her to push herself. When it’s time for practice, Sky’s the one pushing me or Courtney, out the door so she’s not late and doesn’t miss anything. She believes, the earlier she shows up for practice, the better,” says Chad.

And of course, Zuleger will be glued to the upcoming Olympics in Tokyo, Japan.

“Skylar watched every day of the Olympic trials last month and is excited to watch her favorite athletes compete,” says Chad.

And many of Skylar’s teammates, coaches, supporters, and friends believe that one day we too will be watching her represent team USA.