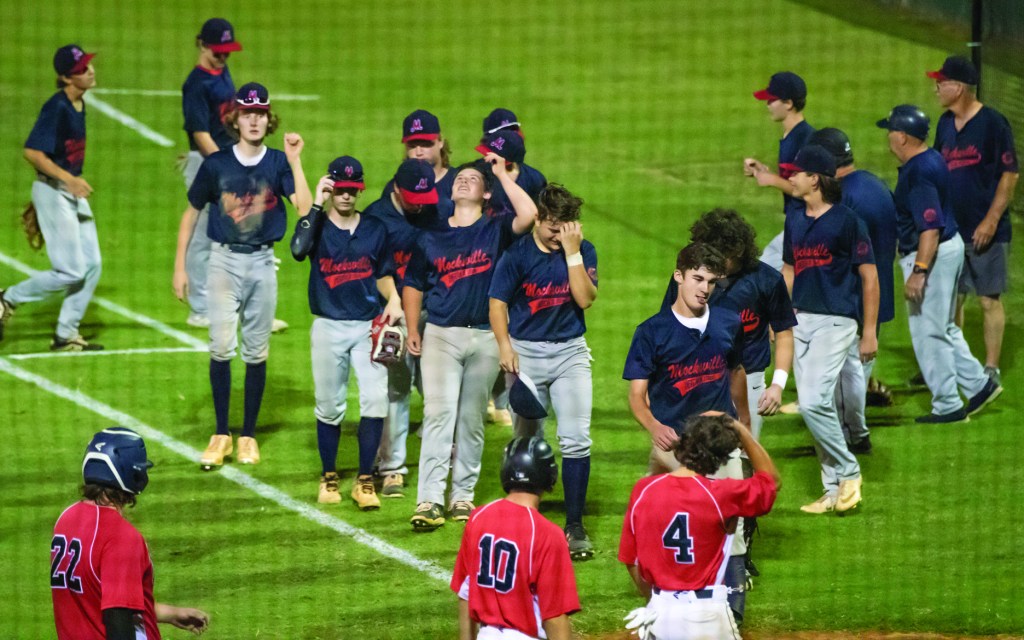 The Mocksville Junior Legion baseball team’s 4-2 win at Kannapolis on July 3 was no small thing.

The day before the game, head coach Tim McKnight feared that Mocksville might find itself outclassed because his team was going to be undermanned. On top of that, Post 174 was mired in a bad patch, losing two straight and five of six.

It was missing three starters and five players total. No matter. Mocksville pulled a MacGyver on the hosts. It made do with what it had and took a thrilling victory. Gavin Maines (5.2 innings pitched), Craig McBride (2 for 4, RBI), Brant Hager (2-4) and Kason Stewart (2-4, RBI) had big games as Mocksville improved to 5-6 overall and 4-3 in the Southern Division.

“We were down to seven players, so I got three off the White team,” said assistant coach Mike Dinkins, who called the shots with McKnight out of town. “Late Thursday night, McBride said he would be there. He was coming back a day early (from vacation). We manufactured a couple runs. It was a huge win.”

Kannapolis took advantage of two first-inning errors – Mocksville would play flawless defense the rest of the way – to take a 1-0 lead. But Mocksville took a 2-1 lead in the second, when K. Stewart, Carson Queen, Hunter Shutt and Aaron Hutchens put together consecutive singles.

Mocksville extended the lead in the fourth thanks to a McBride hit that plated Shutt. It tacked on another one in the fifth, when Jacob Leonard walked and eventually scored on K. Stewart’s single. That made it 4-1.

The win would not have been possible if Maines had not bounced back beautifully from his only previous mound appearance, a relief stint in a 9-7 loss at Davidson County in which he could not find an out. In the lefthander’s first Legion start, he held Kannapolis to six hits and offset four walks with eight strikeouts. Both runs off him were unearned.

In the second, Kannapolis had two on with one out. Maines got a strikeout before inducing a fly out to Shutt in right. In the fourth, he overcame two walks by striking out the side. In the fifth, Kannapolis failed to cut into Mocksville’s 4-1 lead despite two hits and a walk. Maines picked one guy off at first, and with two outs, he got a groundout to second baseman Queen.

“He was around the plate the whole time,” Dinkins said. “He’s got a nice little curveball. He’s got to work on his changeup, but I was very pleased with him. I wish we would have had him (earlier), but Forbush pulled him up from JV when they got on a playoff run.”

Clutch relief pitching sealed the deal. K. Stewart recorded two outs before giving way to Queen. Nobody could have seen Queen’s save coming; he had not toed the rubber all season.

The bases were loaded with one out when Dinkins turned to Queen. With the tying run at second, Queen got a popout to shortstop Hutchens and struck out the final batter on three pitches.

“Somebody said: ‘Go to Queen. He throws the ball hard,’” Dinkins said. “I said: ‘OK, we’ll do that.’ We have manufactured some pitching.”

“Hunter made a nice play at third to get a forceout at second,” he said. “He came to the hole on his glove side and was able to get a big out.

“Carson made two plays going in the hole to his right. Both of them were third outs with runners on base.

“Parker made a diving catch that saved a run. It was one of those ESPN plays. I never thought he could get to the ball. He dove at the last second and snagged it right off the ground.”