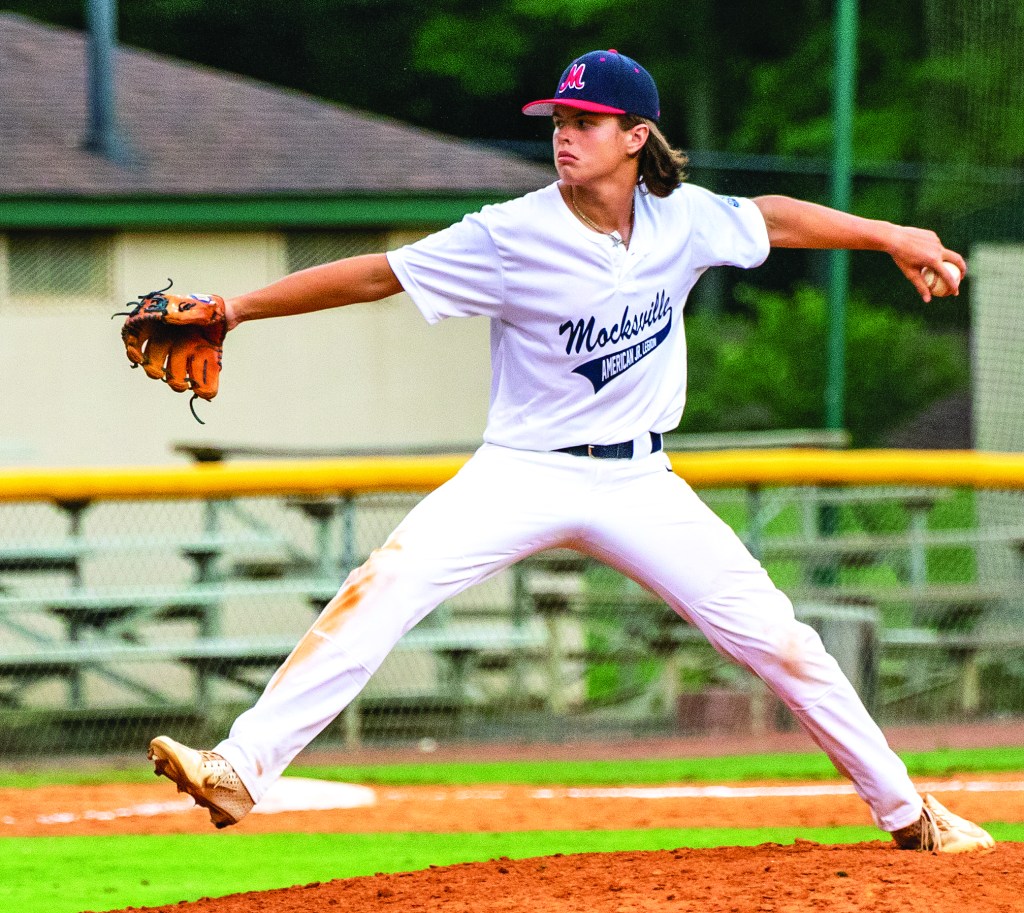 Mocksville soared to a 5-1 lead. Dane Porter was more than holding his own on the mound in his first pitching start of the season. Parker Simmons, Caleb Stewart and Jackson Sink were providing big hits.

But then it was as if Davidson County flipped a switch. The hosts scored six unanswered runs and prevailed 9-7 to remain in first. Mocksville fell to 3-2 in the division, all but ending playoff hopes. (Only one team from each division will advance to the postseason.)

Coach Tim McKnight couldn’t have asked for much more.

“It was a hard one to lose, but we played well,” he said. “We were toe to toe with them. Their team is mainly rising juniors and seniors, and we played three (rising freshmen). They’re drawing from all of Davidson County.”

McKnight was running low on pitching, so he turned to Porter, who had worked one inning all season. He responded with an inspiring start. “If you would have told me the game would have unfolded the way it did, there was no way,” McKnight said. “I mean, we went with Dane to start with. Last week when we were at Mt. Airy, we were looking for pitchers and somebody said: ‘Well, Dane has thrown a little bit.’ We had burned Jackson and Cole (Whitaker) and we didn’t have Matthew (Beshears). For three and two-third innings, he had given up one run. He was keeping them offbalance and on their front foot. In the bottom of the fourth, he ran out of gas.”

In the top of the first, Simmons led off with a double and scored on Hunter Daywalt’s ground out.

Davidson tied it in the bottom half, but Mocksville regained a 2-1 lead in the second as Stewart’s double scored Jacob Leonard.

Mocksville pushed the lead to 5-1 in the third. A Simmons walk and a Sink single triggered the rally.

Mocksville had plenty to cheer about in the first three innings, including a double play that Sink started in the bottom of the third.

When Porter retired the first two batters in the fourth, Mocksville had momentum. The next two batters walked. McKnight pulled Porter. Then came a Davidson onslaught: two-run double, walk, two-run single, two-run homer. The long ball came from Doss in his first at-bat of the game. Just like that, it was 7-5 Davidson.

“Gavin was down in the zone,” he said. “He’s got good stuff. They just caught fire.”

Daywalt, the third Mocksville pitcher, came through with a scoreless fifth to keep the deficit 7-5. Then his offense stirred excitement in the sixth.

With one out, Stewart walked, Carson Queen singled and Simmons singled to load the bases. With two outs, Daywalt got an infield hit that drew Mocksville within 7-6. The tying run scored on a throwing error.

“The ball was hit in the hole,” McKnight said. “The shortstop didn’t have a play and he airmailed it over the first baseman’s head.”

In a game of twists and turns, it was 7-7 going into the bottom of the sixth. Leonard made a huge play by throwing out Doss at third, two pitches after he stole second. Mocksville was one out from keeping the game tied, but a single, hit by pitch and walk loaded the bases. Then came an opposite-field bloop to left that plated the final two runs.

Doss took over on the mound and blew Mocksville away in the seventh.

“He didn’t try to disguise what he was doing,” McKnight said. “He said: ‘Here it is. If you can catch up to it, good for you.’ He just brought the gas. He didn’t throw one offspeed pitch. Doss is a rising senior.”

“Their an older group,” McKnight said. “Honestly, we can’t play any better than we played tonight. That’s the bottom line. We got runners on. We moved them up. We put the ball in play. We didn’t have an error. We cashed in on almost every opportunity we had.”