She started it all: Sarah Gardner Davie’s first state champ 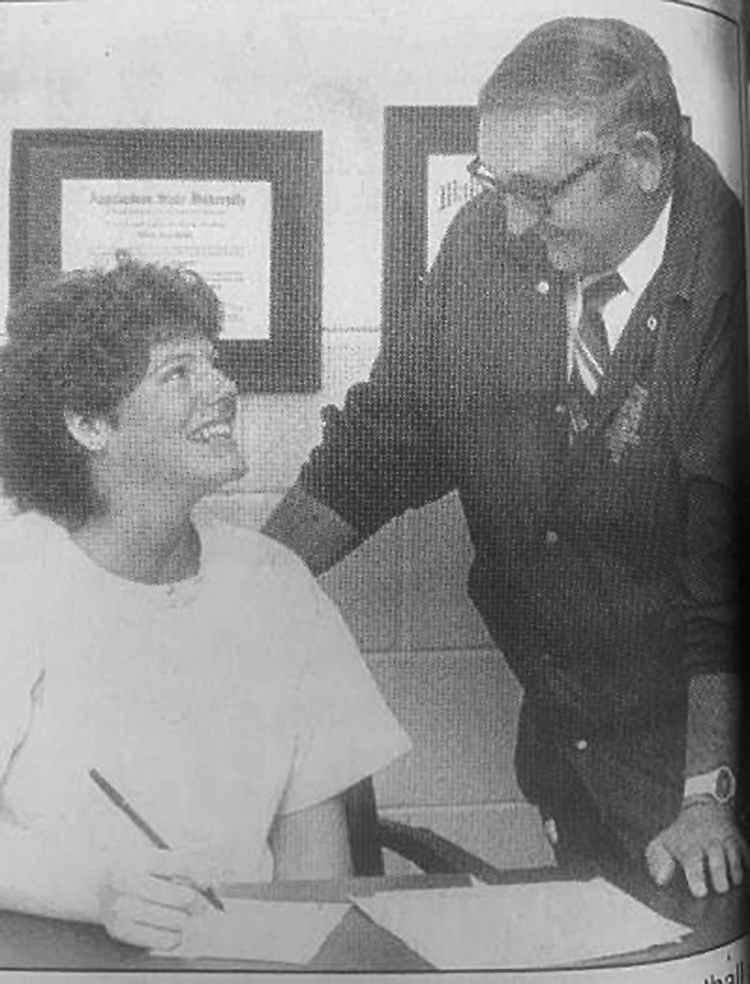 First in a series on Davie’s individual state champions.

After seeing no one reach state champion heights for seven years (2014-20), Davie saw two junior athletes capture state 4-A titles on the same day, June 26. Jack Jarvis roared through the 170 weight class to complete a 30-0 season. Spencer Williams won the shot put with plenty of room to spare.

Their distinguished work inspired memories of past state champions. There have now been 18 individual state champs since Davie joined the North Carolina High School Athletic Association in 1977.

The first was Sarah Gardner Shanks in 1982, when she won it all in the shot put. She was a star in volleyball, basketball and track. She made all-conference in all three.

Among females, she’s the absolute best field-event performer in Davie’s 44-year history in the NCHSAA. During her time at Shady Grove Elementary, she threw shot puts that coach Roverda Jarvis had never seen.

“She threw it 31 feet, four inches in the eighth grade,” Jarvis, who passed away in 2012, said in 2003. “I would say: ‘Be careful, don’t throw your shoulder out.’ She always made everyone look bad. To her it was just like picking up a basketball and throwing it. I couldn’t pick up the dumb thing, much less throw it. She just made it look so easy.”

For Davie volleyball, Gardner started as a 1978 freshman, was named to the all-North Piedmont Conference team in 1979 and 1980 and shared conference-player-of-the-year honors with teammate Lisa Eden and Thomasville’s Jackie Gandy in 1981. As a senior, she helped lead Davie to its first conference title and a 21-6 record.

For Bill Peeler’s basketball empire, Gardner was a three-year starter, a two-time all-conference selection and made all-Northwest. As a freshman in 1978-79, she was a backup on a 26-4, state runner-up team. In 1979-80, she started at forward along with sister Mary and all-time scoring leader Jill Amos (1,665 career points). The 1981-82 War Eagles had guards Angie Browder and Naomi Minwalla, forwards S. Gardner and Sharon Young, center Patty Franck and super sub Machelle Pulliam. Those War Eagles steamrolled through the NPC and finished 25-2. The 5-11 Gardner averaged 11.4 points, nine rebounds and three assists for a team that started 18-0.

Doug Fagan, who coached volleyball in 1979-80, said: “She could be a bull sometimes on the court, but she had finesse. She could post up or go to the hoop. She could shoot outside and she could drive the lane. To be a big girl, she had quickness.”

The War Eagles were 25-1 when they strutted into a playoff meeting against 17-8 Monroe. Gardner came through with 16 points and 10 rebounds, but Davie wilted in the fourth quarter as unheralded Monroe pulled the upset, 48-40.

Gardner finished with 965 career points and her teams went 87-22 with five NPC titles.

“Coach Peeler had a real knack for creating a team atmosphere,” Sarah said. “It was all about team. There were no individuals on that team. I grew up in a program and got to play with the likes of Deanna Thomas, Jill Amos, Mary (Gardner) and Gina Howell. I knew what the expectation level was, and you didn’t want it to be your class that dropped the ball, so to speak. When we walked on the court, we were Davie County.”

Gardner iced her hall-of-fame credentials with the shot put (she was inducted in the Davie Athletics HOF in 2002).

As a freshman, she took third in the NPC by heaving it 34 feet, three inches. As a sophomore, she threw it 40 feet and eased to first place in the NPC. As a junior, she broke her own NPC record at 40-2 and went on to finish third in the state.

In 1982, a seemingly invincible Gardner stumbled in the Western Regional meet, finishing third at 38-9.

“A girl from Parkland showed up with illegal equipment purposely so she would have to use somebody else’s shot put,” she said. “She used my shot put and that kind of freaked me out when she threw it out there a long ways. That was a pretty good mind game. When we went to states, I was determined she would not be using mine.”

Father Clyde Gardner, who passed away in 2018, played a big role in Sarah’s athletic success. He launched the discus 182 feet for his 1949 high school team in Iowa, a record that stood for 50-plus years. He was an all-state halfback in football. At Iowa University, he started both ways in football, won the discus gold medal three times and held the Iowa discus record for years.

“My dad was a world-class track athlete all through college,” she said. “He qualified for the Olympics but didn’t go because he had a wife and three children at the time. He showed me the way.”

The 1982 state meet was held at Raeford High. Clyde knew how to get the most out of Sarah.

“She made the finals and was complaining,” Clyde said in 2003. “I said: ‘Do you want to win this title or not?’ She said: ‘I’m hurt.’ I said: ‘You need to warm up. You need to start running and working out and get loose. Now, this girl you’re competing with (from Charlotte) has never lost. She’s won the state title the last two or three years.’ Sarah said: ‘What do I do?’ I said: ‘When you throw the first one, throw it the best you know how. If it’s beyond her best throw, she’s got a problem.’”

Sarah fulfilled her dream, throwing it 41 feet, 8.5 inches and watching her competitors crumble. Gardner’s magical throw would have won the next 19 4-A meets.

“Sarah got in there and threw it, and the girl from Charlotte scratched every throw trying to beat her,” Clyde said. “She got tied up. Sarah looked at me and said: ‘How did you learn that?’ I said: ‘Hell girl, I won a lot of medals in a lot of meets.’ When you walk in that ring after you qualify for the finals, the first one better be the best damn one you get off that day. It gets everybody else uptight. Everybody else starts scratching and stepping out of the ring and throwing it straight up in the air.’ She’d never thrown it that far.”

Angie Browder Slabach, who passed away in 2013, said in 2003: “One thing I remember about her was her letter sweater. Having a letter sweater to me was a big deal. She had bars and stars all over that sweater. Most people just had their ‘D’ and a couple bars and maybe a star. She had them all over both arms and I can remember thinking: ‘Now, that’s a letter sweater.’ She played three varsity sports for four years, so she was loaded up. And I wanted one.”

Jarvis: “I don’t know how to sing her praises enough. She was a coach’s dream. She had everything. She was an excellent student and all-around excellent human being.”