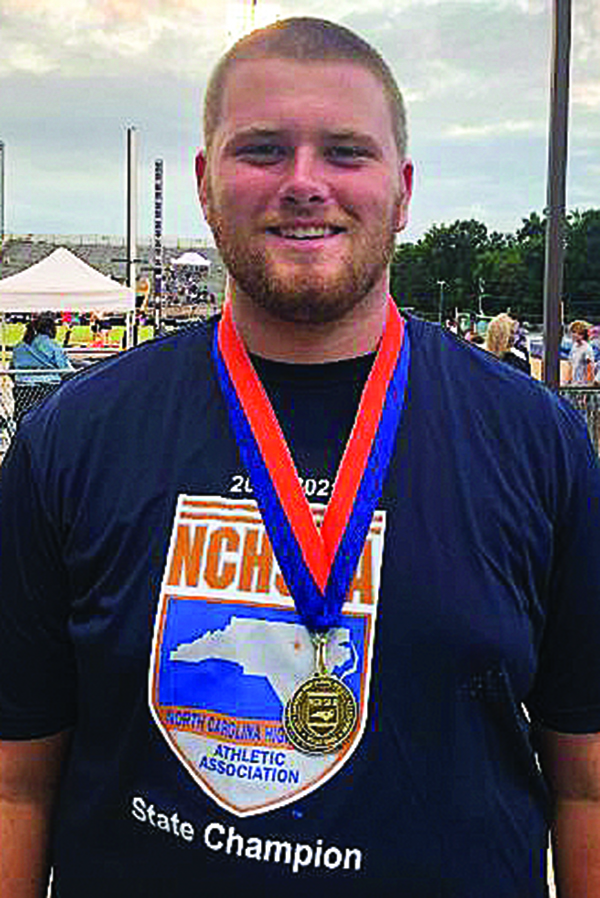 Spencer Williams’ junior track & field season has been off the charts. What an amazing run in the shot put and discus. He’s a flat-out superstar.

Three weeks later, at the Central Piedmont Conference championship meet at Davie. Williams (61-11 shot put, 162-06 discus) destroyed the competition, winning the shot by 20 feet and the discus by nearly 33 feet.

When Davie hosted the Midwest Regional on June 19, Williams picked up where he left off in the CPC, winning both events (60-10 shot put, 181-3 discus), his discus effort breaking the regional record.

Six days later, Williams competed in the state meet at N.C. A&T University. All he did was author one of the greatest individual moments Davie has ever known.

He won the state title in the shot put, his 60-2 throw easily outdistancing runner-up Desmond Coleman of Providence, who went 54-0.5. He breezed even though he was more than a foot shy of his personal best (61-11). Williams and fellow junior Jack Jarvis, who won the state wrestling title at 170, joined an illustrious group as they became the 17th and 18th state champions since Davie joined the North Carolina High School Athletic Association in 1977.

“It was pretty crazy because I remember the first day I picked up the shot put I threw 15 feet,” Williams said. “I could never imagine being there in that moment. Doing that as a junior is kind of surreal because it’s somewhere I never imagined myself being.

“I would not be able to do anything without God, my coaches, my family who take me everywhere and everybody who supports me.”

Williams had a chance for an enormous double scoop, but he settled for runner-up in the discus. North Mecklenburg senior Brayden Radhuber threw a personal-best 179-2, bettering Williams’ 169-8, which was around 17 feet below his PR.

“I had some issues with my form and I kept throwing them to the left,” he said. “My first two throws went out of bounds, so they didn’t count. You’ve got to make the top nine to go to finals, so what I did was what we call a power throw. I pretty much stood there and threw the disc just far enough to make it into finals.

“I came into finals as the eighth seed out of nine and worked my way back up to second. I was not proud of the distance, but I was happy with being able to handle the situation like that. The dude that I came in second to has committed to UNC, so I’m not embarrassed to lose to him.”

Last week Williams put his skills on the line in the Outdoor Nationals at the University of Oregon. It was a high school national championship for America’s top prep talent.

In the discus, he finished seventh out of 28. In the shot put, he finished ninth out of 24. Even though Williams was seeded between 10-15 in both events, he was unhappy with both efforts.

“I had a pretty off day in Oregon, to be honest,” he said. “I finished seventh in the discus, which is one off an All-American title. I had a terrible day in shot put. I wasn’t really happy with my performance, but it was really cool to be able to go and compete there.”

How good are you when you place seventh and ninth in the country and you feel like you didn’t have a great day? Let’s not forget Williams is a junior with a chance to add state titles and a chance to return to Eugene, Or.

“Next year is where I want to come back and compete for a national title,” he said. “I really think I can do that.”

What’s next for Williams this summer?

“Now it’s just training,” he said. “I’m going to try to get into some college meets this summer and compete against college dudes because I think that would be fun. I really like throwing the 16-pound (shot put), which is what they throw.”

Williams will land a Division-I scholarship. The only question is where?

“I’m talking to schools, but I don’t have any offers as we speak,” he said. “Pretty much what they do in track is they basically make me an offer whenever I tell them I’m ready to commit. It’s different than football. I’m still looking at a lot of places.”