Advance campers learn what it’s like to be a firefighter 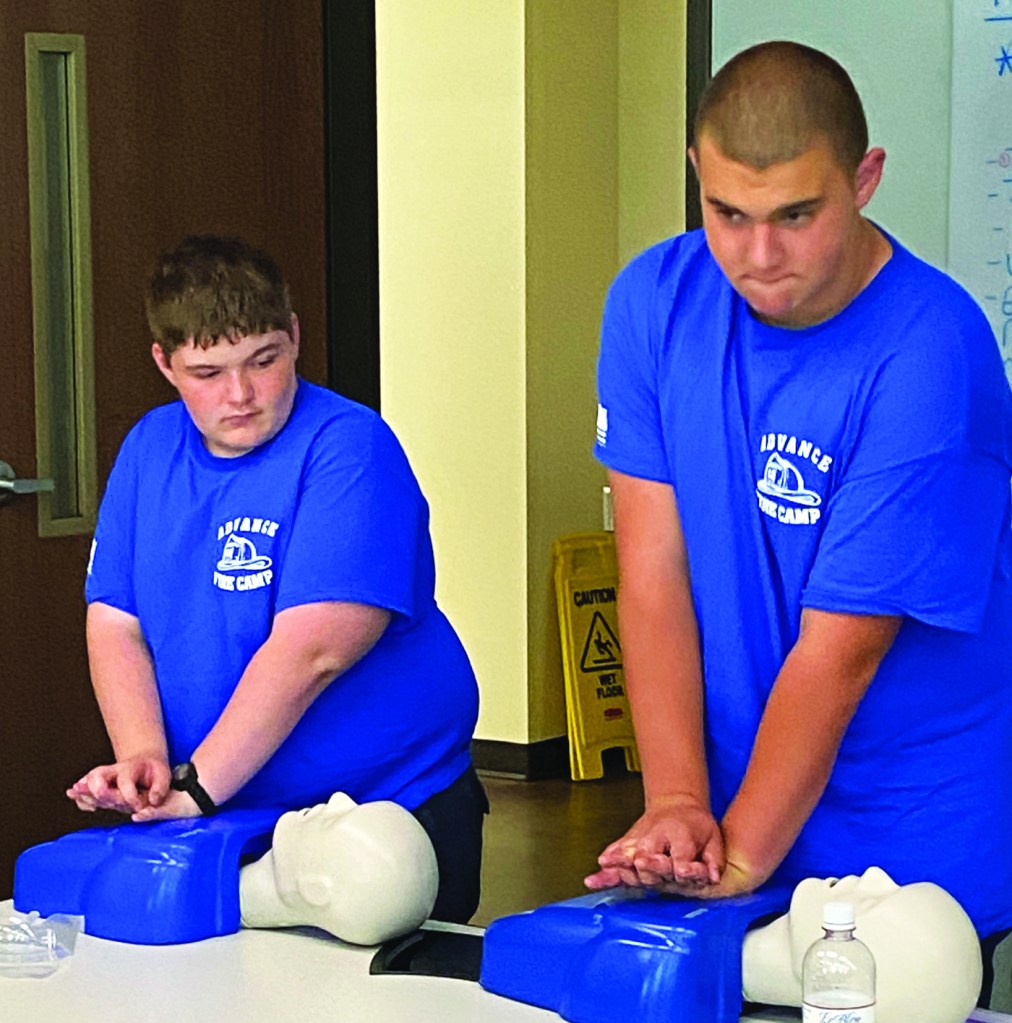 ADVANCE – Just ask anyone who had a part in the 8th annual Advance Fire Camp and they will tell you it was  a success.

The camp, open to rising sixth-ninth graders, gives campers a glimpse of  what firefighters do aevery day.

Camp began Monday, June 14 at with the Pledge, prayer, review of the rules and a quick tour of the fire station.

All campers then mounted the fire trucks for a ride to the first activity. The morning exercise involved fire hose deployment, advancement, and nozzle operation.

Everyone took a turn as nozzle person, and hose backup persons as they advanced the charged line and then hit a target. To promote a spirit of team work, campers were placed on two teams and a competitive version of the old time bucket brigade was held.

The morning ended with a lesson on sprinkler operations and each camper having to wedge off a flowing sprinkler head. Following lunch, it was back to the trucks and off to the evening session.

Campers were instructed about the protective turnout gear and breathing equipment (SCBA) firefighters wear. Everyone practiced putting all the gear and SCBA on.  Then the competition began to determine who could get their gear on the quickest.

Tuesday began much the same with Pledge, prayer, and review of the rules.  The morning activity centered around two wrecked cars and how to extricate injured people from them. All the campers were able to work with extrication tools and help remove a victim.

The next activity was DECON. Campers were contaminated with flour and learned how the decontamination wash is done. After everyone changed into dry clothes, the evening was broken into four activities.  They involved repelling, searching the safety house to save a baby, time in the driving simulator, and a ride up on the aerial ladder.

The final day began as all the others. Following Pledge and prayer, the campers began a round  robin of events that included, Drone operations, knot tying, dressing in gear and SCBA and learning about fire behavior and flashover. A flashover box was used to contain a fire and the campers were able to use a fire hose to control it.

Evening saw campers learning CPR and have a tour of a Davie EMS ambulance. The last activity was a tag team version of the  Firefighter Challenge Competition.

The camp concluded with a hotdog cookout for campers and their families.  The campers put on a demonstration of the Firefighter Challenge and were presented certificates.