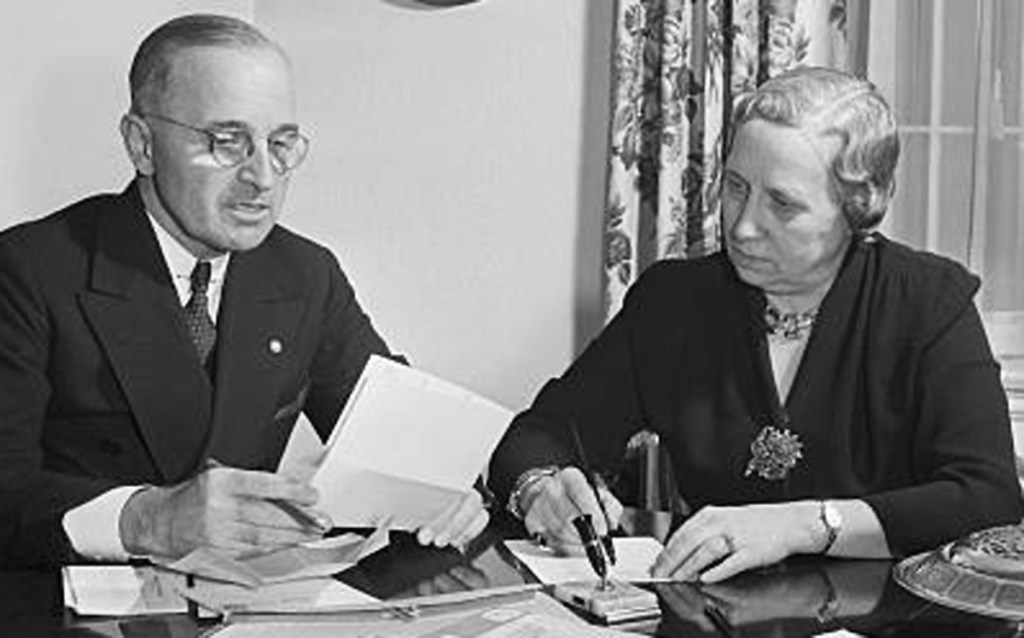 That infatuation lasted the rest of his life. There is no information in literature that indicates that Harry Truman was ever interested in another female.

Bess and Harry were in the same school for a number of years. There were also long periods when they were separated. The separation did not seem to cool the feeling that Bess and Harry felt for each other.

After Officer Truman returned from Europe where he was involved in the heavy fighting during World War I, the young couple got married on June 28, 1919 at the Trinity Episcopal Church in Independence, Mo. Bess was 34 years old, and her new husband was 35.

After Bess and Harry were married, they moved to 219 Delaware St. in Independence, Mo., which was the home of Bess’ mother.  That house was their home for the rest of their lives except for the years that they lived in Washington. Even then, they considered 219 Delaware their home and they went back there as often as they could and stayed as long as they could.

After returning from World War I, Harry opened a men’s clothing store, which failed to prosper.

He sought and got the job of judge of Missouri’s Jackson County. The title of judge is misleading because that was not a judge who presided over court, but was rather an overseer of roads and other public works.

In 1934, Mr. Truman decided to run for one of Missouri’s seats in the U.S. Senate.  Harry’s wife, Bess, helped him by appearing with him as he made speeches, etc. but she never made a speech during that campaign or any other. She is quoted in Fandex’ “First Ladies” as saying, “A woman’s place in public is to sit beside her husband, be silent, and be sure her hat is on straight.” That quotation describes Mrs. Truman well.  She always supported her husband, but she did it behind-the-scenes.

In 1944, Harry Truman was chosen to run as vice president with President Franklin D. Roosevelt.  The Roosevelt/Truman ticket easily won that election.  Just a few months after the election, the unthinkable happened. Mrs. Roosevelt called Harry Truman  to the White House. Upon his arrival there, she said, “The President is dead.” Mr. Truman asked Mrs. Roosevelt if there was anything that he could do for her. She said, “Is there anything we can do for you?  For you are the one in trouble now.”

Thus, Harry S. Truman became President of the United States and his wife, Bess Wallace Truman, became the First Lady of the land. The family, which included Mr. and Mrs. Truman; their only child, Margaret; and Mrs. Truman’s mother, Margaret Gates Wallace, moved into the White House. Mrs. Truman carried out the social obligations that were expected of a First Lady, but she didn’t savor the position.

She was as different from the former First Lady, Eleanor Roosevelt, as she could be. She never held a press conference. In fact, when reporters asked her questions, her usual answer was, “No comment.” She did not write a daily column for a newspaper or make a speech on the radio, but she did give her husband the support that he needed. In fact, Mr. Truman often confided rather secret information with his wife and sought her opinion. He said he did that because his wife’s advice was always good.

In spite of the fact that the President needed his wife’s support, she went back to Independence for rather long periods of time.  She needed time there to be with her friends, to play bridge on the screened-in back porch, etc. When she was away, Harry Truman wrote a letter to Bess each night.

At the end of the term that he completed after President Roosevelt’s death, Mr. Truman decided to seek the office for another term. His wife did not want him to run, but he was determined. One reason Mrs. Truman did not want to go through a long campaign was that she was afraid that the fact that her father, David W. Wallace, committed suicide would be brought up. Mr. Wallace’s death occurred when Bess was only 18, but it was still painful. She was always afraid that some reporter would discover that fact and bring it to the public’s attention—Bess could not stand the thought of that happening.

Bess supported Harry in every way she could, but she did not break her promise to never make a speech.Mr. Harry, always a man of the people, took a train trip across the country. Every time that the train stopped, Mr. Truman would appear on the platform at the rear of the train and speak to the people who surrounded the train. After he had completed his speech, the President would say, “Now I want you to meet the boss.”  Bess would appear to great applause. She would wave to the crowd, but she said not a word.

All the pundits were sure that Mr. Truman’s opponent, Thomas Dewey would win the election. In fact, one newspaper printed its headline early which said, “Dewey Defeats Truman.”  Mr. Truman always enjoyed showing people that paper. Mrs. Truman stayed up-to-date on all issues so she could discuss them with her husband.

Even though the public viewed Bess as a distant and unknown entity at first, they learned to love and enjoy her independent traits.   After a successful term, Mr. Truman decided not to run again—no doubt Bess influenced him to make that decision because she was anxious to go back home.

After the next President, Dwight D. Eisenhower, was inaugurated, the Trumans headed home to Independence. Bess Wallace Truman was one happy woman. When they arrived at their hometown, a huge crowd of people was at the station to meet them.

The house at 219 Delaware St. was once again their full time home, and they spent many more happy and contented years there.  Mr. Truman attended to every detail of the Harry S. Truman Library which was built within walking distance of his home. Bess Truman was once again able to do the things she enjoyed like reading and entertaining her family and friends.

Harry S. Truman died in 1972 and was buried in the garden of the Harry S. Truman Library. Bess lived 10 more years. During those years, she particularly enjoyed spending time with her daughter, her son-in-law, her four grandsons, and her friends. Bess Wallace Truman died at the age of 97. She was buried beside her husband at the Truman Library in her beloved, Independence, Mo.

The Wallace/Truman house is a nice, two-story house, but it is certainly not a mansion. It is on a tree-lined street with other nice homes.A fence was erected and some shrubbery was planted to give the family a bit of privacy, but neighbors were always welcome. That house is most interesting to visit because it looks like the Trumans just left to go on an errand. Everything in the house belonged to the Truman family.  Mr. Truman’s hat still hangs on a peg near the front door, and his books are still beside his favorite chair. The United States Park Service oversees the property.

Aktion Club opening for residents of all abilities