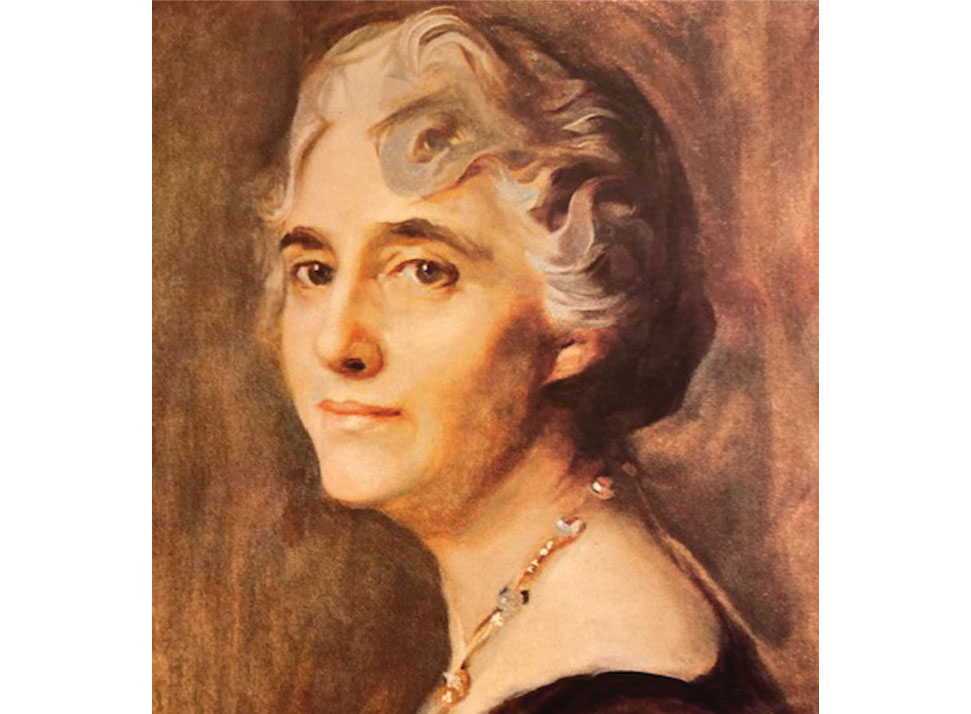 Herbert Hoover, a senior at Stanford University in California majoring in geology, was surprised one day to see a girl in a geology lab. That pretty, blue-eyed girl was Lou Henry, a freshman majoring in geology. That was a rare sight indeed, and Hoover was quite smitten by that young lady. Herbert and Lou became friends, good friends, but, at that point, Lou had one goal in mind. That goal was to graduate from Stanford with a degree in geology. Herbert graduated and gained immediate success as a mining engineer. Lou continued working for three more years to reach her goal. She did just that. She was graduated in 1898, the first women to receive an AB degree in geology from Stanford University.

Lou Henry was born in 1874 in Waterloo, Iowa. Her parents were Charles D. and Florence Weed Henry. When she was ten years old her family moved to California. She attended school there and then attended San Jose Normal School before enrolling in Stanford in 1894. From the time that they first met, Herbert Hoover was quite smitten with Lou Henry. Herbert accepted a job in Australia as a mining engineer while Lou completed her requirements for a degree. Sometime after she graduated, Hoover sent Lou a telegram which said, “Will you marry me?” She sent a one word answer, “Yes.”

Lou Henry and Herbert Hoover were married on February 10, 1899. They honeymooned on a boat to China where Herbert had accepted a job. The following is a description of Lou’s life in China from the book, First Ladies Women Who Called the White House Home, by Beatrice Gormley, “Mrs. Hoover had the training in geology to understand the mining business, and she quickly learned Chinese. She worked with her husband, trekking to remote mining sites. In June 1900, the Boxer Rebellion broke out against foreigners in China, but Lou Hover calmly bicycled through the snipers’ bullets and served tea as the Hoovers’ house was shelled.”

That was just the beginning of many foreign assignments for the Hoovers. They lived and worked in Ceylon, Burma, Siberia, Australia, Egypt, Japan, France, Italy, England and Belgium. Mr. Hoover was very successful, and, by the age of forty, he was a millionaire. During those years the Hoovers’ had two sons, Herbert and Alan.

During World War I, the Hoovers worked to provide food, clothing and medical care for the people in Belgium. After they came back to the United States, Mr. Hoover became President Wilson’s food administrator. Mrs. Hoover helped her husband in all of his endeavors. When Warren G. Harding became President, he named Hoover his Secretary of Commerce. As the wife of a cabinet member, Lou entertained in a manner appropriate for her husband’s position.

In addition to helping her husband, Mrs. Hoover was very active in Girl Scouts. Lou was actually sworn in as a troop leader by Juliette Low, the founder of the organization. She served as National President of the Girl Scouts for three years, and her interest in that organization continued for the rest of her life. Lou was particularly interested in that group because it stressed physical activity. She believed in women’s physical power and helped organize the National Women’s Athletic Association. She even served as vice-president of the National Amateur Athletic Federation, the only female officer of that organization. She also believed that women should be active politically. She founded the National Women’s Conference on Law Enforcement and was involved in the League of Women Voters. Lou Hoover was always a busy woman, but being a good mother was her first priority. She was strong intellectually. One of her greatest intellectual achievements was translating from Latin into English the sixteenth century text on metals, Agricola’s De Re Metallica. That was/is considered a great achievement.

During Mr. Hoover’s campaign for President of the United States, his wife was right by his side. In fact she said, “I enjoy campaigning because my husband makes the speeches and I receive the roses.” When Herbert Hoover was elected President in 1928, his wife was well-prepared to take on the duties of First Lady. She had entertained and in all kinds of situations all over the world as the wife of a mining engineer and then as the wife of the Secretary of Commerce.

When the Hoovers moved into the White House, they abolished some of the old customs such as the New Year reception, but they continued to have a full social calendar. They had 40 or 50 teas and receptions per year. Mrs. Hoover was considered an outstanding First Lady—much liked and admired. Mrs. Hoover took part in all kinds of ceremonies such as christening of ships and she filled in for her husband in other situations to give him time to work on urgent matters. Mrs. Hoover also undertook redecorating some areas of the White House, using her family’s own money to pay for the re-decorations.

Just a few months after Mr. Hoover became the thirty-first President of the United States, the stock market crashed which signed the beginning of the Great Depression. Mr. Hoover was blamed for all the problems even though many had their beginning before he became President. According to many sources, Mr. Hoover worked hard to alleviate the problems caused by the depression, but the American people did not believe that he was doing enough. In fact, he was considered by some as being aloof and uncaring, which was not really true. It is recorded that he worked long hours every day, but nothing seemed to help. The Hoovers cut back on their entertaining, and Mrs. Hoover gave generously to charities and helped many individuals using her own money without the President’s knowledge.

In 1932, the depression still plagued the land when Mr. Hoover sought re-election. He was handily defeated by the Democrat Franklin D. Roosevelt. Mrs. Hoover was disappointed because she knew how hard her husband had worked. After the election, the Hoovers went to their home in Palo Alto, California, which Mrs. Hoover had designed and had built some years earlier. Mrs. Hoover enjoyed the retirement there — visiting with her sons and her grandchildren and enjoying outdoor activities such as hiking. On January 7, 1944, she had a heart attack and died suddenly. She was buried in California, but, after her husband’s death some twenty years later, her body was moved back to Iowa and the Hoovers were buried side by side in West Branch, Iowa. Both graves are covered with simple marble stones.