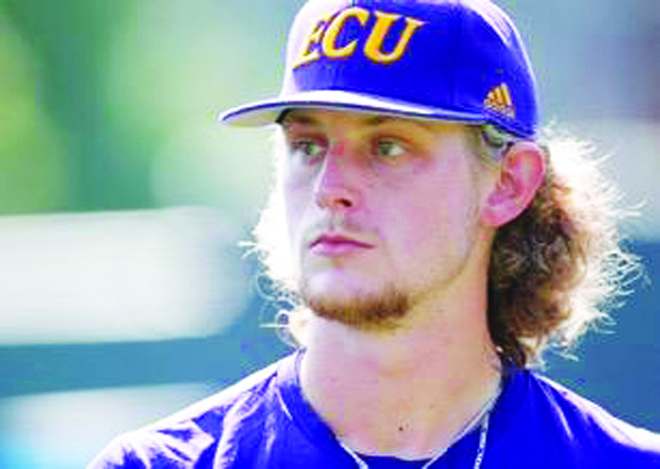 Carson Whisenhunt took the mound in a do-or-die Super Regional baseball game at Vanderbilt in front of an ESPN2 audience on June 12.

His East Carolina Pirates were down one game to none in the best-of-three series, the series winner advancing to the College World Series.

It doesn’t get much bigger than that.

The freshman lefthander from Mocksville showed he was ready for this moment, trading zeroes with Vanderbilt pitcher Jack Leiter. But in the end, the fourth-ranked Commodores were better, winning 4-1 over No. 13 ECU.

It was a heart-crushing setback for the Pirates, who have the most Super Regional appearances of any NCAA program without an appearance in the CWS.

“I don’t care about Omaha – not right now,” ECU coach Cliff Godwin said. “I care about these young men that are hurting, that have worked so hard, that have given blood, sweat and tears into our program for five and six years. They have given us everything and more. And we just weren’t good enough. Life’s not fair. I don’t know why we haven’t gone (to the CWS). We just haven’t knocked the door down. But the percentages say if you keep knocking on the door, the door is going to open. We’re going to knock the door down at some point in time.”

In the top of the first inning, Whisenhunt retired three straight batters after issuing a leadoff walk. In the second, he stranded two runners after allowing a pair of two-out singles. In the third, he got the Commodores 1-2-3 with a pair of strikeouts. In the fourth – whoa, Nellie – he retired the side in order again.

At this point, Whisenhunt had fired 34 strikes in 45 pitches. Leiter had retired eight straight in a big-time pitchers’ duel.

The game, however, changed in the fifth. Whisenhunt retired the first batter before walking the next two. That ended his night. Reliever Matt Bridges got a strikeout before Vandy’s Carter Young got a two-strike, two-out single to left-center. Vandy had a 2-0 lead.

In the bottom of the seventh, ECU’s Josh Moylan led off with a home run to cut the deficit in half. But Vandy scored twice in the  ninth to cap the scoring.

Leiter (10-3) was dynamic for seven innings, giving up two hits, walking three and striking out 10.

Whisenhunt’s line over 4.1 innings was solid: two hits, two runs, three walks, three Ks. His relievers did well. It just wasn’t meant to be on a day when ECU only managed two hits.

“We had guys in the bullpen in the first inning,” Godwin said. “If you don’t win today, you go home. We wanted to make sure we went to our best bullpen guys, which we did. Everybody that we ran out there was really good. They just got four two-out RBIs.”

The Pirates are 1-12 in Super Regional games.