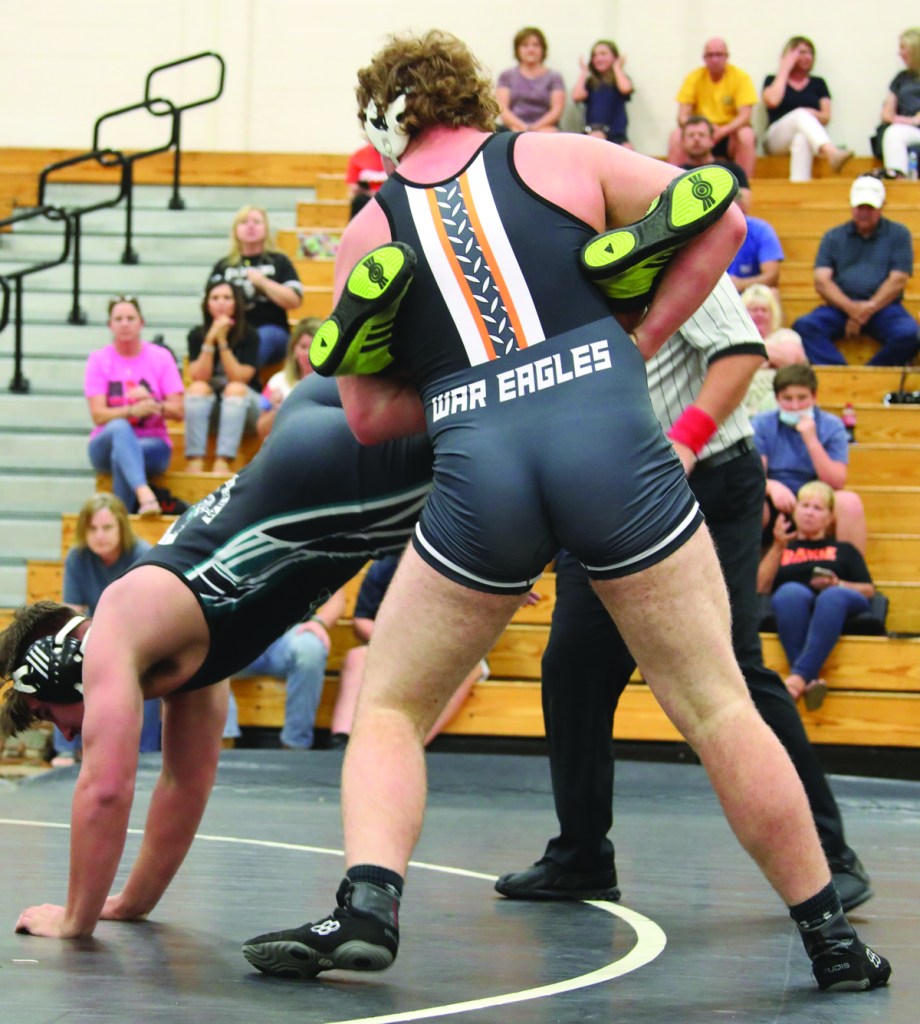 Brysen Godbey, a freshman at 220, takes the upper hand. - Photo by Ashley Bowden

The Davie wrestling team accomplished its mission of winning the Central Piedmont Conference.

West Forsyth made Davie sweat out a 40-33 decision in the first CPC match, but the other league opponents did not stand a chance.

After Buddy Lowery guided the War Eagles to 27 regular-season championships in his 43-year run, Davie finished third in Perry Long’s first year as coach in 2019-20.

“Over half our team was 5-0 in the conference,” Long said, beaming. “We’re excited. They all have worked hard and I’m proud to have them. I see great things in what we’re doing in building a program. People like what we’re doing. When we go to other schools, people like how we act. We don’t come in cocky; we just wrestle. I’ve had coaches tell me: ‘Your kids don’t come here and show off. They’re good wrestlers, but they don’t try to embarrass our guys.’ That’s what it’s about. I preach how we carry ourselves when we go somewhere. You can beat people, but you can also be respectful, too, because you can be on the other end of it at any time. You’re not going to always be on top.”

When Davie faced Reynolds at East Forsyth on June 10, it was another smooth glide for the War Eagles, who claimed 11 of 14 weight classes.

There was a marquee matchup at 132. Snyder had a formidable opponent in Cintrell Johnson, a senior who came in with a 15-1 record.

“(Johnson) has been wrestling 138, but he wrestled down because he really wanted to wrestle Snyder because Snyder bumped him out of the regional last year (when Snyder finished fourth and qualified for the state),” Long said. “They usually don’t volunteer to wrestle Snyder. They got two (extra) pounds and (Johnson) wanted some revenge.”

But Snyder is pretty gifted himself, and he stormed from behind to take a 6-5 decision. It did not start well for Snyder, who trailed 4-1 after the first period as Johnson got two takedowns. But Snyder kicked into gear in the second period, getting a reversal and a near-fall to surge to a 6-4 lead.

“They were in a dogfight, but Snyder put him to his back and that changed the match,” Long said.

Ten guys have winning records, including Frye, who is 14-10 with eight wins in his last nine matches. Collins is 11-8, but Long said the junior is better than his record.