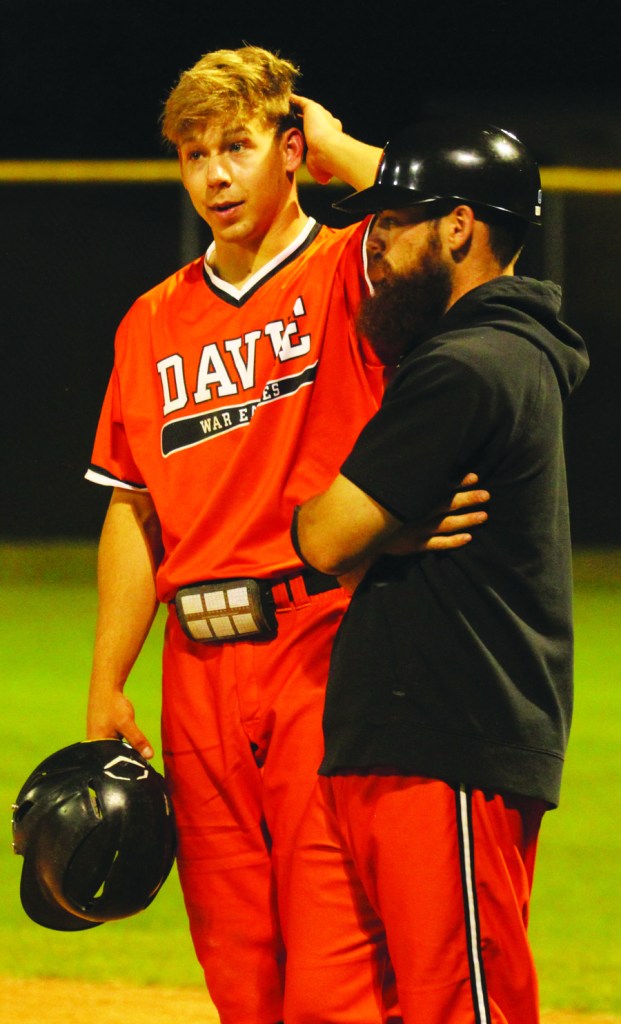 Jaydon Holder couldn’t have faced a more daunting task than the Davie varsity baseball team’s game at Reagan on June 1. Davie’s pitcher was opposed by Josh Hartle, one of the top prospects in the country.

But Davie’s sophomore was undaunted. He pitched like a dream, going the distance and delivering a four-hitter.

The reason Holder and Davie narrowly lost was because someone had to. Reagan scratched out a run in the bottom of the first and held on 1-0 as Hartle hurled a two-hitter.

“Two guys were out there on a mission,” Davie coach Bradley Rudisill said. “Somebody had to lose. I hate it had to be us, but I don’t think you’ll get a better pitching performance out of two guys.”

Davie’s third straight loss dropped it into a tie for third in the Central Piedmont Conference. The Raiders bounced back from an upset loss to West Forsyth to remain in first. The CPC race at this point: Reagan 8-1, East Forsyth 7-2 and Davie/West Forsyth 5-4.

Hartle is a 6-5, 195-pound senior lefthander from King. He committed to Wake Forest as a freshman and has signed with the Deacons. But he might never step on Wake’s campus because he could be a first-round pick in next month’s draft. Prospectsworldwide.com lists him as the 32nd prospect in the country. MLB.com’s Top 200 draft prospect list has him ranked 31st.

“There were 28 scouts there,” Rudisill said. “Not one of them pulled out a radar gun; they were videoing. They’re beyond the radar gun at this point. I’ve said since I saw Hartle as a sophomore that when it comes to just pitching, he’s one of the best ones I’ve seen. The fastball is not overly powerful. He ran it up to 92 in the second inning, but he was mostly around 88, 89. But later in the game when he was able to get that slider over, that made it very difficult for us.”

In the top of the first, Jack Reynolds fouled off three pitches before striking out on a foul tip on Hartle’s 13th pitch of the inning.

In the bottom of the first, Holder retired the first batter and should have gotten the second, but the batter reached when a “major league popup” in the shallow outfield was dropped. A balk advanced the runner. Then Hartle helped himself by driving an outside fastball the other way, a single to left that plated the game’s only run.

“It probably could have been caught, too,” Rudisill said. “We played it safe.”

Carter Boyd singled to center and Austin Hawke walked on four pitches to load the bases with one out. But Holder escaped difficulty by striking out Austin Quarless on three pitches and getting a big play from shortstop Blake Little, who snared Nick Lundquist’s liner.

“He laid out for it and probably cut off two runs,” Rudisill said.

Reed Cunningham broke up Hartle’s no-hitter with a leadoff single to left in the fifth. Rudisill ordered a bunt from Wesley Mason, but it went straight back to Hartle, who got the out at second. That turned out to be a pivotal play when the next batter, Parker Aderhold, knocked a fastball to center for a single.

“If we execute that bunt, I’m probably going to be super aggressive and send the runner (on Aderhold’s hit),” Rudisill said.

With runners at first and second, Trot Byerly fouled off two pitches before going down. On the next pitch, Beaven Arey flew out to right. Hartle was out of trouble.

Davie had one last chance in the sixth as Little reached on a one-out error. After the second out, Little stole second. But Davie’s offense could not rise to the moment as Hartle got a strikeout looking.

Holder took care of the Reagan sixth in nine pitches. The long and lanky Hartle polished off his shutout by throwing nine pitches in the seventh.

In a ho-hum performance, Hartle walked none, struck out nine and threw 57 of 83 pitches for strikes. While going 6-0 in six starts, he has averaged 76.5 pitches per outing.

“He’s just a cool customer,” Reagan coach Gary Nail told the Winston-Salem Journal. “He’s special. It’s just his demeanor. Nothing rattles him; nothing gets him upset. He’s very humble. You would not know that he is as good as he is. He doesn’t brag. He doesn’t talk. He just goes out and performs. He gets it. He’s a great kid.”

The fearless Holder gave Reagan a run. The lone run was unearned. He walked one, fanned four and threw 53 strikes in 78 offerings. His season stats are splendid: 2.75 ERA, three complete games, six walks and 24 Ks in 28 innings. His record is 1-3 because of three one-run losses, including 3-2 to both West Forsyth and East Forsyth.

“On Monday, we worked on his slider. He didn’t have it against East Forsyth,” Rudisill said. “He was really throwing two pitches against East. His ability to command his curveball and his slider and run the fastball in on Reagan’s hands was huge for him. I told him a ton of pro scouts will be there, but Jaydon is such a cool, calm, collected guy it’s like nothing gets to him. Once he got his slider working, he was able to throw the 12-6 (curveball) and the slider and was able to locate the fastball in and out.”

Notes: Davie had three errors to Reagan’s one. … Reagan improved to 9-2. Its losses were 10-9 to North Davidson and 5-3 to West Forsyth. … Davie fell to a frustrating 5-6. “We’ve been in every single game,” Rudisill said. “We haven’t been absolutely dominated in any game.” … The low-scoring struggle evoked memories of an epic battle in 2019, when Davie prevailed 2-1 in Pfafftown thanks to Carson Whisenhunt’s two-hitter. Hartle was the hard-luck loser in that one. In the second meeting that year, Davie won 9-5 to seal the regular-season title at 9-1. Reagan was runner-up at 8-2.