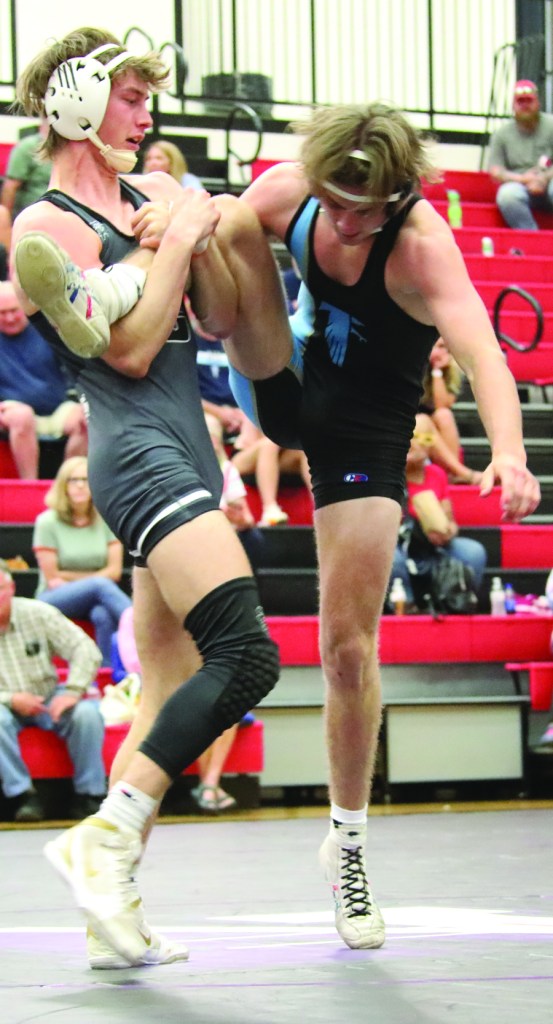 As we learned in 2019-20 – when Davie’s wrestling team slipped to 26-17 and third in the Central Piedmont Conference, its lowest finish since 1993 – there’s no such thing as a sure thing. But Davie wrestling remains the closest thing to an absolute certainty in War Eagle athletics.

The War Eagles are 14-4, winning 13 of 14 and six straight. They’re closing in on their 28th CPC regular-season title.

“I feel like every week we’re coming together as a whole team,” second-year coach Perry Long said. “I’m pleased with this team.”

The War Eagles’ biggest challengers in the CPC were West Forsyth and Glenn. They scratched and clawed for a 40-33 win over West on May 20. They had a much easier time handling Glenn in Kernersville on May 28. Three of the Bobcats’ four wins were forfeits. Davie dominated 49-24.

Brysen Godbey had the only pin at 220. Adam Szewczyk won by injury default at 120.

“They both shot at the same time and Adam knocked two front teeth out,” Long said. “They were in surgery when we finished. It happened to me, so I know how the (Glenn) kid feels. One of my front teeth got knocked out like that. It hurts.”

“They don’t have any guys in the middle,” Long said.

This was a tri-meet. After Davie took down its CPC rival, it mashed Morehead 56-9.

The most compelling matchup was Webb against fellow junior Mekhi Hairston at 160. Webb usually peppers his opponents. Although Webb had to work for a 4-1 decision, he was never in trouble as he kept his perfect record intact. Hairston didn’t score until the third period.

“(Hairston) is built and strong just like Isaac,” Long said. “They look identical (physically). It was a heck of a match. Both of them would get a shot and couldn’t finish it because they’re both so strong and got really good hips. And they’re both athletic. We knew that would be a good matchup. (Hairston) hasn’t wrestled a lot this season – he was 2-0 – but last year he was 17-5.”

Because of COVID, there will be no state dual team playoffs in 2021. Davie has two regular-season dates left, followed by the regional and state meets.

“Isaac can go as far as his mind will let him go,” assistant coach Mark McKnight said. “If he believes it, he can do it. If he believes he can beat the person and doesn’t look at their record and what they’ve done, he can beat anybody out there.

“Jack doesn’t look as much at what other people have done. He stays with what he knows. As long as he doesn’t hit a hiccup, he’s got a really good chance at going a long way.”

Testa has been more than anyone dreamed as a freshman.

“For one, he’s a freshman,” McKnight said. “Two, 182 is not usually a freshman place. That’s a weight where you usually have older kids. We knew he was good, but 21-1 good at that weight is a surprise – a very pleasant surprise.”

Frye, a sophomore who also generally faces older kids, found his stride when he got down to 195. He’s ripped off five wins in six matches to lift his record to 11-10.

“This year starting out he was a little heavy and was at 220,” McKnight said. “When he made 195, everything started to come together. He’s learning the things he can do, the things he can’t do and limiting mistakes.”

In other words, the possibilities are tantalizing for 2021-22. The key will be spreading out the talent so guys like Olmedo and Hire can get in the lineup.

“We’ve still got to continue putting the pieces of the puzzle together,” Long said. “Next year we don’t need all these guys in the same weight class and bumping each other out. If we can get them spread out, we can be really tough next year.”

“I wrestled Olmedo because I bumped up everybody,” Long said. “Snyder tweaked his ankle against Glenn, so Hire stepped in against Morehead and got a pin. We’ve got kids sitting in the wings that could start.