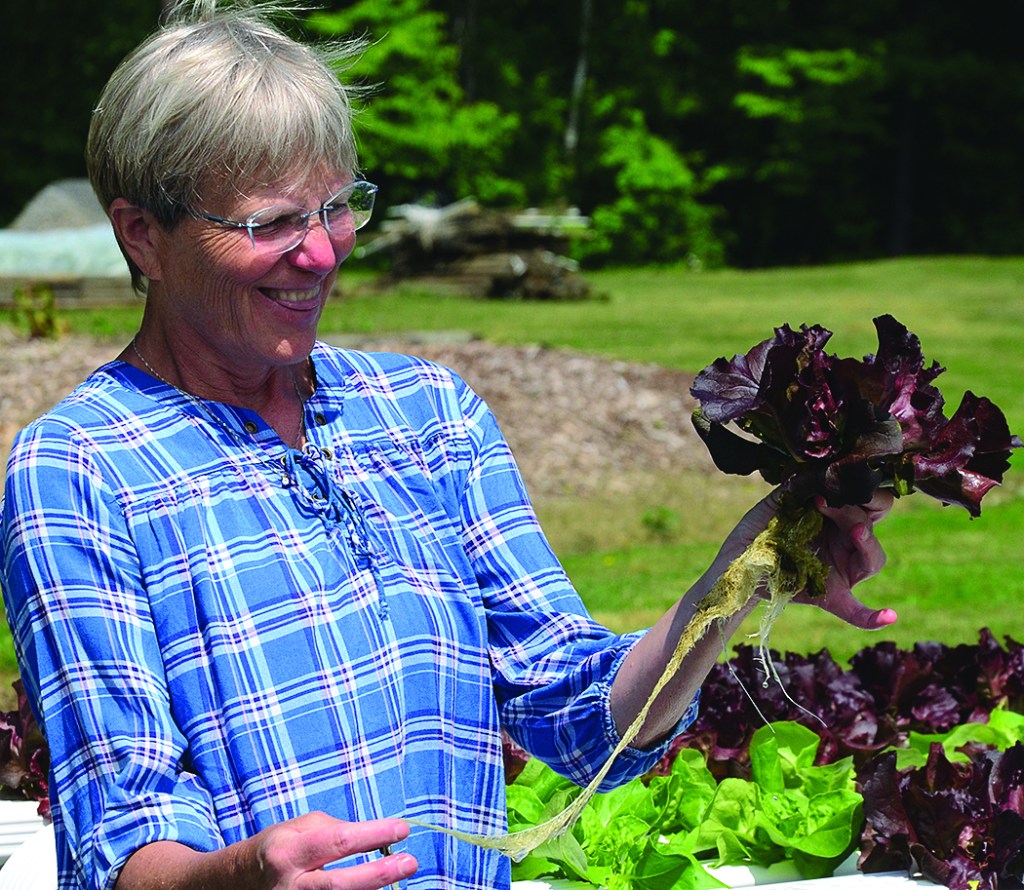 When Ann Anderson worked as a nurse, her days could be quite hectic and stressful.

When she came home, she needed something relaxing to occupy her time.

So she started gardening.

“It was my therapy,” she said.

Now that she’s retired, it’s still her therapy. And with the help of husband Larry, daughter-in-law Nikki and her other children, Yellowbell Farms was born.

Folks can get the hydroponic lettuce, as well as peas, corn, peppers, tomatoes, squash, cucumbers and other vegetables from Yellowbell at the Mocksville Farmers Market, held every Wednesday afternoon at Junker’s Mill of Salisbury Street.

Like most vegetable gardeners, when the produce started coming in – it came in droves – more quickly than her family could eat it or can it. So she started taking veggies to work to give away.

Then folks started asking for the veggies. So she started selling some, starting what she called a “golf cart fund” for their camping trips.

It morphed into Yellowbell Farms, which included fresh baked goods. The baked goods aren’t offered right now, but should be back soon.

“We don’t get bored,” she said. “The business itself has done OK, it pays for itself. And it keeps me out of the psychiatrist’s office.”

Ann and Larry had grown up in gardening families, so the process wasn’t totally new when they started the business on Larry’s family farm east of Mocksville.

“Our specialty is hydroponic lettuce,” she said, bragging on husband Larry for designing and building their own hydroponic system.

“We grow a lot more volume now.” A couple of weeks ago, they had just set out some 461 tomato plants, Big Beef, Chef’s Choice, mini’s and cherry tomatoes.

They harvest on Tuesday evenings and Wednesday mornings, just prior to the market.

Since few chemicals are used on the farm, Ann tells customers to expect a bite mark or two on the veggies.

And the couple isn’t giving in to modern trends. They still grow what they like – even some things such as eggplant and yellow sweet corn that don’t sell well at the market.

“You’re not going to get rich at the farmer’s market,” she said. “We pretty much grow what we like. We grow things that don’t even sell – like eggplant. We like it, but people won’t buy it.

“We can and freeze as much as we can. We’ve been very fortunate that this has been so productive.”

She has questioned occasionally the decision to go from a hobby garden to a business garden.

“I’ll think that I’m not going to do this anymore, then I’ll have a good day.”

What is the saying? A bad day in the garden is better than a good day at work.

Ann Anderson can testify to that.