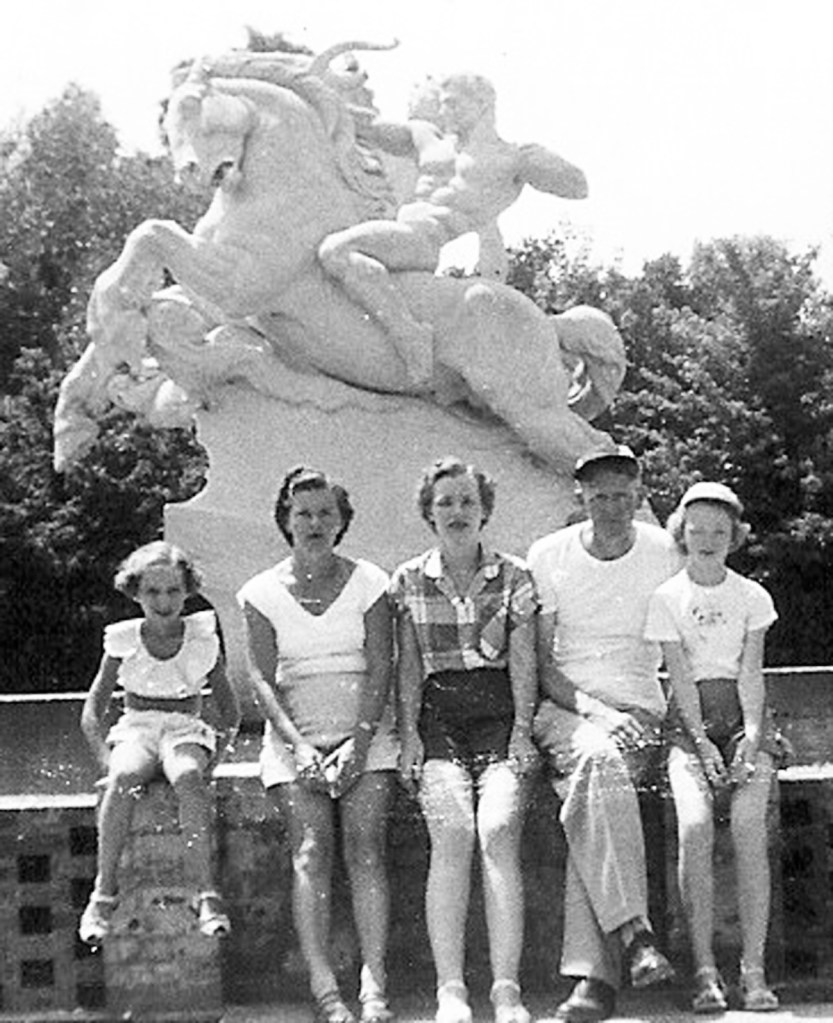 As this is the anniversary of my cousin Natalie Smith Cash’s death, I chose this picture to write about.

This was our first trip to Myrtle Beach in 1951. I was 10 years old, and Natalie was 9. Our parents all worked hard and decided to go on this trip together. George Hendrix, who used to own a store on Main Street, had a house at the beach and rented it to local folks for vacations. The trip to the beach became an annual event for our two families, one that we enjoyed until we girls went off to college.

You must imagine two small town girls who in those days had fairly limited lifestyles. We were used to going to school, church, sometimes to either Salisbury or Winston, and a ride up to the Parkway to view the leaves change colors in the fall. At that time people stayed close to home most of the time and interacted with family and close friends, so you can see what a big deal the trip to the beach was.

In the photograph Natalie is on the left next to her mother and then my parents and me. I assume that her dad took the picture. I was tall and gangly while she was quite short.That is one part that never changed. We were at Brookgreen Gardens and were totally fascinated at the beauty of the gardens and all of the sculptures. We were like children viewing another world as it was all so foreign to us. I think we also went across to Atalaya, the home of Anna Hyatt Huntington, who sculpted many pieces in Brookgreen. It was all magical to us, and we went there every year, but though the gardens were always beautiful, that first visit was always the one we remembered. We were in awe of all of it. Of course, we also made good memories at the old Pavillion, where we went on the rides and to the Gay Dolphin gift shop. And all of us loved going to the various restaurants, which was a fairly new experience then.

Natalie and I both went on to become teachers. We both married and had one son. Both of us lived in Fayetteville at the same time, and we both eventually came back home to Mocksville. We were friends as well as cousins, both only children and like sisters in a way. Unfortunately, while she was still in her 60s, she got sick and moved away to be close to her son and his family. My neighbor, Gail Stewart, and I visited her several times and were preparing to go to see her in the spring of 2013 when we got word that she had died. I know that Heaven is a better place because she is there. I can see her now in my imagination stopping to talk to all of the babies and little children who are there as she did when she was here!

Early settlers of America initially used muskets which were smooth bore, large caliber weapons using ball-shaped ammunition.  At that time period, the lack of precision manufacturing and the need to load readily from the muzzle, musket balls were a loose fit in the barrel.  Thus, a musket ball, when fired, would bounce off the sides as it traveled down the barrel and the final destination after leaving the muzzle was not predictable.  It was difficult to hit a target at 30 yards, much less a bull’s eye.  This lack of accuracy was acceptable in times of battle when troops fired in massive volleys at a fire rate of 2 to 4 times a minute towards the opposing army.  Field tests performed in London, 1811, showed the ‘Brown Bess’ musket could hit, at 100 yards, a target, the size of a cavalry line, 53% of the time.

However, accuracy became extremely important if you were an early settler and you needed to bring food to the table from your hunt.  The concept of stabilizing the flight of a projectile by spinning had long been known and barrel rifling at been invented and used since the 16th century.  So, the early settlers of America soon rejected the musket and started making their own rifle-guns.  For example, the Kentucky Long-rifle was made by German gunsmiths who immigrated to American, bringing the rifling technology with them.

A bar of iron, the length of the barrel desired was hammered to the thickness of about three-sixteenth of an inch and then rolled around a small iron rod with a diameter less than the caliber desired.  The rolled iron was welded together gradually, only a few inches at a time because it was not practical to do more in a single ‘heating’ without also welding the rod that was inside.  The rod was withdrawn from the barrel while it was being heated in the furnace and reinserted when the glowing barrel was withdrawn from the fire to maintain the barrel’s circular shape during the welding process.  This was repeated until the welding work was done.  The barrel was now enlarged by drilling the hole to the desired diameter using a water-powered drill.  The spiral groves inside the barrel were then made using small pieces of steel with saw-teeth on the edges, which served the purpose of filing the necessary spiral channels.  Making a rifle-gun was a long process as the locks, hammers, triggers, guards, ramrods, etc. also had to be made on the anvil.  Originally, the caliber was determined by the number of bullets which could be molded from a pound of lead, usually from 80 to 140.

Our early settlers learned to become expert marksmen because it meant having food on the table or going hungry.  We also need to keep in mind they had only one shot before the game would flee.  Use of rifle-guns also contributed during the struggle for independence by providing Americans an advantage over the British troops, who were using the less accurate ‘Brown Bess’ muskets.  Historians indicate American rifle-guns were pivotal in many Revolutionary War battles, such as the battles at Saratoga, Cowpens, and King’s Mountain.

After the Civil War,  almost all guns were manufactured using rifling (the machining of helical grooves into the internal surface of a gun’s barrel).  The grooves impart a spin on the bullet as it moves down the bore.  When the bullet leaves the barrel, this spin persists and lends gyroscopic stability to the bullet due to conservation of angular momentum, thus improvement in both range and accuracy.  Over time, the name ‘rifle-gun’ was simply replaced by the name ‘rifle’.

After a few days of rain this past spring, the sun popped out. With my camera at the ready, I donned hiking boots and sunglasses for a Tanglewood walk. This was a day the birds posed for me. To be honest, I’m not a pro when it comes to identifying birds. I have a friend who often corrects me, and I’ve learned a lot, but sometimes no amount of research will tell me if the fuzzy picture I took of a small perching bird flying away is a this or a that. Still, I enjoy taking pictures and researching the birds with my stack of books and online aides.

Walking the horse trail by the Yakin River, the Great Blue Herons were active as they flew between their nests and the water. Further down the path, a Belted Kingfisher flew landed on a stump at the edge of the water. His shaggy crest looked like a mohawk from my angle.

As the trail opened to a field between the trees, a red-winged blackbird flew from bush to bush while a crow cawed from a nearby tree. A male Northern Cardinal landed on the trail in front of me for a moment before it flew away. Overhead, a European Starling rested on a branch, while a sparrow — I believe it was a Chipping Sparrow — sat nearby.

At one point, male and female Northern Cardinals played tag in the sky above me, weaving through the trees. Another Belted Kingfisher posed for the camera, but a Blue Jay refused to be still for his photo op.

Three miles later, I exited the trail, and a crow or raven (they look alike to my untrained eye) took flight and tipped its wing, which I took to mean, “See you later.”

There’s beauty everywhere. I hope you take the time to enjoy the world we live in.