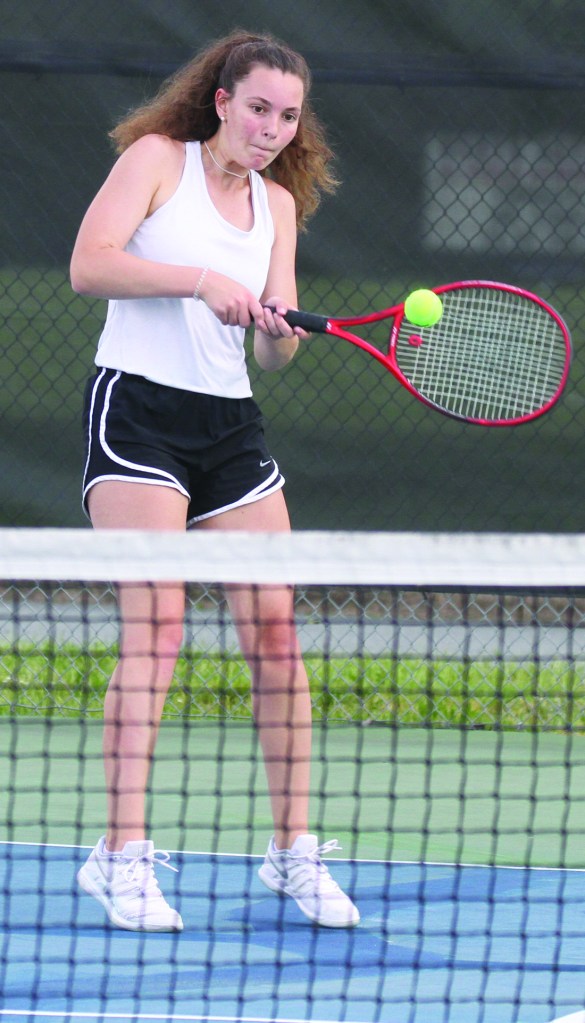 Sophomore Karlie Quinn and the sister duo of senior Laura Newsom and sophomore Leslie Newsom finished third in the Central Piedmont Conference Tennis Tournament at Reagan on May 19.

Quinn won two of three matches in singles. Laura and Leslie raised their doubles game to a new level while going 3-1.

“Two matches before the tournament, they did not play well at all,” Davie girls tennis coach Collin Ferebee said of the sisters. “I talked to them about communicating and finishing the job, and they communicated and then they finished the job. I was really proud of them for rebounding in the tournament to finish third.”

Although the War Eagles only enjoyed one win among their other three tournament entries, there were plenty of positives.

In the fifth/sixth match in doubles, junior Abby Fletcher and sophomore Sarah West Marklin went the distance before losing 10-8 in the third-set tiebreaker. They went 1-2 on the day.

Junior Elise Weidman and freshman Gabby Thompson got dreadful draws in singles, yet they held their own in defeat. Weidman went toe-to-toe with East Forsyth’s top player in an 11-9 decision.

“Elise got a bad draw,” Ferebee said. “She got East Forsyth’s No. 1 in the first round, but she fought really well the entire time. She’s been playing the best tennis I’ve ever seen her play in her three years at Davie.”

Thompson lost 10-4 in the first round, but it was a heartening effort.

“She got Reagan’s No. 1 and at one point was only losing 5-4,” he said. “For my No. 7 as a freshman to take on Reagan’s No. 1 and it be 10-4, I was mighty impressed with her. She’s working hard, asking for help and staying after practice to work more. I’ve got a lot of good feelings about her future.”

The CPC Tournament was held at a weird time – in the middle of the season instead of at the end.

“Forsyth County was worried about when their exams were going to be and that the tournament might overlap with that,” Ferebee said.

“This was not our best match, but I still saw a lot of good things,” Ferebee said. “Reagan has a good team.”

Two days after the tournament, the War Eagles hosted first-place Reynolds. The Demons had little trouble improving to 7-1 overall and 6-0 in the CPC, winning 6-3. It was the same score as the meeting on May 6.

“We have a good base and we’re going to keep working hard,” he said after Davie slipped to 2-4, 1-4. “This spring is going to set us up for the fall. We’re getting a lot of good experience.”