Track is back: War Eagle boys dominate in field events 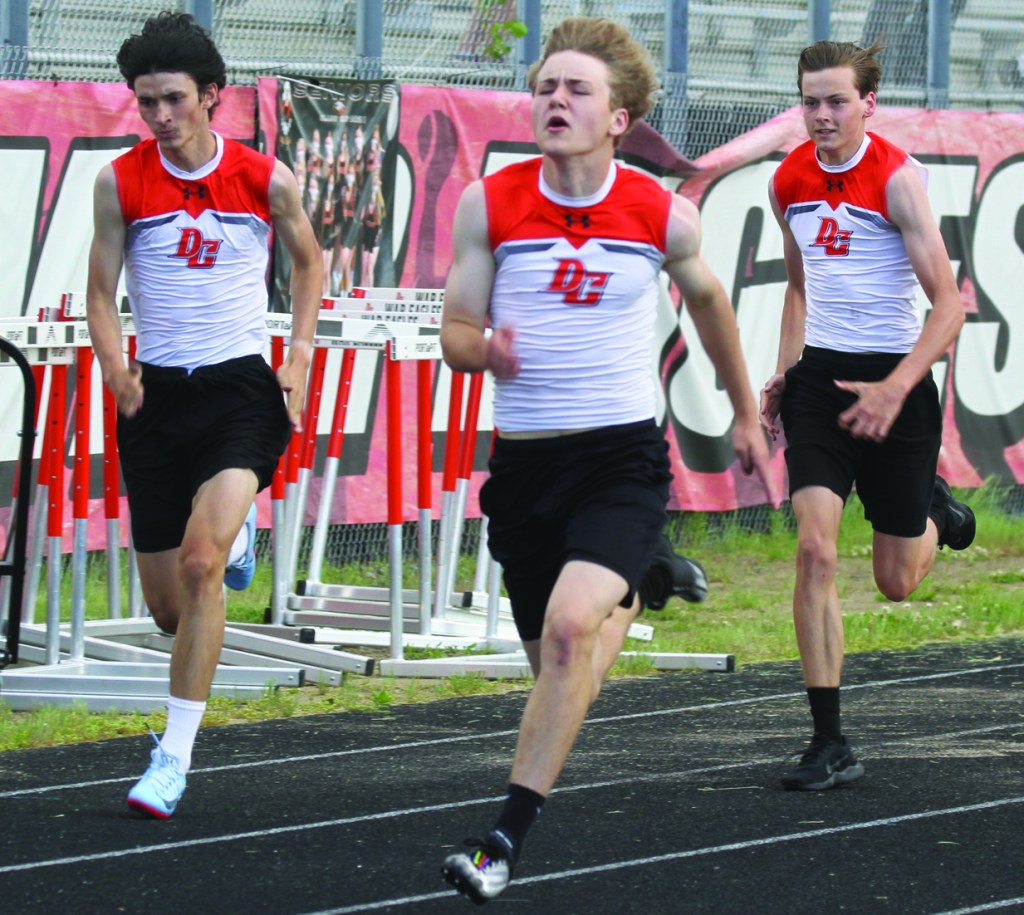 CJ Phelps, Sam Rosser and James Little in the 100.

After a two-year hiatus, the Davie outdoor track teams returned to action May 5 as they hosted a CPC tri-meet against West Forsyth and Reynolds.

The Davie boys went toe to toe with a powerful West Forsyth squad and finished second while defeating Reynolds. The War Eagle girls finished third behind West and Reynolds.

The highlight of the meet was the performance of junior thrower Spencer Williams, who set two state records for the junior class. His throw of 60-6 in the shot put eclipsed the mark of 59-7 set by West Forsyth’s Mason Ellis in 2019. Williams then demolished the field in the discus. His mark of 186-4 broke the 25-year state junior class record set by Larry Brock of South Brunswick in 1996.

Spencer’s younger brother Palmer claimed second in the discus and fourth in the shot, while Gavin Townsend picked up a point in the team competition with his fourth-place effort in the shot.

Both of Spencer’s marks are the best throws in North Carolina among all classes this season.

The dominance of the Davie boys in the field events was also evident in the jumps.

On the track, JT Allen continued his dominance in the hurdles by winning the 110- and 300-meter events. His time of 41.04 is the fifth-fastest time in the state this spring. Ian Boger placed fourth in the 110 hurdles and second at 300 meters, while Austin Boswell was runner-up to Allen at the 300-meter distance.

In the sprints, Sam Rosser placed second in the 400 while Poag grabbed fourth in the 200.

The Davie distance crew turned in several personal bests. Andrew Brown claimed second in the 1600 in 4:46 while Caleb Young was fourth. Sophomore Owen Sulecki broke the 5:00 barrier for the first time as he crossed the line in 4:55. Nate Brooks was third in the 800 in 2:09.

“For our first meet, I thought everybody competed hard,” coach Rob Raisbeck said. “We had lots of personal-best performances and Spencer was just incredible in the throws. The only negative is that due to the late start to the season and overlap with other sports, a lot of student-athletes that have competed for us in the past have elected not to join us this spring. There were at least six events on the girls’ side where we didn’t even have anybody compete. Fortunately several of our distance girls have joined us after soccer season concluded and will race at our next meet.”

War Eagle Stadium will be the site of the CPC Championships May 25 and the Midwest 1-A and 4-A Regionals June 18-19.