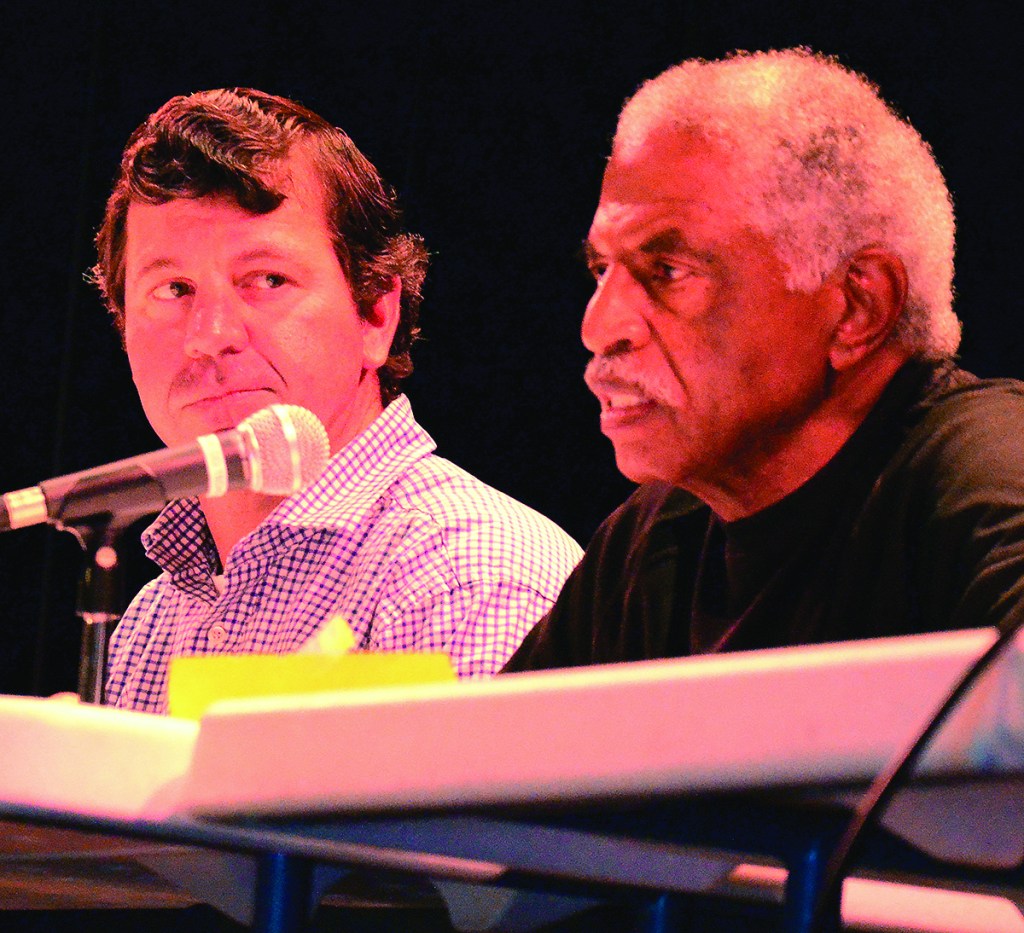 The final decision is expected from the town board June 1 when it meets at 6 p.m. at the Brock Performing Arts Center.

Board chair Alan Lakey and members Clint Junker and Neal Cheek voted to recommend the rezoning. Members Stevie Dulin and Diane Foster voted against the residential rezoning. A commercial rezoning on adjacent property was unanimously recommended.

Adam Barr, a planner with Davie Developmental Services, reminded board members to consider all uses allowed in the proposed districts.

“We love Mocksville and we think it’s a great place to do business,” McKnight said, pointing out that all residential units will be sold at market value, not on a subsidized scale, and would range from single-family homes to townhomes and patio homes. All would be purchased by the occupant, he said.

“We want to give you a wide variety of different housing types. We envision beautiful greenways that would connect to your park and elementary school. Based on ya’lls plan for growth, we’ll fit right in,” McKnight said.

He estimated costs of homes in the development at $325,000 and up. They plan to build greenways and trails and turn them over to the town. As for traffic, the Department of Transportation will require an analysis, and the developers will have to conform with the results, McKnight said.

Tommy Turner, like many other speakers, said traffic would become a bigger problem than it already is. Country Lane, according to neighbors, is already the “I-40 Bypass,” he said. “The added traffic is going to be a major, major, major problem for the people who live there.”

He questioned the impacts on schools and other services, entrances and exits. “We worked hard to make our neighborhood a great place to live.”

John O’Reilly agreed with the traffic concerns, and added that the massive construction traffic needed to build such a development would be even worse. “You’re going to open up more traffic there? That’s absurd.”

Farren Shoaf, representing a landowner who would sell for the development, said the town should take advantage of nice, middle-class housing in an area that is already growing. “Davie County has a real inventory problem when it comes to housing,” Shoaf said.

Jeri Cozart gave some history of the development of houses along Country Lane – back when it was just that – a country lane.

“Now, it’s a thoroughfare,” she said. “The traffic, it’s horrific. As we continue to develop, I ask that we not lower our standards of development,” asking that the town go for quality rather than quantity.

“It’s about money,” she said. “Mocksville and Davie County has allowed hodge-podge growth. Vote in the best interest of Mocksville, not the developer.”

Ron Stroupe, Sterling Place developer and Country Lane resident, said that traffic on Country Lane needs to be “policed better.” He urged the board to keep high standards. “I feel quite confident the completed project will be quite pleasing to everybody in this room.”

Lester Cozart also remembers the days when houses were first built along Country Lane. He said there are 13 apartment complexes within two miles of his home. “I see some advantages to what you want to do, but I’m against it.”

Alice Hanes, whose family owns property nearby, spoke in favor of the project, saying landowners should have some say in how to develop their own property. She also asked that board member, Stevie Dulin, ask to recuse himself from the vote because he lives off Country Lane. He did not.

“People like views of open property,” said Jack Koontz, who owns nearby undeveloped land. “People like me are paying taxes on that property. I support this. You are going to have development all across the county. What they’re talking about building is the type of property I’d like to see.”

Realtor Doris Short said Davie has done a good job of recruiting jobs. “What we don’t have is housing for them to live in.”

When Gilleece said developers would be lucky to get two houses per acre in the project, board member Diane Foster questioned why a rezoning is needed. She also said more information on impacts should have been provided. She said there is no reason to double current allowed density and made a motion to deny the request. “When we rezone, anything can happen. You have a beautiful development, I’m not trying to shoot you down.”

After some discussion, she withdrew her motion and then made a motion to table the request to see if developers could go ahead without a rezoning and if the town could add conditions that would help the neighbors. Dulin made the second. It was defeated on a 3-2 vote.

The rezoning was ultimately recommended on a 3-2 vote. A rezoning for commercial property closer to Yadkinville Road was approved on a 5-0 vote (Dulin failed to cast a vote, making it a yes vote).

Partnering with sheriff for town police coverage idea not…