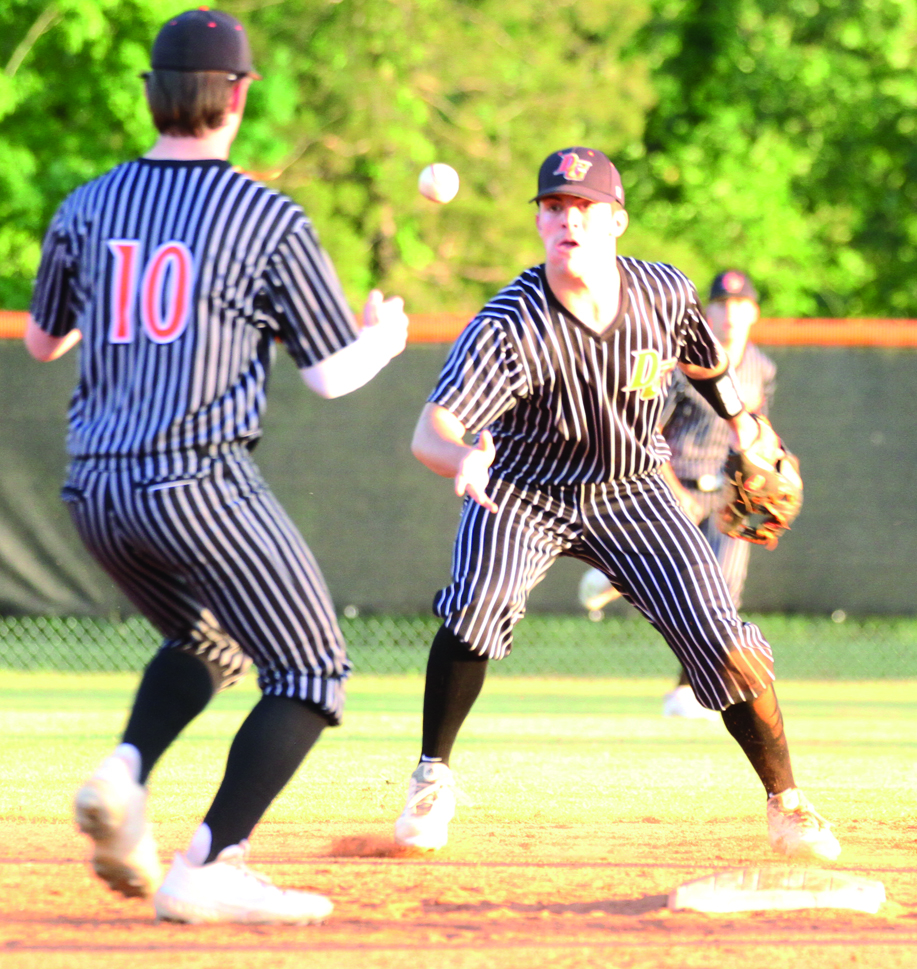 Davie’s varsity baseball team built at 2-0 lead at West Forsyth on May 11. It got more than it could have hoped for from pitcher Jaydon Holder. It smelled the roses.

The 2-0 lead vanished in the bottom of the sixth and the Titans handed Davie an excruciating 3-2 loss.

It was the first Central Piedmont Conference setback in three games for Davie (2-3 overall). After getting swept by East Forsyth, West (2-3, 1-2 CPC) earned its first league win.

Despite the agony of late-game defeat, Davie coach Bradley Rudisill took solace in the way his boys competed.

“As a coach and a competitor, that’s what you want to have – a chance to win it,” he said. “We gave ourselves every chance to do that. I couldn’t be any prouder of our guys. Win, lose or draw, our guys competed to win.”

Rudisill was thrilled with his sophomore lefty. Holder twirled six innings of six-hit ball in his second varsity start. Only one of West’s runs were earned. He walked none and struck out seven.

“That’s Jaydon. I watched him during the fall pitch against some really, good teams and he was able to do that then,” he said. “That’s when I knew he was going to be a varsity-level arm that we could truly use.”

Holder was opposed by senior Kobie Cushing, who will play at Queens in 2022. The righthander threw a three-hitter for 6.2 innings with 2 walks and 7 Ks.

“He touched 89 (mph),” Rudisill said. “But we had good at-bats against him. He threw a no-hitter against Mt. Tabor in his first outing. He got roughed up a bit against East Forsyth, but I knew he was going to be a tough opponent – and he was. Up to this point, he’s definitely the best arm we’ve seen.”

In the top of the first, Davin Whitaker got a one-out single, but he was erased by a 4-6-3 double play. In the bottom of the first, A West single was negated by catcher Daniel Lawson throwing him out trying to steal second.

“(Holder) shut down their run game, which is a big part of their repertoire,” Rudisill said. “They attempted one stolen base and Jaydon gave Daniel a shot to throw him out. That shut down the run game for the rest of the game.”

After 2 hits and a sac bunt, West had runners at second and third in the second. Third baseman Whitaker threw out a runner at home before Holder got a strikeout looking.

“He ran a fastball in on his hands for strike three,” Rudisill said. “That was a huge confidence-boost.”

In the West third, a two-out error put the tying run at second, but a ground out to shortstop Blake Little ended the inning.

Davie pushed its lead to 2-0 in the fourth. Lawson walked. After a strikeout, courtesy-runner Justin Collins stole second. He advanced to third on a ground out and scored on a wild pitch.

After hitting a double, West had a runner at third with one out in the fifth. Holder induced a grounder to Little for the second out. A bouncer to Whitaker resulted in the third out as Davie maintained the 2-0 lead.

Davie threatened to extend its lead in the sixth. Lawson and Cunningham were aboard with one out, but Cushing got out of trouble.

“We had a 2-0 lead and we probably could have been up 4-0,” he said. “We had a base-running mistake and a few crazy things. We had opportunities to blow the game open. We shot ourselves in the foot.”

With 6 outs to go, Davie was in position to win. In a span of 6 batters, the lead was gone. West’s No. 2 batter, junior Payton Martin, homered to left on an 0-2 pitch to end Holder’s shutout bid. “It barely got out,” Rudisill said.

After a Titan singled and another Titan reached on a bunt, Holder got two outs. But with runners at second and third, the tying run scored on a passed ball. The go-ahead run scored on an error.

“We were about to wiggle out of it,” Rudisill said.

Give Davie credit for battling until the bitter end. With two outs, Beaven Arey was hit by a pitch. A relief pitcher took over for Cushing and issued a walk to Little. With the tying run in scoring position, a strikeout ended the game.

The crushing end spoiled an astonishing effort by Holder, who has an ideal temperament for a pitcher. Oh, and there’s this: He has 10 Ks and zero walks on the year.

“We had a game plan and Jaydon executed it,” Rudisill said. “He made big pitch after big pitch. He’s as cool as a cucumber. It’s fun to be around guys like that. He’s going to be a good one. He’s already a good one. He pitched an absolute heck of a game.”