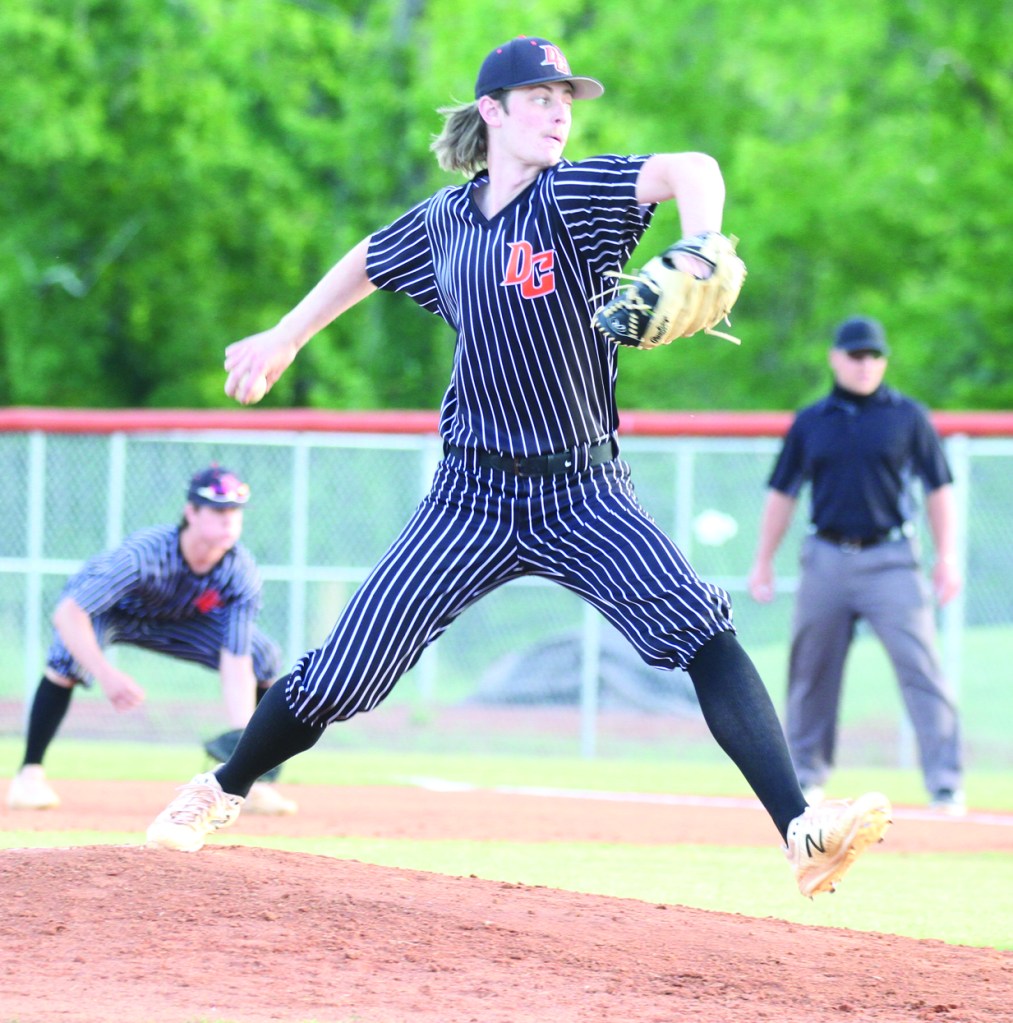 In the first matchup on May 11, West Forsyth’s varsity baseball team pushed across three runs in the bottom of the sixth inning to squeeze past Davie 3-2.

In the rematch at Davie on May 13, the War Eagles walked a tightrope and prevailed 2-1 by manufacturing a run in the bottom of the seventh.

How much fun is baseball in the Central Piedmont Conference?  It’s pure madness when Davie and West get together. This was the sixth straight meeting decided by one run. (Each team has won three.)

Two narrow losses to West would have been devastating for the War Eagles. But they shook off the stinging loss in Clemmons and salvaged a split to remain in contention. Reagan and East Forsyth entered the week tied for first with 4-0 league marks. Davie (3-3 overall) is next at 3-1.

In both games, Davie’s pitcher performed exceedingly well. After Jaydon Holder worked six admirable innings at West, Zach Rodgers spun seven sparkling innings at home. He scattered seven hits, walked one and kept West off-balance for 107 pitches, 70 of which were strikes. His second complete game in three starts improved his record to 2-1 and lowered his ERA to 1.55.

The Davie senior righthander went against a worthy sophomore, Harrison Lewis, who got a no-decision after going five innings. Both starters gave up one unearned run.

West got a two-out single in the top of the first, but left fielder Wesley Mason gunned him trying to stretch it to a double, with second baseman Jack Reynolds applying the tag.

Davin Whitaker and Davie’s defense put on a show. In the second, the Titans had two on with one out. Third baseman Whitaker turned an unassisted double play.

“It was a hard ground ball down the third-base line,” Rudisill said. “Davin lays out for it, tags third and throws to first. That was a turning point in the game.”

In the third, Reynolds and Blake Little turned a 4-6-3 double play.

An error gave Davie the game’s first run. With two outs in the third, Reynolds walked. He advanced on a wild pitch. Daniel Lawson hit a routine infield popup. It was dropped and Reynolds scored.

Davie had a chance to add to the lead in the fourth when Whitaker blasted a pitch over the right fielder. But he was thrown out trying to stretch a double into a triple. The out loomed large when the next batter, Justin Collins, singled.

“I thought he was going to make it standing up,” Rudisill said. “Their shortstop made a heck of a play. It was a perfect throw, perfect tag. If you’re going to draw up a relay, that’s exactly how you would do it.”

In the West fifth, Rodgers got a pair of 6-3 outs from Little to strand the tying run at third.

Reynolds got something brewing in the fifth, singling, stealing second and then stealing third. Lawson walked and courtesy-runner Parker Aderhold stole second. But Lewis got out of it by inducing a ground out.

Just like the first meeting, West rallied in the sixth. The threat started with a one-out double that should not have happened. (“We had miscommunication on a routine popup, and it fell between two outfielders,” Rudisill said.) A passed ball pushed the runner to third. Whitaker got a grounder, held the runner at third and got the out at first. But then a hit to right tied it at 1-1.

Rodgers retired the first two batters in the seventh, but a single and a wild pitch put a Titan in scoring position. Rudisill walked to the mound.

A grounder to Little kept the score tied.

Mason, who had zero varsity at-bats before April 27 but has become a steady contributor, rescued the War Eagles in their final at-bat. He walked on four pitches; his speed would decide the tense battle. After Beaven Arey was called out on runner interference, Mason stole second.

“They were running a very aggressive bunt defense,” Rudisill said. “We weren’t going to bunt; we were going to steal Wesley and then bunt him to third to get Blake up with a guy at third.”

It played out differently. Little hit a bouncer to the right side. The first baseman bobbled it and then his flip to the pitcher hurrying to the bag was off target.

Smelling blood, Mason scurried from second to home on the play. Davie had a walk-off win over its archrival. Fist pumps flew.

“We never stopped Wesley coming around third because there was so much going on at first base,” Rudisill said. “I think even if they would have gotten Blake out, Wesley might have scored.”

The War Eagles were outhit 7-5, but they played flawless defense while West (2-4, 1-3 CPC) committed three errors. They scratched and clawed throughout two games and came away with a split.

“You’re not going to rack up 10 hits against quality pitchers,” Rudisill said. “You’re not going to score 12 runs and blow teams out. This is good baseball. You’ve got to take it however you can. You’ve got to battle, and they battled and battled and battled. To see them against a veteran West Forsyth team – with (future) college guys on that roster – and play two one-run games is definitely a positive sign for us moving forward.”

It was Rodgers who made it possible. Seemingly on a mission, he emptied the tank for seven innings and relied on his defense on a night when he only struck out three.

“He commanded his slider, he ran the fastball in on their hands and threw the curveball against lefties,” Rudisill said. “He had it all working. Once he went through the lineup, he started dialing in his changeup. He had four pitches he could go to.”