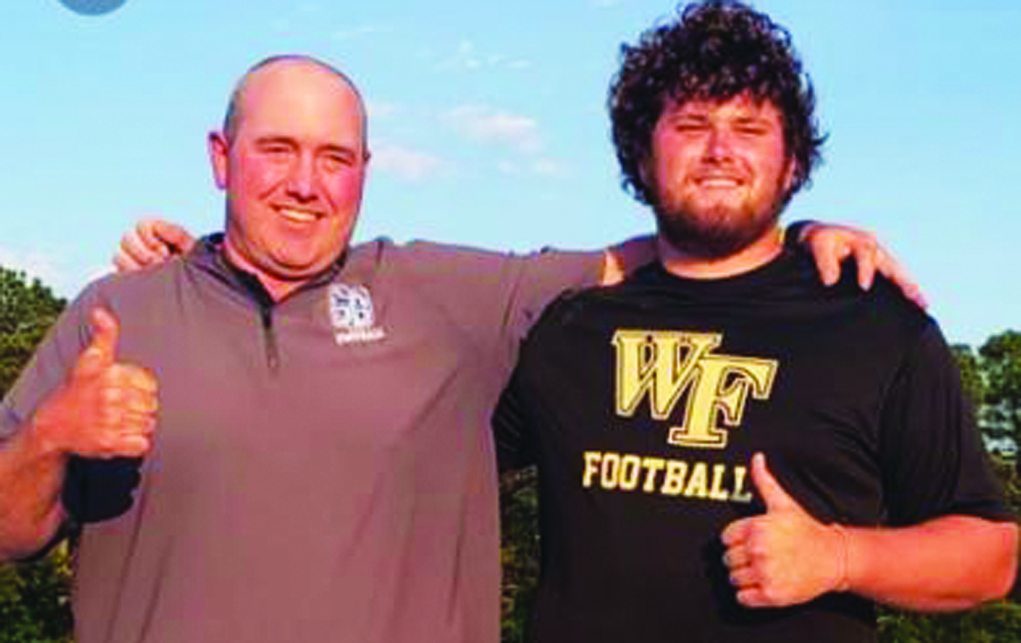 Unless you were to encounter a devoted fan of Appalachian State football or were an intense follower of the Highland Games, if someone asked you to identify the name Larry Brock, you would probably respond with a blank stare. Even to those in the North Carolina high school track and field community, the name does not readily come to mind. One family in Davie County, however, has known about Brock for some time, even if they had never met him.

Almost a quarter of a century ago, Brock was a high school junior at South Brunswick near the North Carolina coast. Competing in the discus for his high school track team on June 1, 1996, Brock stepped into the discus ring at a small meet at rival West Brunswick and made North Carolina track and field history. He unleashed a throw of 185-5 that established a state record for the junior class – a record that would stand for just a month shy of 25 years.

From that eventful day in 1996, it would be another eight years before Davie track star Spencer Williams would be born. Now their names are etched next to one another in the state record books.

Brock was a massive 320-pound offensive lineman who went on to garner all-conference accolades at Appalachian State. After graduation he started a teaching career that took him to Myers Park, West Harnett, North Brunswick and finally back to his alma mater, South Brunswick, where he has been a teacher, assistant football coach and throws coach for the track team the last four years.

For many of those years, Brock was also renowned as a champion of the Highland Games, touring the world and competing in an odd assortment of athletic events traditional to the Scottish clans. There is the caber toss, which is like throwing a telephone pole end over end. Then there is the sheave throw, which involves hurling a 20-pound hay bale. And, of course, there is the stone throw where competitors heave a 56-pound boulder for distance and height.  In 2010 Brock won the Highland Games World Championship in Victoria, British Columbia.

Williams entered Davie nearly three years ago as a 6-3, 260-pound freshman. Like Brock, Williams excels on the football field. And he, too,  fell in love with the discus and shot put. Now, as a 6-5, 300-pound junior, Williams has emerged as the elite thrower in the North Carolina high school ranks.

As a freshman, Williams threw the discus 138 feet, good for the 57th-best mark among all high schoolers in the state. His shot put effort of 42-2 ranked him No. 207. By his sophomore year, Williams had improved dramatically and his throw of 50-7 was good enough for the No. 17 mark in the state during the indoor season and a sixth-place finish at the 4-A Indoor State Championships. After the spring outdoor track season was cancelled last year, Williams continued his meteoric rise not only in the state but nationally as well. During summer competition, he threw over 175 feet in the discus. And this past January, Williams unleashed a massive throw in the shot put of 60-3.5, a distance that ranked him 11th in the country and No. 4 in the junior class.

And then, on May 5, 2021 the War Eagle outdoor track and field team returned to action for the first time in nearly two years. Davie entertained CPC rivals West Forsyth and Reynolds for a conference tri-meet. And those in attendance witnessed history.

The first event of the day was the shot put. Williams calmly stepped into the circle and when the dust settled, the officials announced that Williams had thrown farther than he ever had before. In fact, his mark of 60-6 was farther than any junior in North Carolina high school history had ever thrown before. The new junior class state record was 11 inches further than the previous record of 59-7 set by West Forsyth’s Mason Ellis in 2019.

A short while later, the competitors in the discus took center stage. After a strong throw on his first attempt, and a foul on the second, Williams readied himself for his third and final attempt. A controlled spin built up a tremendous amount of centrifugal force and as the disc left Williams’ right hand, it sailed an astonishing 186 feet and four inches, another junior class state record. The previous record was the 185-5 mark set by Brock over two decades ago.   Williams’ marks in each event are also the top distances among all throwers in North Carolina thus far this year. The discus mark is currently No. 10 in the country and No. 4 among juniors.

After an amazing week spent rewriting the record books, the Williams family hopped in their car and headed to Oak Island, where they like to enjoy a bit of family time and relax. Of course, that meant Spencer had to find a place to practice his craft. As he has done dozens of times over the years, Spencer and his dad, Paul, drove over to South Brunswick to get in some throws. After a while they were greeted on this lonely Saturday by a man and his 11-year-old daughter who was an aspiring thrower herself. The families struck up a conversation and the visitor asked if Spencer was a college athlete. Paul Williams replied that his son was a high school junior and had just broken the state junior class record in the shot and discus. He went on to say that it was kind of a coincidence that they found themselves at South Brunswick that day because the previous record was held by an alumnus of that school, a man named Larry Brock.

The gentleman stood next to his daughter, extended his right hand and said: “Well, hello. I’m Larry Brock. It’s nice to meet you. And congratulations on breaking the record.” Saturday evening on his Facebook page and then in a phone  interview Sunday morning, Brock recounted the chance meeting with the Williams family.

“I was lucky enough to meet this young man and his family at the very place where my throwing journey started,” Brock wrote. He went on to say: “I’m glad somebody finally broke the record. It had been around too long.”

When discussing his life and throwing career on that Sunday morning phone call, Brock relived his freshman year when he first fell in love with track and field. He talked about how his first coach knew just enough about the sport to point him in the right direction and give him some tips about throwing technique and proper footwork.

“My coach used to chew tobacco. He would spit on a couple of places in the discus circle where my feet should be when I would spin and told me to hit those spots,” said Brock.

Today, there are countless videos on YouTube on how to throw the shot and discus. Williams and his parents as well as his younger brothers, who are also aspiring throwers, have become tremendous students of the sport, constantly seeking out ways to improve technique in search of that edge that every athlete looks for.

Though the technology may have changed, there has always been one constant among champion athletes: the will to win and the drive to do whatever it takes to be the best. That means long hours often training alone regardless of the weather. Doing it day after day, every day. And in Williams’ case, throwing into makeshift nets hung between trees in his backyard when students were not permitted to be on the Davie campus due to the pandemic.

In 1996 Larry Brock capped off his junior year of high school with a state record and a gold medal at the North Carolina State High School Track and Field Championships. Twenty-five years later, after occasionally training at the exact same spot as the man whose record he broke, Spencer Williams hopes that history is about repeat itself.