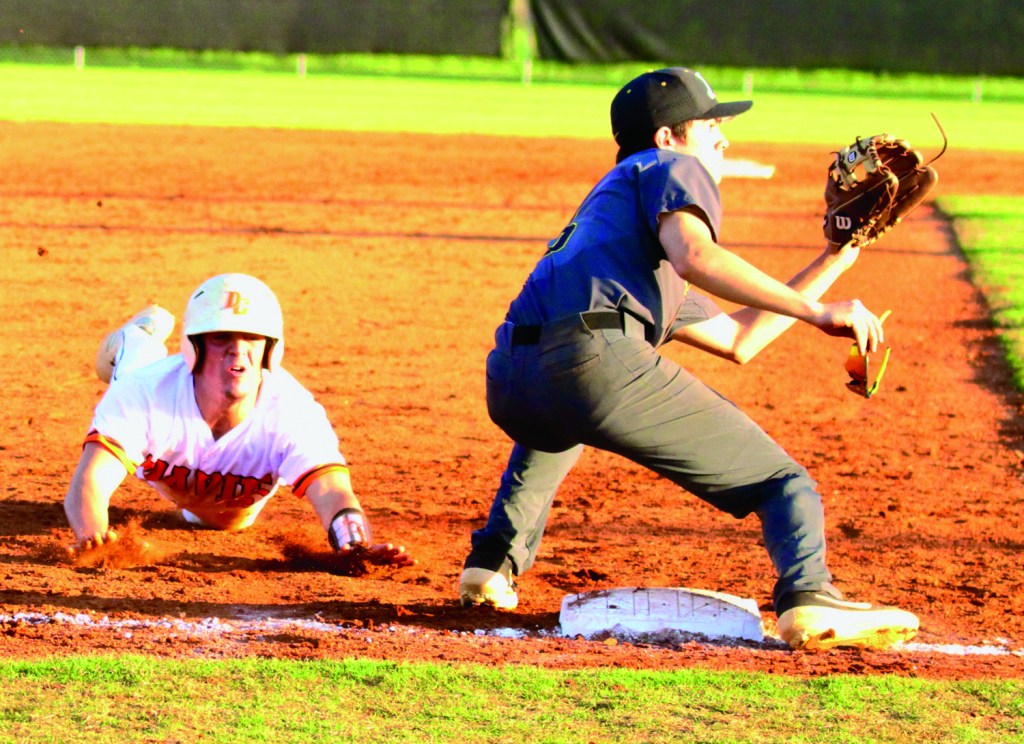 Davie varsity baseball never started 0-3 between 1996-2020 and it wasn’t going to drop the first three games of 2021 on Davin Whitaker’s watch.

After stumbling out of the gate, the War Eagles answered the bell in the Central Piedmont Conference opener against visiting Reynolds on May 4. Whitaker went 4 for 4 with two runs and a stolen base as Davie broke out with an 8-3 victory.

This made Whitaker 6 for 7 on the season with five runs and three steals. An .857 average is unsustainable, even for superhumans, but it’s a breathtaking start to a varsity career for a sophomore.

“He’s super athletic,” coach Bradley Rudisill said of Whitaker, who moved up to the two hole in this game. “He has a good instinct for the game. He works really hard. He asks a ton of questions. He just understands how the game needs to be played. Two of his hits are bunts. He’s kind of got the whole package.”

Blake Little and Daniel Lawson added two hits each as Davie beat Reynolds (1-2 overall) for the third straight time and the eighth time in nine tries.

After losing to Carson and South Iredell, the bottom of the first changed Davie’s entire mojo. After Zach Rodgers retired the side in order in the top of the inning, Davie dropped a massive seven-spot on the Demons. Little doubled, Whitaker bunted for a hit and then singles from Lawson, Reed Cunningham, JT Bumgarner, Justin Collins, Wesley Mason and Beaven Arey chased Reynolds’ starter. At that point, Davie had six runs on eight hits. Little greeted the reliever with a single.

“It set the tone for the entire game,” said Joey Anderson, who was filling in for Rudisill during his quarantine. “We swung the bats and looked good. We hit the ball good in the later innings, too. We just didn’t put it together when we had people on base.”

Davie finished with 13 hits to offset five errors. The pitching from Rodgers, a senior, and sophomore Jaydon Holder was a major factor. Rodgers gave up one earned run in five innings, walked none and struck out four. Holder worked two scoreless innings and struck out three in his first varsity appearance.

“Zach threw great,” Anderson said. “He hit his spots – he moved the ball in and out real well – and his offspeed kept people offbalance.”

“Zach understands what his stuff is and doesn’t try to do more than what he’s capable of,” Rudisill said. “He knows his ability to mix pitches is going to make him a really good pitcher.”

Last year as a junior, when Davie played five games before the coronavirus shut everything down, Little had two hits in 14 at-bats.

But now we’re seeing Little in full bloom. He went 2 for 3 with two runs and a RBI as Davie completed a sweep over the Demons in Winston-Salem on May 8.

That extended a white-hot streak for Little, who is 8 for 15 with two hits in each game.

“He’s really worked his tail off from the fall to now,” Rudisill said. “He has definitely come into his own. Bluefield State is really excited about getting him on campus. He’s gotten stronger. He’s really been a good boost in the leadoff spot.”

Davie took a 1-0 lead in the first when Little was hit by a pitch, advanced on a passed ball and scored on a Jack Reynolds fielder’s choice. Davie pushed the lead to 3-0 in the third, when Arey and Little singled before Whitaker walked. Lawson hit a sac fly and Cunningham drove in one with a hit.

After Reynolds closed within 3-2, Davie got an insurance run in the seventh. Mason singled, stole second and scored on a hit by – you guessed it – Little.

Junior Bayden Hazlip was terrific in his first varsity start on the mound. He scattered five hits in 5.2 innings, walked one and fanned seven to even his record at 1-1.

“He’s a good one,” Rudisill said. “He just gets his work done. He threw really well against Carson, but situations happened in that game that were out of his control. Today he didn’t have a walk til the sixth inning.”

Sophomore Jackson Sink picked up a clutch save in his varsity debut. He got the final four outs, stranding the tying run in a tense seventh. “They had two on with their best hitter up,” Rudisill pointed out.

Davie got one hit from Cunningham, Mason and Arey.