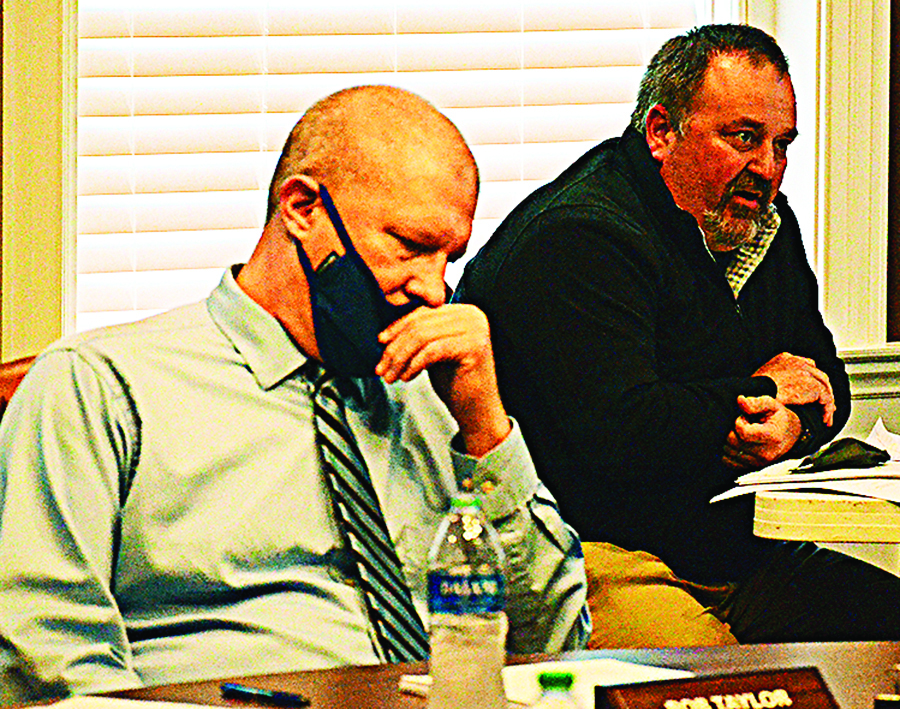 Board members Rob Taylor (foreground) and Brian Williams wrestle with the decision to disband the police department. - Photo by Robin Snow

After hearing five residents tell them to keep the police department they respect and count on, members of the Mocksville Town Board on Tuesday unanimously voted to disband the department and contract with the Davie County Sheriff’s Office for law enforcement coverage.

Board members and new town manager, Ken Gamble, said the move was about nothing more than economics.

Those residents questioned that reasoning.

Former Cooleemee Police Chief and Mocksville resident Tony Hartle said he experienced something similar in Cooleemee, when one town board member put it upon themselves to disrupt the department. Eventually, he said, the problem went away.

“As you think of moving … think about the amount of control you might have. Support them (officers) by letting them do their jobs.”

He told board members to think hard before making a decision that would disrupt people’s lives.

Carol Yow also stood up for the department, giving officers credit for saving her neighborhood from a gas explosion when she called in the middle of the night because of a strange noise. Their response was quick and effective, she said.

“Noone is perfect, but please don’t take security and peace of mind away from me,” Yow said. “I stand with the men and women of blue.”

Local attorney Lynn Hicks gave examples of the good work of the officers. “We are forunate in Mocksville,” she said. “That’s got a lot to do with the respect held by this community for our people in uniform.”

She said it is easier for police officers to get to know folks in a town than it will be for sheriff’s officers. “I encourage you not to disband the Mocksville Police Department.”

Jennifer Jackson, manager at Cooper Creek Apartments, questioned the motives for the move.

“Is this really over finances? The issues started from a particular friend not getting to be chief. The town board allowed this.”

She also accused a town board member – not by name – of leaking information from closed meetings that benefitted their agenda. That information, she said, went to a fake Facebook account for a Carlos McDonald.

Brandon McGaha from the Police Benevolent Association said his organization is looking for fairness.

“You have a police department with great people,” he said, adding the town has different levels of city government working to harm the police department. “They haven’t had the opportunity for success.”

He urged the board to continue funding the department and let the manager fix any problems. “Give these officers a chance. This is not a broken police department.” McGaha also expressed concern that the town follow the council-manager form of government.

Two board members – who had supported the department in the past – said it had lost the confidence of the public.

“We’ve gone through hell (the last three years) with this department,” said Rob Taylor, an assistant district attorney familiar with the work of the department – work he had praised in the past. He said he doesn’t get any of his information from Facebook, but from talking to people.

Taylor said that nine out of 10 people he talked to thought it best to go ahead with the sheriff’s department contract. He also touted the economic benefits of the move.

“It’s not about a vendetta, or defunding the police,” said board member, Brian Williams, who said he received similar feedback to Taylor when talking to people.

“Local government should always look to be more efficient.”

He said that Bermuda Run has an effective community policing model through a contract with the sheriff’s department, and the move will take politics out of the equation.

“I have wrestled with this,” Williams said. “I support law enforcement. The decision is in the best interest of the town and its citizens.” 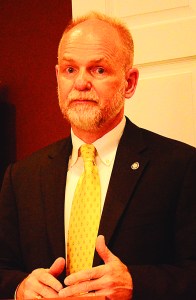 Gamble addressed the board – and at one time asked those gathered in an outside hall to be respectful when they started to grumble after he said something they didn’t like.

“This does not have anything to do with police officers – trying to get rid of them as individuals,” Gamble said. He said all officers had been professional with him, and coming from a law enforcement background, “My blood does run blue.”

It’s more about a $600,000 shortfall in funds for the upcoming budget and an estimated  $1.3 million in savings the move would realize in three years. At the same time, he said it would mean more patrol officers on the ground.

“This is not the fault of our officers. People are going to lose their jobs at no fault of their own. This is purely a financial recommendation. It’s all about the numbers.”

He said traditionally, towns create police departments to get a higher level of coverage. In this case, he said, the town will get more street-level coverage for less money.

Two board members commented on the issue near the close of the meeting, when the mayor asks them if there’s anything they want to say.

Eric Southern called it a tough decision, and thanked past and present police personnel. “I think it’s the best direction for the town. The town is going to be better off,” Southern said.

“I’m not happy about it,” said Amy Vaughan-Jones. “It’s very bittersweet to me.” She said she wished the town had followed an assessment of the department more closely. Town residents, she said, deserve a cost-effective police department.