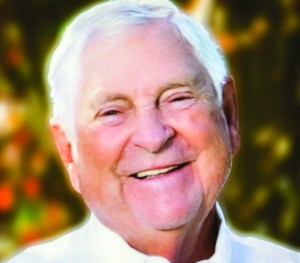 Raymond Jasper “Jack” Perkins Jr., known affectionately to his grandchildren as Pop Pop, died at his home in Advance on Sunday May 2, 2021.

Born on Oct. 27, 1938 in La Grange to Minnie Bruce Britt and Raymond Jasper Perkins, he graduated from East Carolina University in 1960 and served as a middle school history teacher before joining Lamar Dean Outdoor Advertising. In 1972, he followed his dreams and started his own business, AdSign Corp. Throughout his tenure at the helm of the business, AdSign became a fixture in the Clemmons and Winston-Salem communities, displaying public service announcements on its trademark billboard ranging from marriage proposals to patriotic messages. He was most proud of his work with RJR Sports Marketing installing billboards and electronic message centers all over the country. His dedication to AdSign was overshadowed only by his dedication to his family. He was the pillar of his family and was ever-present in the lives of his children and grandchildren, never missing an important event and never failing to prepare them for all of life’s challenges, from cold weather to trips overseas.  He adored his grandchildren and loved spoiling them more than anything. When he wasn’t spending time with his family, he enjoyed traveling, especially to the beach and his vacation home in Topsail Island, making an impression wherever he went and never meeting a stranger nor failing to give them a nickname. He was a golfer and a loyal fan of the Carolina Panthers.

He was preceded in death by his parents, Minnie Bruce and Raymond Perkins and siblings, Betty Britt Howard and James Perkins.

A funeral service was held at Hayworth-Miller Kinderton Chapel on Wednesday, May 5 at 1 p.m. with Chaplain Randy Hillman officiating. Burial followed at Westlawn Gardens of Memory.