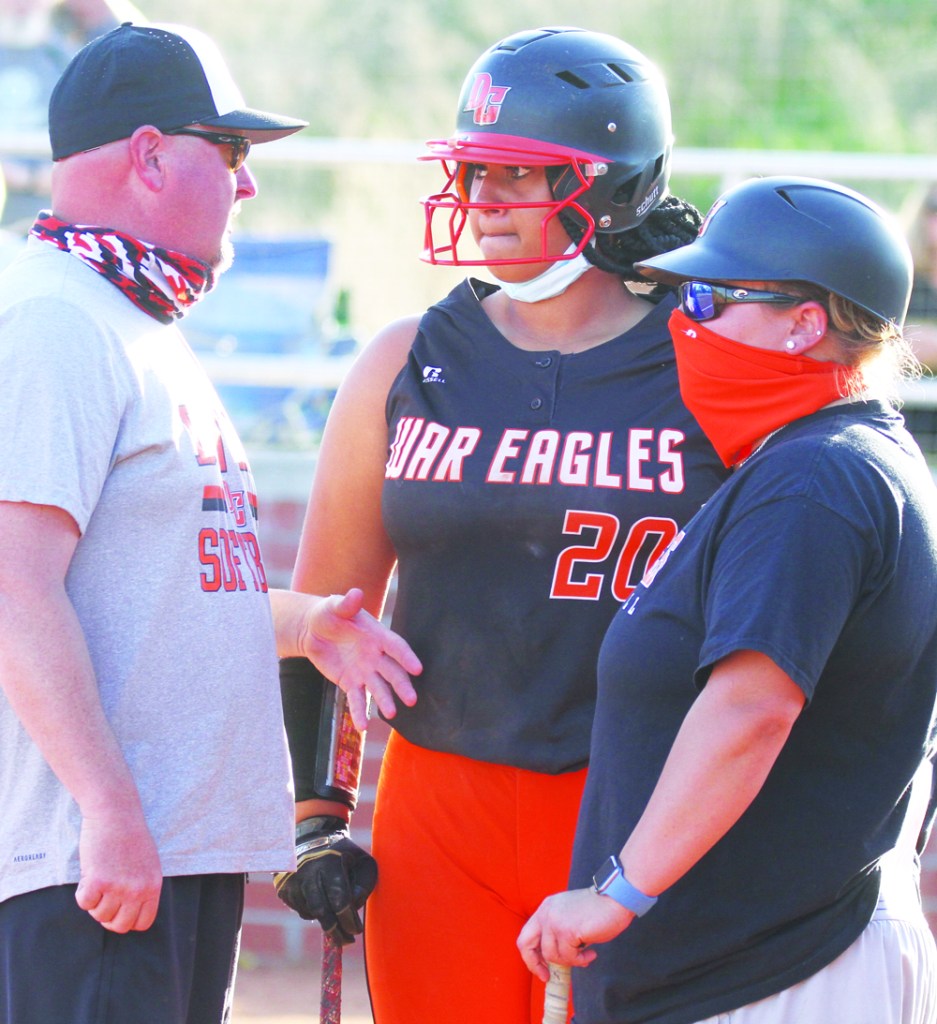 The moment of truth was the bottom of the fifth inning. West Forsyth had just used two walks and two hits to erase the Davie softball team’s 2-0 lead and forge a tie at 2-2. Davie’s momentum was gone – if only momentarily – and its state playoff hopes were hanging in the balance.

An electrifying answer sent the War Eagles to a 10-8 win over visiting West in the Central Piedmont Conference Tournament semifinals on April 26.

The teams tied for second in the regular season. Davie beat West 7-2 on April 6; the Titans beat Davie 9-8 on April 12. Davie won a coin flip to host the game.

“We got to where we were laying off (Ambur Howerton’s) changeup, which held us off the last game (in the loss to West),” coach Morgan Wyatt said. “We started swinging at better pitches. We tell them that if you swing at good pitches, good things happen. They got in their groove at the right time.”

After West cut into Davie’s seven-run lead, S. Dirks went deep in the sixth, her sixth homer bumping the margin to 10-5 and tying sister London for the team lead in that category.

But the Titans made Davie sweat it out in the seventh. A triple, homer, error, single and hit batsman chopped the margin to 10-8. They had two on with no outs, but Chesney Shook retired three straight batters to preserve Davie’s ninth win in 13 tries.

“That goes to show that no amount of runs is enough,” Wyatt said. “We misplayed a couple ground balls. We threw one away. It ended up working out.”

After making 10 relief appearances, Shook made her first start of the season in the circle. She responded with the first seven-inning performance by a Davie pitcher in 22 games (Rachel Bostic went the distance in a 5-1 win at Reagan in 2019). Throwing 78 of her 127 pitches for strikes, she walked just one, scattered 11 hits and ran her record to 7-1. Even though she gave up six earned runs, her ERA remained solid at 2.73.

“Chesney did really well,” Wyatt said. “I could tell she was getting tired at the end, but she dug deep and finished for us.”

Notes: The scorching L. Dirks rapped her 10th double, the most such hits in nine years (Sadie Lagle hit a record 13 doubles in 2012). This extended her hitting streak to nine games. It was the sixth straight game in which she banged out at least two hits. … West had won four of five before falling to 6-7.

After the first five War Eagles made outs, Simpson singled and stole second. Grimes singled to tie the score at 1-1. Kaylyn Nuckols, a pitcher who had seen five at-bats all season, made the most of her offensive opportunity, hitting a double that provided a 2-1 lead over visiting East Forsyth in the CPC Tournament final on April 29.

But the great Keirston Deal is tougher than a cheap steak, and after Nuckols’ big hit, the junior lefty who has committed to South Carolina was exactly what East has come to expect, the same dominant pitcher Davie has seen three times this season.

After Nuckols’ shining moment, Deal retired 11 of the next 12 War Eagles and didn’t give up another hit until S. Dirks’ single in the sixth.

Davie’s 2-1 lead was short-lived. In the bottom of the second, East batted around after the first two batters were retired. When the dust settled, five runs were in and it was 6-2.

Deal finished with a four-hitter, walking one and striking out 12. Of her 101 pitches, 73 were strikes. She’s also awfully good with the bat, going 2 for 3 with two doubles and four RBIs from the three hole.

Davie got three of its four hits in the second. The other War Eagle to get a hit was S. Dirks.

Notes: Freshman pitcher Addison Hendrix turned in her finest work of the season, giving up no runs in 4.1 relief innings. … Davie entered the playoffs with a 9-5 record. … In the other semifinal, East crushed Glenn 12-2.