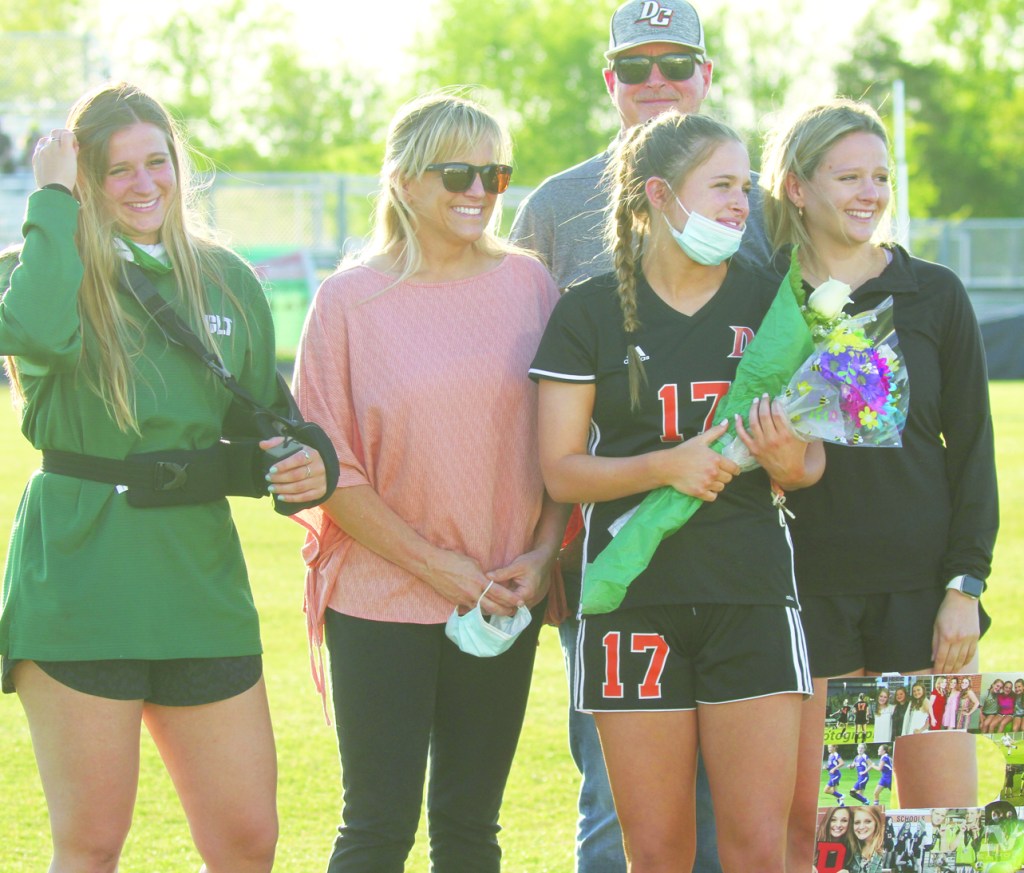 Rachel Devereaux with her family.

When the Davie and Glenn varsity girls soccer teams met on April 22, it was 1-0 deep into the second half and Davie had to work for a 3-0 win.

When the teams faced off on April 26, Davie won emphatically, 6-1.

“We really didn’t play our best (in the 3-0 win),” coach Nathan Stephens said. “Tonight we talked about doing what we needed to do so we could have a good, fun night. With it being Senior Night, we wanted to get things done fast and early so we wouldn’t have to be in (the tight-game) situation we were in last week.” 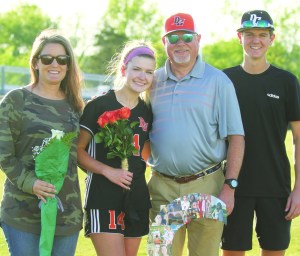 Caroline Bliss with her family.

Davie scored 3 goals in each half as the Bobcats (0-11) remained winless. Rebecca Devericks led the way with two goals. Lexi Kulis, Katie Shupe, Emma Helton and Rachel Devereaux had one each. Devereaux and Holt Carter had one assist apiece as Davie evened its overall record at 5-5.

Stephens lavished praise on the three seniors: Caroline Bliss, Devereaux and Helton. “I think it’s one of the better Senior Nights we’ve had in a while,” he said.

He said of Bliss: “Caroline will fool you. She’s sweet on the exterior, but she will surprise you. You don’t see it coming, but when you’re not watching, she will get you. She’ll throw down with you. She gets in there and she’ll throw down. You just don’t see it coming. She’s very competitive. She’s been a steady constant since we started and someone you could always count on to be there. I used to call her the doctor because it’s kind of like Jekyll and Hyde, and she didn’t really know what I was trying to say because I don’t know if they read (Dr. Jekyll and Mr. Hyde) anymore. But that’s how she operates on the field. She’s this little sweet girl, and then when she’s playing she becomes Hyde.”

He said of Devereaux: “She’s tough. She’s one of the toughest people I’ve coached, and she is someone you can joke around with and fun to be around. As a player, she’s mentally tough and physically tough.”

He said of Helton: “Emma’s a unique individual. If you do not like Emma, there’s something not right about you. I don’t know anyone that does not like Emma. She always has a good attitude, does what you ask, always works hard. Everything we do that’s not even related to soccer, she’s always in the middle of it.”

Nearly a month after Davie pulled off a huge upset over East Forsyth, a blowout loss on April 27 wasn’t what anyone from Davie had in mind. The host Eagles got their redemption – and then some.

Davie stunned East 2-0 on March 30. East was quite ready for the rematch, jumping to a 3-0 halftime lead. It continued to pour it on in the second half.

East improved to 4-1-1 since the loss to Davie. The only defeat during that stretch was 1-0 to unbeaten Reagan.

“Right off the bat, it was ‘oh, crap,’” Stephens said. “I don’t know if it was from the high from the previous night or what. I said: ‘Ladies, they’re gunning for us tonight.’ Nothing went right.” 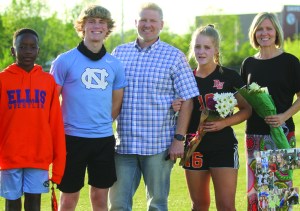 Davie had three seniors, including Emma Helton with her family.

In their final game of the season, the War Eagles were hopelessly overmatched by visiting Reagan on April 29.

Notes: Davie finished fifth in the six-team CPC. Reagan went 9-0-1, West Forsyth 6-1-3, East 5-4-1, Reynolds 4-5-1, Davie 3-7 and Glenn 0-10. … Two days following the final game, Stephens announced his resignation as coach of the varsity boys and varsity girls. He led both programs for three seasons. “I have stepped down from men’s and women’s soccer at Davie,” he posted on Facebook. “I love the game and the kids and wish them all well. So many things I would like to say, but that would take a long time. It’s time for me to get back to my family and focus on them.” … Both programs have seen a revolving door of coaches. For the varsity boys, there have been 12 head coaches in 33 years. In the fall, Davie will have its sixth coach in eight years. Next spring, the girls will have their fourth coach in six years.