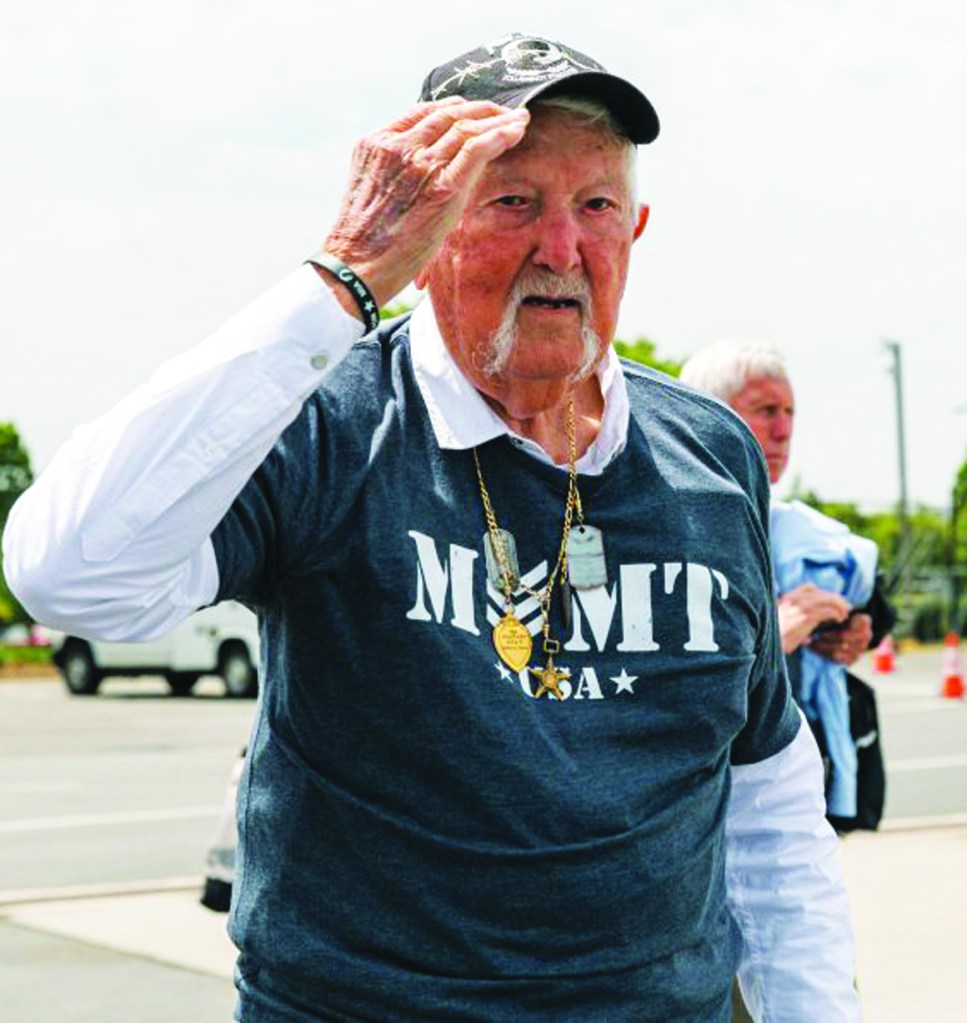 He was barely into adulthood, and he was in a prisoner of war camp in Germany. The little food they got was bad. The water was bad. When they lay down to sleep at night, the lice would eat them up.

Frank weighed 212 pounds before he got captured. By the time he got out, he weighed 117.

Harold Frank is perhaps the last surviving member of the 357 Infantry Company G, which fought during the early days of the Normandy Campaign. He was drafted in May 1943, two years before the Germans surrendered and WWII ended.

For decades after the war, Frank wouldn’t interview with the Enterprise Record. He didn’t want his wife, Reba, to know what he went through, so he waited to share his story until after she died.

But he always carried the memories of the POW camp.

“I think about that a lot – too much, actually,” he says. “My redhead kept my mind off of that as much as she could. I had nightmares, sure, a lot of them.”

Now, Frank is telling his stories. Stories of growing up in Davidson County, of riding miles to work on a bicycle, of leaving his life in rural North Carolina at 19 years old. Stories of fighting, of being captured, of escaping, of getting captured again.

His stories could fill a book — soon, they will. As fewer and fewer WWII veterans are alive to share their experiences, Frank’s stories shed light on a war that was more than just history to him.

One day in January, Jordan Gaines and his mother, Kristy, drove to Mocksville to hear those stories.

Jordan had heard about Harold Frank long before they got a chance to meet. His grandma, who lives in the same county as Frank, told Jordan he ought to visit him when he got a chance.

A cadet in his second year at the U.S. Military Academy, Jordan is 20 years old — one year older than Frank was in 1943 when the WWII draft pulled him from the life he knew. When Jordan went to see Frank, he figured he’d only be there for about 45 minutes. But three or four hours passed while Jordan listened to Frank’s stories.

Once he was back in the car with Kristy, Jordan said, “Mom, you realize he’s never been to West Point?”

“Yeah, I heard him say that,” Kristy responded.

Kristy’s immediate reaction was one of uncertainty.  “Who am I?” she thought. “I’m just a cadet’s mom. I don’t know that many people at West Point. How could we get him there?”

With COVID-19 restrictions, Kristy knew a trip like this wouldn’t be easy. But the wheels were already turning. She reached out to Ann Sisk, the president of West Point’s North Carolina Parents Club.

“Well, who do we know?” Kristy asked.

They emailed Bill Trivette, the president of The  West Point Society of North Carolina Piedmont.  Once he heard Frank’s story, he was on board. Another source encouraged them to contact the history, military instruction and modern warfare departments at West Point.

They continued contacting anyone they thought could help. Before long, as more and more people got looped in, they found themselves in a huge email chain.

“And then all of a sudden, everybody was like, you know what? Let’s do this,” Kristy said.

For many in the area, Frank’s story hits home. After all, he’s a North Carolinian through and through.

He was a 19-year-old country boy from Davidson County when he found out he got drafted.

“I didn’t want to be no soldier,” he said. “I wanted to be a farmer. But I turned out to be a better soldier than I was a farmer.”

Frank became a Browning Automatic Rifle, or BAR, shooter. He’d go on to be awarded a Purple Heart, Bronze Star, French Legion of Honor and the Order of the Long Leaf Pine — North Carolina’s highest award.

He also wouldn’t be able to eat a full meal for 10 years after the war.

A month after D-Day on July 7, 1944, Frank was trying to cross a road when he thought a horse kicked him. He was knocked flat on his stomach before realizing he’d been shot in his shoulder. Not long after that, he and his fellow soldiers were taken prisoner by Germans.

The bullet remained in his shoulder for more than three months after that, until a German doctor removed it. He was in the POW camp for about 10 months, fearing infection and starvation as soldiers around him continued to die.

But if there’s one thing a country boy knows how to do, it’s survive.

Frank knew how to use a slingshot to kill rabbits. He hid them in his pants, and at night he and his friends would eat them, wasting no part of the animal.

In April 1945, the prisoners were ordered to march out. Through tears, Frank recounts not receiving water or food — or being allowed to sleep for four days. After a while, he and a fellow soldier used the opportunity to escape. He’d learned to speak German during his time at the camp, and tried to use it to his advantage while on the run. But after a few days, he and his friend were recaptured.

Frank was once again a POW, but this time, not for long. In May 1945, after the Germans surrendered, his guards told him and his fellow prisoners that they were free to go. They didn’t believe it at first, but the war was over and he would finally be able to go home.

The first four months Frank was a POW, his family had no idea where he was. He’d been reported missing in action — he could’ve been dead, for all they knew.

After getting back to North Carolina, Frank got married and started working for the R. J. Reynolds Co. The couple had three sons and built a life together in Davie County.

Despite the horrors he witnessed, Frank counts himself lucky. He was able to come home after the war. 9,388 Americans are buried in the Normandy American Cemetery and Memorial in France.

There are few surviving veterans these days, more than 75 years since World War II ended. Of those who are still around, some prefer to avoid sharing their stories and reliving the trauma they endured.

When Mark Hager, a historian at Lenoir-Rhyne University, met him a few years back, they were in a cafeteria setting at a luncheon. Hager, a veteran himself, recognized Frank’s POW hat and asked him about his unit. Frank said he was with the 357 infantry, which Hager recognized as being from WWII. He was shocked that Frank served as far back as the 1940s.

“We lost a lot of good men,” Frank replied.

They got to talking about Frank’s military experience, until Hager ran out of napkins to write on. Frank told him he hadn’t shared his war stories while his wife was still alive, but he felt like now was the time to tell them.

Hager spent the next three years writing a book about all that Frank went through. Hager learned Frank’s stories slowly, as Frank worked through them and became more comfortable talking about his time in the POW camp.

In a bit more than a year, Frank’s story as told by Hager — from experiences living during the Great Depression, to grim details about the worst of warfare, to surprisingly funny tales from life on a Liberty ship — will be widely available. His book, “The Last of the 357th — The Harold Frank Story WWII” will be released by the publisher on June 6, 2022, the 78th anniversary of D-Day.

Together, Hager and Frank traveled to New Orleans to visit the National WWII Museum. A year later, they spent two weeks in Europe visiting the battlefields where the 90th Infantry Division fought and participated in the 75th Anniversary of D-Day Ceremony.

Hager was also one of the people who would accompany Frank on his trip to West Point. After hearing how Frank’s days blended together from his stories in the military, he had one key piece of advice to share with the West Point cadets: always keep a journal with you.

“Write something down, even if it’s a paragraph each, each day, that you can go back on,” Hager said.

Frank, he said, is now in a place where he does want to speak about the war, but the stories, dates, time and places are difficult to pull apart — especially since so many veterans block out their memories to avoid nightmares. It’s taken three years for Hager to tell Frank’s story because it’s so important to be careful when asking about someone’s combat experience, he said.

“No matter the situation you go through in life, meeting Harold and hearing his story has got to help you in whatever circumstance you may be in,” Hager said. “It’s just remarkable.”

Even after the bulk of the West Point trip was ready to go, Kristy and those folks from her email chain had a major piece of the puzzle to solve:

How were they going to get him there?

Flying in, followed by a train ride and a rental car, would be a complicated and exhausting ordeal. Then Kristy ran into her CEO at Movement Mortgage, Casey Crawford, at the gym one day and they got to talking.

Kristy briefed him on Frank’s upcoming trip and said she was looking for a private plane. Having heard the story, Crawford offered use of the plane his company rents for special trips. He paid for the rental to take Frank up to West Point.

“When she told Casey the story of Mr. Frank, and how this was something that he had always dreamed of being able to do, but at 96 years old had still never been able to do it, he was just overjoyed to be able to help make that wish possible,” Movement Mortgage spokesperson Adam O’Daniel said.

It truly took a village to set up the trip.

“It’s just amazing how we’re just a bunch of little people from North Carolina who have made this thing happen,” Kristy said, “not knowing what to do or how to even start it.”

Thanks to them, on April 20, Frank walked toward the plane that would whisk him away to West Point, cane in hand. He delivered a clean salute — a lasting sign of the soldier he used to be and the war experience he’ll always carry with him.

He climbed aboard the plane and it pulled away toward the edge of the airstrip, where two fire trucks were stationed. As the plane taxied between them, they both shot an arch of water in the air, a ceremonial water salute crowning the plane that carried the veteran who so many people worked to honor.

The whole time, around his neck, Frank wore his awards, along with the bullet that was once lodged in his shoulder. The medals serve to remind him of all he’s earned. The bullet reminds him of how close he came to dying.

Frank didn’t want to be a soldier. It was thrust upon him when he was 19 years old, and for a long time, he didn’t think he’d survive.

At 96 years old, when he finally got to stand in front of a room of cadets, he let them know he was proud of them. He then told his story from the war, from when he was close to their age.

It would have been easy to give up and die during one of the many moments when he was suffering while fighting in Europe, Frank said. But he didn’t want to die — he wanted to come back home to the life he’d left behind.

His lesson for the cadets was clear:

“Don’t never give up,” he told them. “If you think you can’t make another step, force yourself to make another step. I done that a million times in prison camp. That’s the only reason I’m here.”