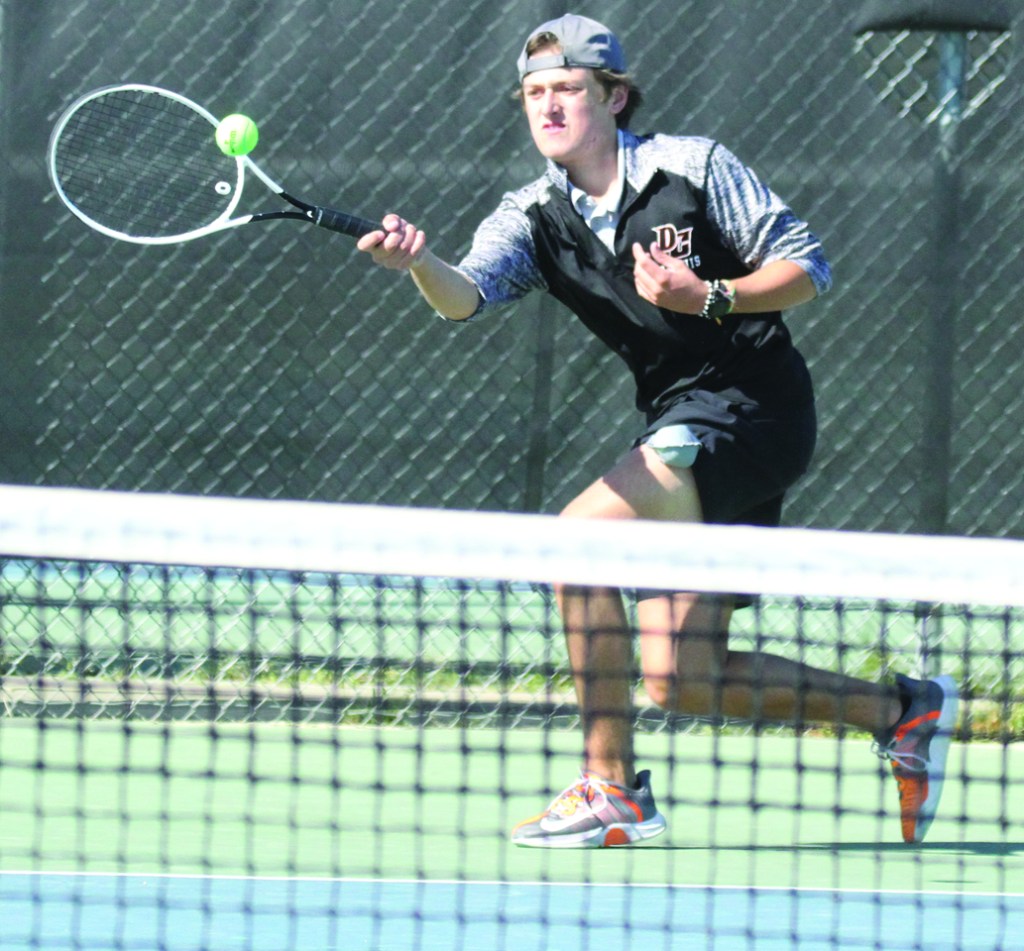 With a share of the Central Piedmont Conference title on the line, Davie’s boys tennis team did not just win against visiting Reagan on April 21. The War Eagles demanded it. They snatched it. They swallowed it.

They patched the damage from March 29, when the Raiders handed Davie a brutally tough 5-4 defeat, with a 6-3 victory that left both teams 9-1 in the CPC.

“Reagan has had our number the past four years,” coach Shane Nixon said. “As much as we’ve been dominate otherwise, you have to tip your hat to coach (Scott) Larson and the Raiders. They just kept beating us. Then last year we narrowly get out of Pfafftown with a 5-4 win, (only to) have the season derailed by the pandemic. When we went to their place earlier this year, it was almost heartbreaking to lose 5-4.

“But I had a feeling about today. I think the extra emotion of Senior Night (for Luke Stillson, Jack Nixon and Cren Rosenbaum) gave us an edge.”

Before the big showdown, Davie had to take a trip to Kernersville on April 19. But East didn’t have nearly enough firepower to play spoiler. Davie’s 25-match winning streak against all CPC teams except Reagan is no accident, and things went predictably enough.

“I told the guys on the way to Kernersville that we needed to take care of business to make Wednesday matter,” Nixon said. “It was a great day for my guys.”

“Burke played against, in my opinion, the second-best player in the CPC (in freshman Corey Brown) and really grinded it out when he had to,” Nixon said. “East is much improved. They have all-CPC level players at one and two. To come out with such a resounding win on the road is huge.”

To understand what the victory meant, you have to understand what had happened in the league’s biggest rivalry. Davie and Reagan have played a series of knock-down, drag-out matches, but the Raiders had won five of the past six. The 5-4 Davie win in 2020 ended Reagan’s 28-match winning streak in the CPC. The March 29 matchup, though, produced familiar heartbreak for the War Eagles, who lost to Reagan for the 11th time in 14 meetings.

B. Rosenbaum was his usual amazing self.

“Burke was dominant in singles and doubles,” Nixon said. “Burke is a really competitive kid, and I think he wanted to make a statement today about the pecking order in the CPC. Boy, did he ever.”

Stillson lost to Kriplani in a third-set tiebreaker on March 29. His redemption against the 2019 CPC singles champion was a masterpiece.

Crenshaw said: “That’s what really made the difference.”

Nixon: “Luke told me there wasn’t going to be a split today. He was right.”

Stillson: “I knew how he played from last time. He was able to figure out my weaknesses the last time I played him, and I’ve been working on those things since then. I feel like I had a better game plan today. Last time I missed a lot of shots coming into the net, and my overhead and serve were not working as well. That’s what I’ve really been working on the last couple of weeks, trying to finish points when he gives me a chance. I was able to do that more today.”

Stillson added: “Seeing my teammates coming off winning as I was playing, that definitely gave me a lot more energy to get it done. Burke was done very quickly. C and Jack finished very quickly. That’s what helped me push through the second set. C is always the best on the sideline cheering on teammates. So when he finishes before me, that tends to help me out a lot. He’s the best cheerleader we have.”

In the earlier meeting with Cook, Crenshaw suffered a wrenching loss (7-6, 6-4). That proved to be an aberration as he flipped the script with authority.

“He didn’t play great and I played a lot better and moved today,” Crenshaw said. “I probably should have beat him the first time. It was about me playing tennis instead of sitting there and watching it happen.”

In a carryover from singles, Davie’s Nos. 1-2 doubles won without breaking a sweat. The score for B. Rosenbaum/Crenshaw  was 8-2. The score for Stillson/Nixon was also 8-2.

“Jack’s gotten better every year and sort of adopted the ‘just win, baby’ mentality,” his coaching father said. “To think you could coach your son on Senior Night and win a CPC title in the process is too good a story. It doesn’t feel real, but it is.”

The tie for first marks Davie’s first championship since 2017.

Stillson: “It was awesome. It’s what we’ve been working for all year. We thought we should have had it last year. For COVID to cut it short last year, it was really rewarding to have this year work out.”

Nixon: “I know the official tally will be ‘co-champs’ and Reagan deserves that after beating us. But just getting to put up a banner in the gym and say we are champs is incredible. The kids deserve all the credit. They have played like champs.”

The War Eagles closed the regular season with a nonconference match against visiting Statesville Christian on April 23. It was a wipeout.

“Not a single guy let the hangover from Wednesday be a problem,” Nixon said.

“This match let me get more match opportunity for some of my other guys,” he said. “Cooper Smith, Jack Williams, Seth Hill, Jackson Clark and Slade Keaton got to play in doubles and all played well.”

Notes: Davie has soared to 11-2 overall with a six-match winning streak. “Those two losses in the middle of the year made us better,” Nixon said. … Assistant coach Terri Eanes was a part of two Davie women’s championships in the North Piedmont Conference in 1976-77. “Terri has been volunteering for four years,” Nixon said. “She joins what has to be a very exclusive fraternity to play and coach on a conference-championship team in the same sport.” … B. Rosenbaum has been utterly brilliant as a sophomore at the No. 1 seed. His record is 11-1. His running score in games is almost hilarious: 136-31. “Burke’s a very well-rounded player,” Stillson said. “He does not do anything wrong and makes no mistakes. We train with the same coach – the whole top six does actually – so I’ve played him plenty of times and I’ve never gotten close. So he’s at a different level. I love playing people who are better than me. He exploits my weaknesses and gives me a lot of things to work on. That’s been one of the biggest things that’s helped me this year.” … Look at the sparkling records in Davie’s singles lineup. Stillson is 10-2 at No. 2; Crenshaw is 10-2 at No. 3; Nixon is 11-1 at No. 4; C. Rosenbaum is 9-3 at No. 5; and Bailey is 8-4 at No. 6.