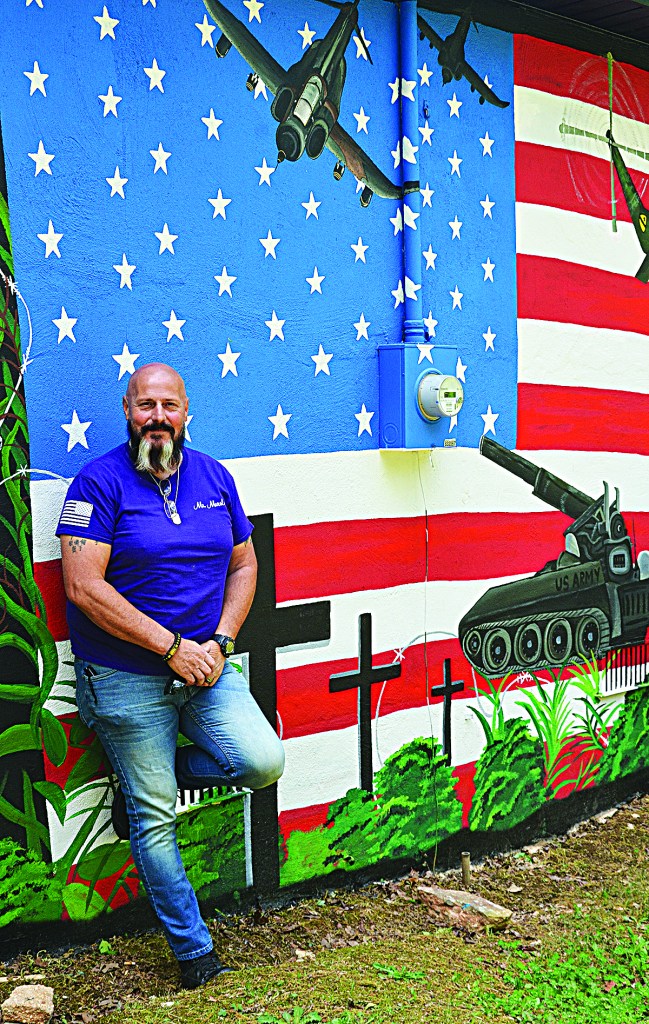 Todd "Mr. Mural" Donahue at the Davie DAV building on US 601 South. - Photo by Robin Snow

Todd Donahue was driving through the Mocksville Bojangles parking lot when he noticed something that made him stop.

Veterans and military vehicles were there, raising money for the Davie chapter of the Disabled Veterans of America. A veteran himself, Donahue stopped to talk.

That chance meeting with Commander Gene Potts led to some colorful and significant changes to the Davie DAV chapter building on US 601 South, Mocksville.

Donahue, a 22-year Army veteran, is also “Mr. Mural,” a name he had trademarked because of his penchant for painting murals. He can’t name the number of murals he has painted, but the local DAV building now has them on both sides.

One side is dedicated to World War II veterans, the other side to veterans of other wars.

“We’re tickled to death,” Potts said. “It looks like a new building now.”

“When he approached me, I wanted to help give back,” Donahue said. “So I donated my time trying to give back to the men and women who served us.”

Donahue has painted murals all over, including several in Taylorsville. He hopes to expand more into Davie County now that he lives here, and is working on a project at the Cartner’s building on US 64 West at Davie Academy Road.

He got his start in art at Disney at a young age, but said he always wanted to work on larger projects. “And I realized that Disney owns all of your ideas.”

“Things don’t come easy for me, I have to work at it, but I’m passionate about what I do,” Donahue said.

His favorite murals are historical, and he says he tries to accurately present that history “I do my homework so things are not misrepresented. I want people to enjoy these. There’s enough ugliness in the world, we need more positive things.

“I paint as I go. I get ideas in my head, and thenI might say, this would look good. Little things make a huge difference in telling a story – especially a historical story.”

Has anyone ever painted an American flag on a heat pump? Probably not, but Donahue did at the DAV building so it would blend in with the mural.