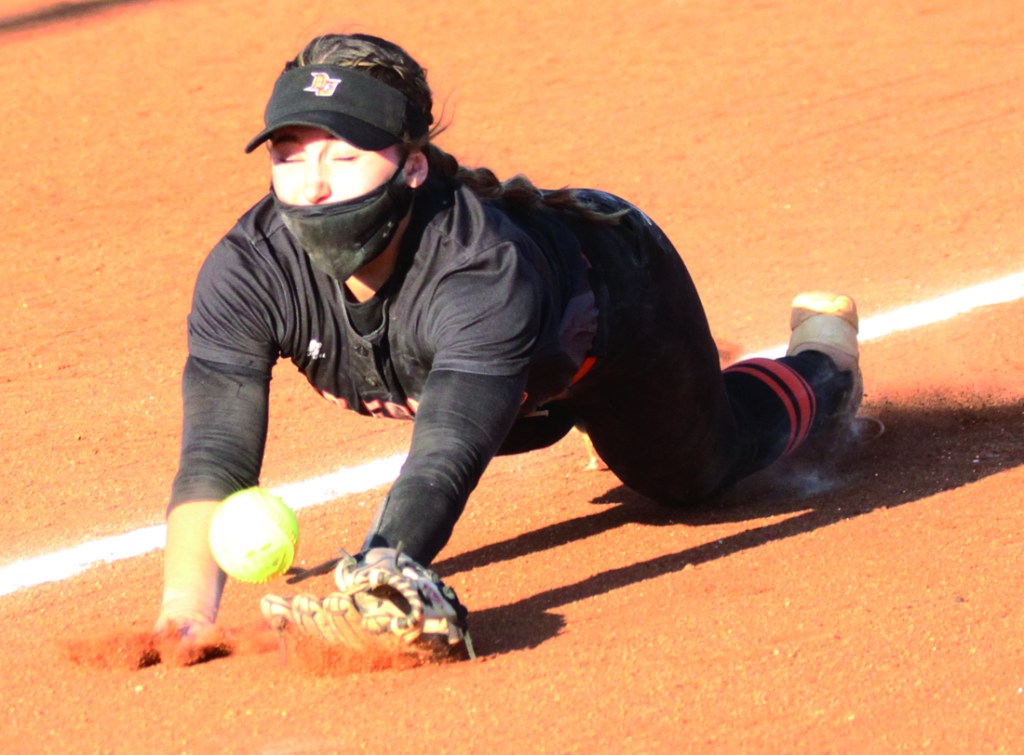 Davie’s softball team was fired up for East Forsyth on April 20. Pitchers Kaylyn Nuckols and Chesney Shook held up their end, Davie got a huge performance from London Dirks and it was a one-run game through four innings.

But East star pitcher Keirston Deal was just too much – again. She cuffed 10 of Davie’s 11 batters and lifted the home team to a 3-1 victory in Kernersville.

East remained perfect at 11-0 overall and 8-0 in the Central Piedmont Conference. It’s a juggernaut, outscoring opponents 92-10 and never allowing more than two runs. Davie (7-4, 4-3) fell for the third time in four games.

Deal, who walked none and struck out 17 while throwing a three-hitter in a 7-0 win over Davie in the first meeting, enhanced her considerable reputation in the rematch. The junior who has committed to South Carolina hurled another 3-hitter. She walked one and fanned 18. In two meetings against Deal, Davie’s bats are 6 for 47 (.127 average). Against everybody else, Davie is hitting .393 (102 for 259). The War Eagles have managed one run in 14 innings against Deal. In the other nine games, they’re averaging  11.5 runs.

In the bottom of the third, East’s No. 9 batter doubled to break up a scoreless game. That should have been the only run against the Nuckols/Shook tandem. With two on and two outs in the fifth, Deal’s grounder was errored, allowing two runs that all but broke Davie’s back at 3-0.

“We held them to five hits,” coach Morgan Wyatt said. “(Nuckols and Shook) really limited the damage, and we were able to get out of some big jams. They both stepped up.”

L. Dirks came in leading Davie in average, runs, hits, doubles, triples, homers, RBIs, walks/hit by pitches and stolen bases. Guess who had Davie’s only three hits against Deal? Yep, L. Dirks. Apparently the junior Charlotte commit isn’t going to be stopped by Deal or anyone else.

Davie’s only other baserunner was Summer Simpson, who led off the fifth with a walk. She eventually stole third but was stranded there.

“London made adjustments (after going 0 for 3 in the first meeting),” Wyatt said. “All the lessons and training that she’s been going to has paid off. She is lighting it up.”

“I was working hard on the rise ball, seeing the spin come out of her hands and adjusting my swing plane to be able to hit the rise ball,” L. Dirks said. “The first two hits were off screwballs and the home run was a curveball. Our game plan was to not hit the rise ball because she couldn’t throw it for a strike.

“She’s an amazing pitcher for sure. It’s a great opportunity to hit off of her. I made up my mind that I was not going to let her make us look like she did before. I was super excited because I was hoping it would get a fire going and we’d be able to come back.”

In the third, Davie pushed across five runs to break it open at 8-1. S. Dirks doubled and L. Dirks singled before Fowler blasted a homer. Later in the inning, with Simpson on base, Leah Grimes went deep.

Davie sent 13 batters to the plate in a nine-run fourth. The big blow was S. Dirks’ three-run homer, her fifth of the season.

Grimes flirted with a second homer, her long drive ricocheting off the outfielder’s head and leaving the park. It went down as an error.

“At the beginning of the season she was hot and coming up clutch in some big situations,” Wyatt said. “She cooled off, but it’s good that she’s starting to get hot again right now. I mean this is when it’s important.”

Notes: Five of Fowler’s eight hits have been homers. She started the season the bench. She’s been on a power-hitting binge ever since she emerged as a pinch hitter. Now she’s batting behind L. Dirks in the heart of the order. “She’s what you hope every player is going to be when you’re not in the starting lineup at the beginning of the season,” Wyatt said. “She was given opportunities to pinch hit, and she stepped up and she’s been clutch.” … L. Dirks has an eight-game hitting streak. Even more impressive, she’s had multiple hits in five straight games. … L. Dirks, S. Dirks and Fowler have combined for 16 homers. Only one other time in program history have three players hit five-plus homers in the same season. In 2017, Ferguson hit 10, Lewis six and Makenzie Smith five. … While Davie improved to 8-4 overall, Reagan tumbled to 1-11. … Davie tied for second in the regular season. The CPC standings: East 8-0, Davie/West Forsyth 5-3, Glenn 2-6 and Reagan 0-8.