Bless Your Spoon: A mess ‘o greens a southern staple 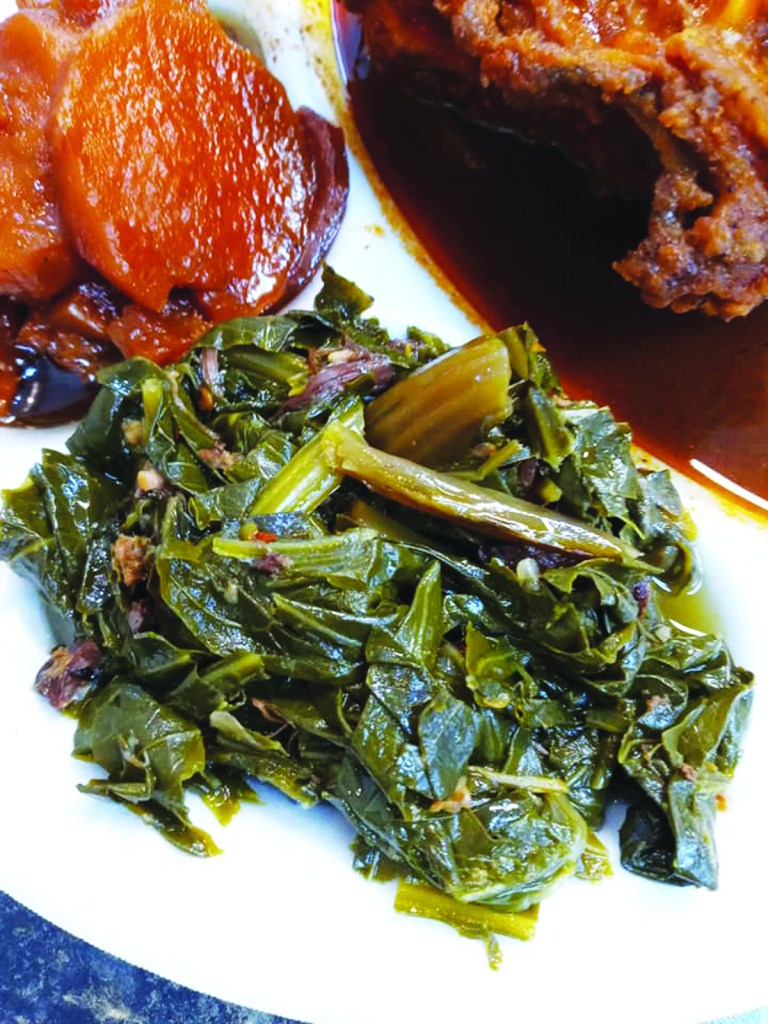 Cook up a fresh, hot mess – of greens, of course

The word “greens” is a southern term referring to collard greens, turnip greens, mustard greens, and kale. I include leafy spinach in the bunch, although not culinary correct. Greens are some of the easiest fresh produce to cook – all benefitting from the same low heat, slow cooking method, a little added fat, and a few dashes of sweet or heat for added flavor.

Cooks dictionary says that a “mess” varies according to how many people are eating. A mess is the amount of greens needed to feed everyone. That shouldn’t be a problem as fresh greens are so available to us now at local farmer’s markets. They’re the hottest southern side goin’.

The ultimate reward of cooking a mess of greens is the liquid known as potlikker – southern slang for pot liquor.  Don’t throw it out after cooking your collards or turnip greens, and use it later as a soup base. All fresh greens are loaded in vitamins A and C and low in calories. Turnip greens are really healthy – and high in vitamin K.

We could have a history lesson on collards – they’ve been eaten for at least 2000 years. No doubt about it, greens are at the top of any southern heritage food list.

Select tender greens and wash them carefully. Young, tender greens cook faster, and if greens are older, they’ll be tougher and require more water. I like to throw a few small new potatoes on top of my greens, and cook ’em up a long time over low heat.

And never far from a bowl of hot greens is Grandma’s iron skillet filled with hot, baked, sweet honey cornbread.  Proper etiquette dictates true southerners use our manners – dunk that bread, sop that liquid – and savor each bite.

Guilty as charged. Don’t blame us.

Very simply, the meat you cook with – ham, bacon, fatback, or streak o’ lean, must be cooked first in the water you will cook the greens in – for at least 30 minutes. Then add 2 Tbsp. of apple cider vinegar and 1 Tbsp. of sugar to the water when you cook the meat. That’s the secret. Salt, pepper, and Tabasco sauce are added, too, in amounts to suit personal tastes. But less is better. It’s almost impossible to save a dish that is too salty or too hot. It’s easier to start over.

Cookbook author and friend, Raleigh Hussung’s recipe for Secret to Greens from her cookbook, Momma Always Said – Pigs is Pigs and Folks is Folks. Available on Amazon.

Clean and cut each bunch of greens. Cut bottoms off stem 5 inches from base. Remove all items that are tough and yellow leaves. Cut bunches of gathered leaves into wide strips. In a deep pot, place greens. Add bacon drippings, the split and cooked ham hock, and ham hock liquid (See recipe for Ham Hocks and liquid) Bring to a boil and then cover and cook for 1 hour. Add sugar. Cook for 1 hour. Salt and pepper to taste.

Take 2 ham hocks and split them in half. In a saucepan, place ham hocks and cover with water. Bring to a boil. Cover and cook at least 2 hours or until meat is tender. Add additional water so that you will have about 6 cups of liquid when finished.

Salt or garlic salt, and pepper to taste

Wash greens. Rinse any excess salt off of salt pork. In a pot of water, place ham hocks and salt pork. Add greens. Cook on medium for 3 hours or until done. Season according to taste.

Clean spinach thoroughly. Trim leeks down to white part. Split down middle and wash well between layers. Julienne by cutting into thin strips. In a deep pot, melt butter. Add leeks and saute 3 minutes or until tender. Add spinach. Sprinkle with salt and toss to combine. Cook while covered for 8 minutes while stirring occasionally. You do not need to add water. Drain and serve spinach while still warm as it will turn black if held for too long in its juice.

Prepare collards by cleaning thoroughly. Remove stems and discard. Cut collards in 1 ½ inch strips. In a deep pot, heat oil. Saute onion and garlic. Add water, meat, and peppers. Simmer for 5 minutes. Add collards and cook on low for 1 ½ hours or until tender.

Wash and clean greens. In a deep pot, add seasoning meat. Add enough water to cover greens and bring water to a boil. When boiling, stir in greens. Cook at a low boil while occasionally stirring for 45 minutes or until greens are tender. Season to taste. Drain and serve with slices of hard-boiled eggs.

In a deep pot, layer bottom of pot with chops. Cover with water and add salt. Bring water to a boil, cover, and reduce to low. Meanwhile, cut collard leaves from stems. Clean the leaves and discard stems. Tear leaves apart.  Place clean leaves in pot with chops. Cover and cook on low for 1 hour or longer until pork meat is falling off the bones. Remove bones and shred the pork. Add pieces of pork to collards. Add sugar and salt as desired. Cook an additional 15 minutes if needed until collards are tender.

Wash spinach and remove stems. Don’t dry, and place spinach at bottom of a deep pot. Sprinkle with salt. Cover and cook on medium heat for 8 minutes while stirring occasionally. You won’t need to add any water. When cooked, drain away any spinach liquid. Melt butter, toss with sautéed spinach and serve.

Mash 1 cup of beans and set aside. In a large pot, heat olive oil. Add onions, garlic and celery. Saute the vegetables for 5 minutes or until onions are translucent. Add mashed beans, broth and spices to the pot. Over medium-high heat bring to a boil. Lower heat and simmer for 5 minutes. Add ham, kale, or spinach, and cook until the greens are wilted, and ham is heated through.