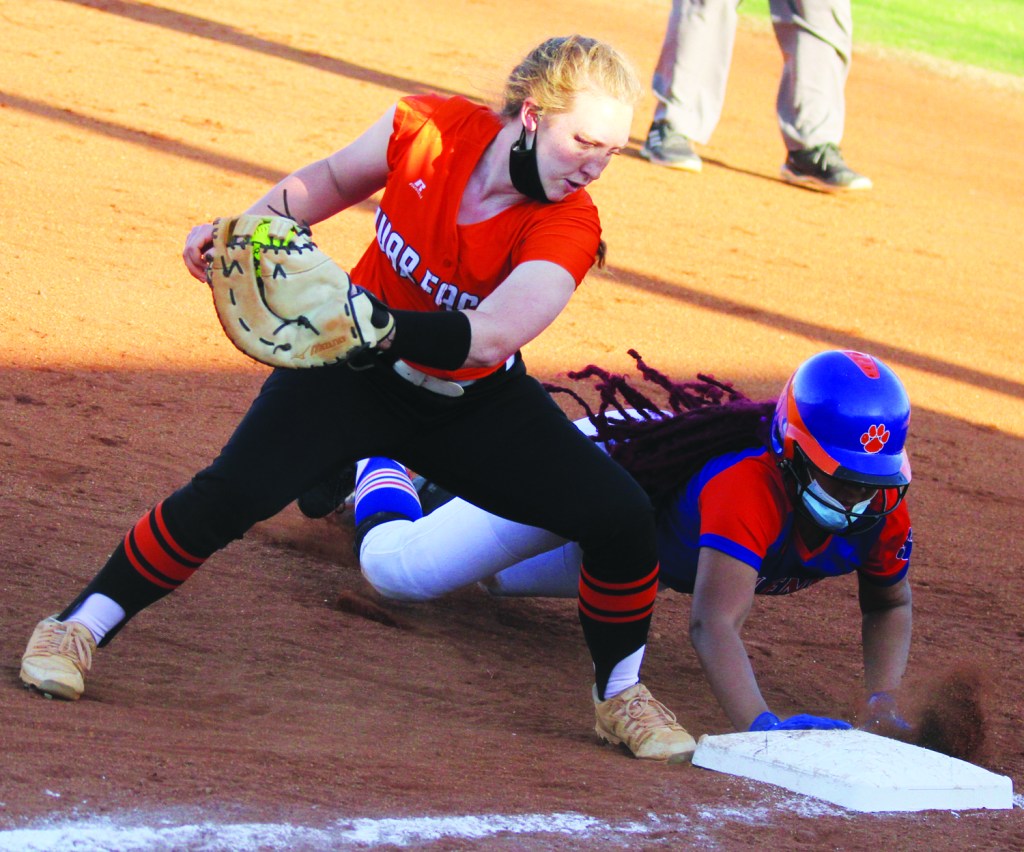 For as much as we think we know about sports, we’re often reminded that nobody knows anything.

• Davie’s softball team punished West Forsyth 7-2 on April 6. Less than a week later, the War Eagles held a 4-0 lead on the Titans, who got off the deck and pulled a stunning reversal, beating Davie 9-8.

• Glenn took East to extra innings, losing 3-2 in eight. Then Davie needed late-inning dramatics from the Dirks sisters to turn back Glenn 10-7.

Whew – what a wild week of action.

Fowler staked Davie to a 3-0 lead in the first by blasting a two-run homer. Earlier in the inning, London Dirks’ double plated her sister, Sydney.

Melanie Gobble’s double pushed Davie’s lead to 4-0 in the second. But the bottom of the second is when West came out of nowhere to take the lead, the Titans scoring six runs on six hits and two errors.

Davie answered right back in the fifth. S. Dirks, L. Dirks, Fowler and Summer Simpson provided hits as Davie forced a tie at 6. West (3-5, 2-3 Central Piedmont Conference) regained a 7-6 lead on a homer by senior Jessica Martin. But in the top of the seventh, Davie surged back in front as Fowler cranked her second homer with L. Dirks aboard. Now it was 8-7 Davie.

“It was a roller coaster,” coach Morgan Wyatt said.

Chesney Shook, who relieved Kaylyn Nuckols in the second after West scored five unearned runs off Davie’s starter, was in position to build on her unbeaten record. Alas, Martin slammed her second homer of the game to tie the score. Then two hits were sandwiched around a hit batsman as West escaped 9-8.

The slugging phenom – Fowler – continued her absolutely ridiculous tear. At this point, she was 6 for 13 (.461) with a team-high four homers and 14 RBIs. She became the first War Eagle in 77 games to hit two homers in the same game (Makenzie Smith hit two against Reynolds on March 30, 2017). In case you’re wondering, the single-game record for homers is three by Wyatt, who turned the trick against North Forsyth in 2009.

“She’s so athletic,” Wyatt said of Fowler. “She’s got size. She’s powerful. She doesn’t even recognize her own strength yet. Those are ridiculous stats. She’s taken advantage of every opportunity and she’s earned a spot in the lineup.”

About three weeks after Davie embarrassed Glenn, the Bobcats looked like an entirely different team in the rematch at Davie on April 15.

The War Eagles had their hands full, but L. Dirks reminded us why she’s committed to Division-I Charlotte and Davie survived.

A two-run double gave Glenn a 2-0 lead in the first. Davie exploded in the third. With Gobble and S. Dirks aboard, L. Dirks smoked a homer. Leah Grimes doubled, Gobble got two hits in the inning and Davie stormed to a 7-2 lead.

But Glenn kept coming. It got four fifth-inning runs on three hits and three errors and chopped Davie’s lead to 7-6, and a two-out single allowed Glenn (2-7, 1-5) to tie it at 7-7 in the sixth.

“We told them that Glenn is going to play us better the next time around,” Wyatt said. “They’ve got a solid pitcher and some decent hitters throughout the lineup. When you let a team hang around, they find some hope and start fighting harder.”

Davie pulled it out in the sixth. Gobble doubled and S. Dirks went deep to put Davie ahead 9-7. The next batter, L. Dirks, left the yard for the second time in the game. That was two homers in a span of three pitches.

It was the third time this year the sisters have homered in the same game.

“It wasn’t ideal how the game went, but we did come out with a win,” Wyatt said. “We were lucky that Sydney and London stepped up when they needed to.”

After Addison Hendrix and Nuckols pitched the first five innings, Shook picked up her fifth win in six decisions. Although all eight of her appearances have come in relief, she has tossed a staff-high 33.2 innings. Her ERA is 2.49. She has 19 strikeouts against six walks.

Offensively, L. Dirks is pretty much as hot as a hitter can be.  Her glittering numbers: .580 average, 18 hits, 21 runs, eight doubles, two triples, five homers, 21 RBIs, nine walks/hit by pitches and six stolen bases. She leads Davie in all nine categories. The five homers are tied for fourth in the program’s single-season record book.

“When you get in that kind of groove, it’s a fun thing to be able to watch and experience with her,” Wyatt said.

“Even though we’re young, we’re very talented offensively,” she said. “Our defense is pretty solid. When our pitching is on, it’s on. For us to be successful, we’ve got to get all three of those things firing at one time.”