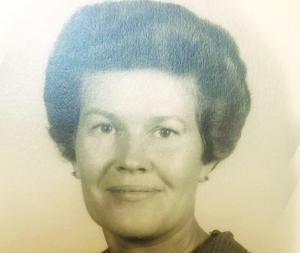 She was born in High Point on June 25, 1921 to the late Charles L. and Katherine Virginia Spencer Betts. She was a longtime resident of Mocksville, and later moved to Raleigh to be near her children and grandchildren.

She grew up in High Point during the depression years and graduated from High Point High School. She married Ramey F. Kemp on Aug. 4, 1939. As the production of machinery for the war effort in Europe increased, she and her sister along with their husbands moved to Baltimore, Md. She teamed with her sister to work at a plant as a “Rosie the Riveter” making the Avenger airplanes. Shortly before the United States declared war on Japan, she returned to High Point. During World War II, while her husband served in the U.S. Army overseas, she remained with her mother, her sister, and her young son in High Point. After the war, she and her husband moved to St. Louis, Mo. where he completed chiropractic school. They then moved to Mocksville to set up his practice. She was his fulltime receptionist as well as a homemaker and loving mother. She enjoyed playing golf and was an active member of First United Methodist Church in Mocksville. After her husband died, she moved to Raleigh to be near her children. She was a member of Millbrook United Methodist Church.

She was also preceded in death by: her sister Sylvia; and her son, Gregg D. Kemp.

A celebration of life service will be held on Saturday, April 24 at 11 a.m. at Rose Cemetery in Mocksville.