Three tennis seniors have been invaluable 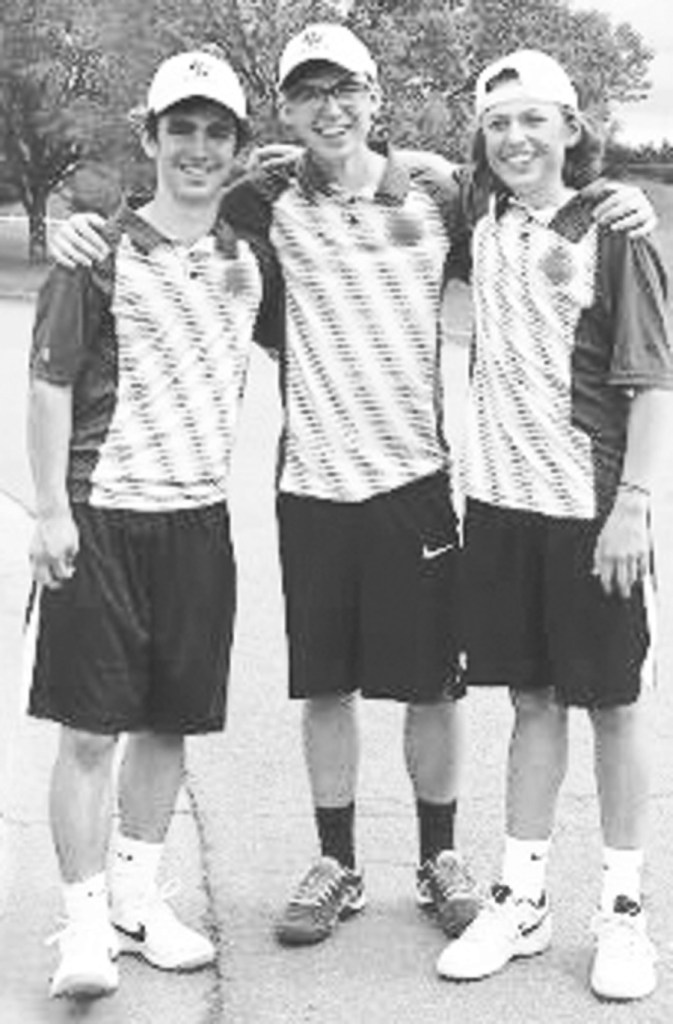 The Davie boys tennis team is not exactly losing everybody after this year, but what it’s losing is going to shake the core of a program that has been steady for a while now.

It is a little odd to say a group of kids who have never, in all four years, had a No. 1 seed among them has been the bedrock of your program. They’ve never won a title. They’ve never gotten past the first round of the state dual team tournament. Now, arguably, COVID robbed them of their best chance at both, when last year’s team was interrupted at the point they were 6-0 and had vanquished their biggest rival (Reagan) in the CPC. It ought also to be said that this year’s team has a legit shot at at least a share of the CPC regular season crown.

But these seniors are more than their records and the things they accomplish on the court. This is a group of kids who you can build a program around. Davie coach Shane Nixon lights up when asked about the impact of these three guys he knows so well.

“I have to be careful. Thinking about these three kids will bring a tear to my eye if I am not careful,” Nixon said. “When I moved to Mocksville 10 years ago, one of the first things we did was get my son Jack, one of the aforementioned seniors, signed up to play recreation league sports. Basketball at the Brock, Davie Little League … Jack just wanted to play.  We were ‘new in town’ and he wanted to be part of a team that would help him meet some friends but also be an outlet for his competitive spirit.”

Little did Nixon know at that time that the other two seniors who have been the base of his program for four years, Cren Rosenbaum and Luke Stillson, would be a part of that from day one.

“The first basketball team Jack played on, Cren was a teammate,” he said. “The two played against another team in that league that had another little guy who would be their toughest competition.  That was Luke. Then that fall, when Jack played at Davie Little League, Luke would be on his team out there.”

Rosenbaum and the younger Nixon were at the same school and became fast friends. Stillson, often their rival in basketball, was at another school, but it is fair to say the three kept up with each other. Through the years, coach Nixon can name at least 4-5 times some combination of the three were on the same team in some sport or another.

Then, as freshmen, they all joined Nixon’s tennis team, and all immediately became part of the top six, where each has stayed for four years. Nixon says that the first year their ability levels were more similar than different.

“Cren has always had the most polished game of the three.  Luke was and is the best athlete. Jack has a court savvy that kept him in the mix.”

But tennis was the place where the three friends were least alike, believe it or not. The three became inseparable, friends who acted like brothers. With a group of a couple more close friends, they became the guys who would help each other through high school. They slept at each other’s houses, became Davie Crazies, gave each other rides, supported each other through good and bad.

Nixon says that he had reservations about coaching his son at the high school level.

“You know that people are going to put that relationship under the microscope,” he said. “I guess I probably did more to make sure that wasn’t the case – at least I tried to. That wasn’t always fair to Jack, but I honestly tried to keep things in perspective. These three guys being so close, actually at points made it both easier and harder. Watching them have to play each other in challenge matches for seeds, you could see the guy who won wasn’t thrilled about that meaning his buddy lost. There is only three of them, so figuring out how to put doubles together has been challenging as well. Of course, with these three, the good outweighs the bad.  Watching them be there for each other from practice to bus rides, in the highest wins and the lowest loses, it has been really great.”

And the three seniors seem to echo their coach. When asked about their favorite part of the last four years in tennis, each included “playing with my best friends” in their answer.  The coach’s son put it this way: “Playing with these guys,” as he points to Rosenbaum and Stillson, “has helped make sense of a world that has been inconsistent during our high school years.”  Rosenbaum added that “closing out my high school days on this team with my two buds has been amazing.”  According to Stillson, the three aren’t done yet. “All we want now is to win a CPC title . . .  together.”

The three seem like if there is any way that can happen, just the fact that they are together might make it happen. Their coach agrees.  “I don’t think we get to the level we are in our program, without Jack, Cren and Luke. Well actually, I know we don’t.  And for this year’s team, they are our captains, our unquestioned leaders, and they provide more than half our chances to win.”

The War Eagles stand in second place in the CPC, and their lone CPC loss was a 5-4 defeat to first-place Reagan. The Raiders come to Davie April 21. Nixon says his three seniors will be ready, and they’ll help get his entire team ready.

“In four years, I’ve literally watched these guys grow up,” he said. “The level of tennis has gotten so much better. I’ve said for two years now that Luke has improved more from his freshman year to his senior than any kid I’ve ever coached. You can argue he is the second- or third-best player in the CPC now. Cren has given up so much individually for team success. He has had some of the most memorable moments. He has beaten some really good players. Jack has had to be the coach’s son, and he has handled that far better than his dad. And Jack just keeps winning. But each does so much more than tennis. Among them, the number of awards and positions held is way too numerous to list. They are great students, leaders of their peers, just fantastic young men. But one of the things that stands out to me is how they have stayed true to each other.”

Their impact on the tennis program will not fade with their graduation. “Most of the kids who will play for our program for the next few years will all have played with Jack, Cren or Luke at some point. They also leave a legacy of leadership that guys on the team now will pick up on. I really do get emotional thinking about them not being here next year. Obviously, Jack graduating is part of that, but all three of these guys . . . I don’t want to think about it.”

Nixon adds: “Coaching your own is difficult; it is hard to draw that line. But I can honestly say that coaching these three is like coaching three sons instead of one.”