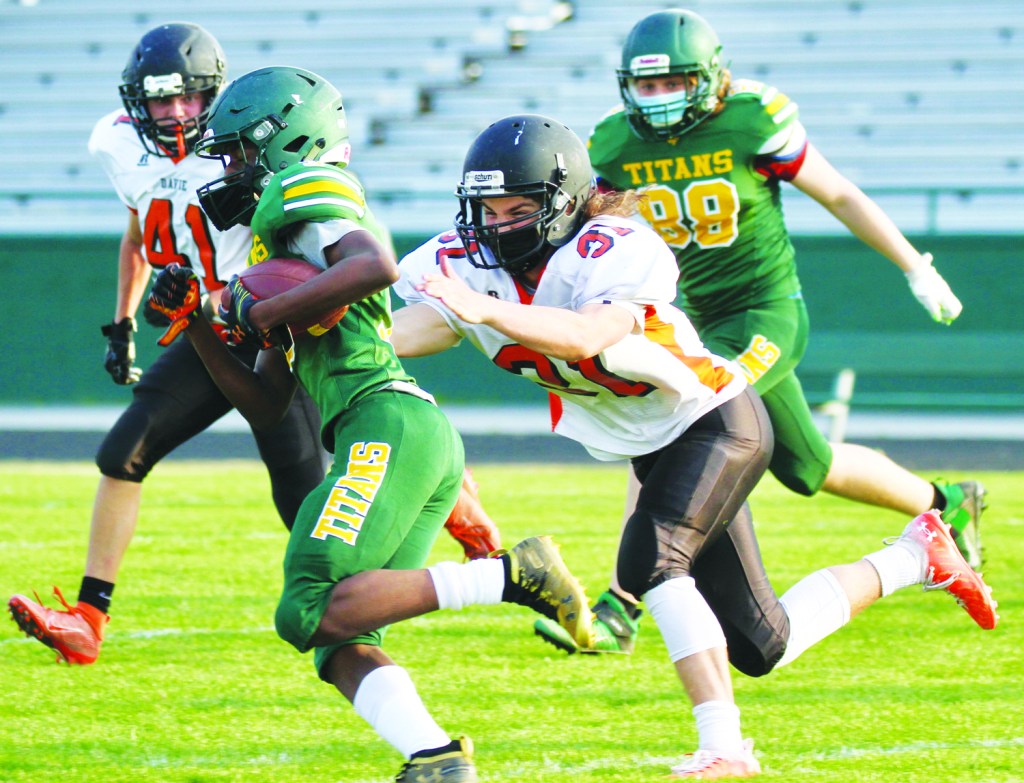 In the final game of the season for Davie’s JV football team, West Forsyth was just one more obstacle to thrust aside on the road to perfection.

The War Eagles manhandled West 63-15 in Clemmons on April 7 to complete a 5-0 journey, including 4-0 in the Central Piedmont Conference. (They were supposed to play seven games, but Ragsdale did not field a team and the Glenn game was rained out.)

“I’ve been preaching to this team that we’re getting ready to win multiple conference championships if we do the right things – stay together and work hard,” coach Perry Long said. “I told them if we win this game we would get some undefeated T-shirts. Man, they were ready to bite people’s heads off. I would love to play some more with these guys. They enjoy playing football.”

The War Eagles came out throwing haymakers. Markel Summers took the opening kickoff to the house, it was 21-0 after the first quarter and 42-15 at halftime.

“Markel made two people miss around the 20 and he hit the sideline,” Long said. “When he got going down the sideline, they couldn’t catch him.”

Quarterback Ty Miller’s versatility makes him a dangerous weapon, and he showcased his running/passing skills one more time. He carried the ball 17 times for 86 yards and (gulp) six touchdowns. Through the air, he went 7 of 10 for 177 yards. On the ground, Summers was next with 15 carries for 78 yards, including a rushing score to go with his kickoff return.

But, as you can tell by Davie’s record and the average score across five games (46-10), Davie has a vast array of talent. Carter Helton ran for 65 yards on 14 carries and Mason Caudle (four carries for 42 yards) snapped off a 37-yard TD.

The second- and third-string running backs (Helton and Caudle) got the ball on 12 of 23 second-half rushing attempts, and Miller only attempted two passes in the second half, with both going for completions that totaled 37 yards.

“We weren’t trying to score (in the fourth quarter),” Long said. “They couldn’t stop the run. We were trying to run the clock out.”

Before the game got out of hand, Nail got an interception in the end zone to thwart a West scoring opportunity.

“They had a big outside receiver – not a great matchup for us – and West had just completed a 40-yarder to him,” defensive coordinator Blaine Nicholson said. “A couple plays later, they went right back to him, and Reed pressed him to the sideline and high-pointed the ball. It was a big swing. We were only up a score or two. Reed had a couple really good tackles. They like to run a lot of jet sweeps, so the corner’s got to make plays when that happens. He did a good job.”

On one play, Testa forced and recovered a fumble. “He was some kind of pumped,” Long said. Nicholson added: “Hunter had a really good game.”

“They had a stud running back, and Eli did a good job of coming up and making some one-on-one tackles with that guy,” he said. “Logan did what he’s been doing the whole year. He’s pretty much the leader of our (secondary).”

Notes: The offensive line helped Davie average 5.4 yards per run and Miller average 25.2 yards per completion. Hunter Dyson and Gavin Taylor shared the duties at left tackle. Chad Russell played left guard, Charlie Frye center, Brysen Godbey right guard and Evan Copeland right tackle. … Kicker Palmer Williams had a busy day, going 9 for 9 on extra points with Frye snapping and Froelich holding. He tried a 50-yard field goal and nearly made it. “It was right down the middle,” Long said. “He probably left it four yards short.” Nicholson added: “For a JV guy to attempt a 50-yarder is pretty much unheard-of.”