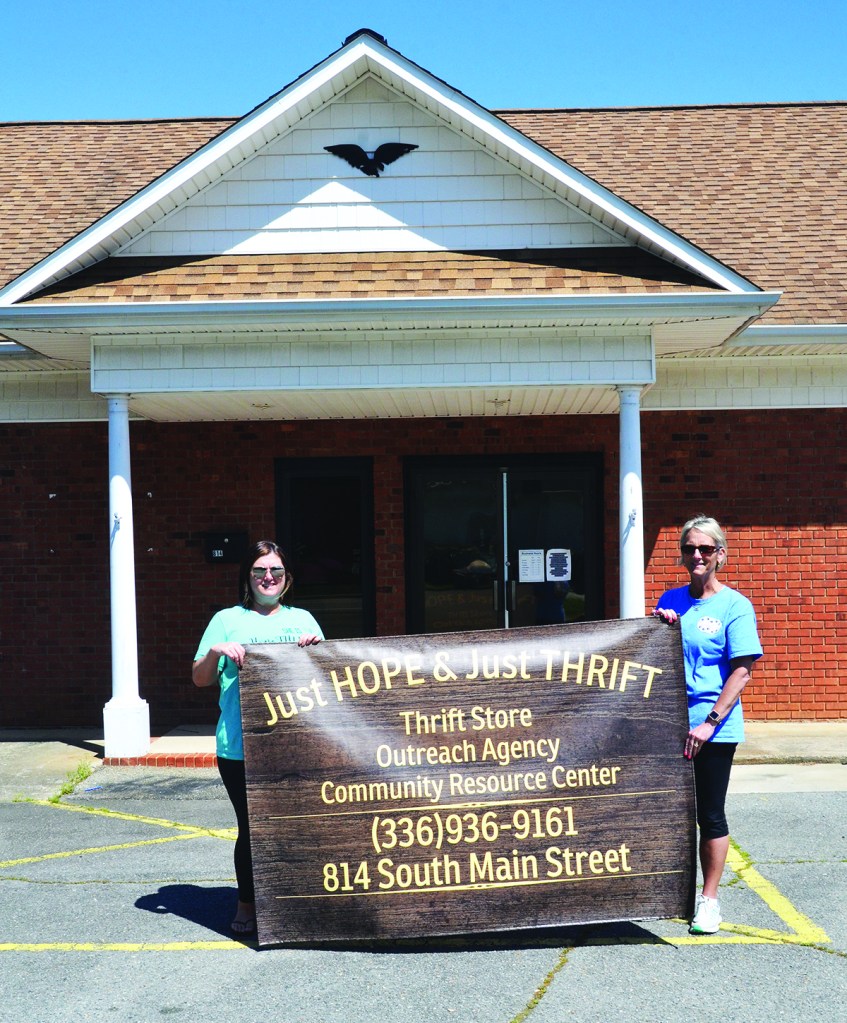 Krystal Dumas and Robin Howard in front of the new Just Hope location on South Main Street in Mocksville. - Photo by Robin Snow

Krystal Dumas looks around the 9,000 square-foot new home of Just Hope, and she can’t believe her eyes.

The charity aimed at helping homeless people has come a long way since she started cutting coupons at her home in 2010.

Her idea was simple: use her couponing skills to get food and personal hygiene items for people struggling to find a permanent place to live.

Then she applied for non-profit status in 2013, and people couldn’t believe she didn’t have a budget. She said she didn’t need one, because she accepted no donations at the time.

She continued to work from her home, then at a church, then to the basement of a building in Downtown Mocksville. She was ecstatic when it moved to the site on Wilkesboro Street in front of Rescue House church.

But that site, too, quickly became too small.

Now, A Full Measure is moving into the Wilkesboro Street site, and Just Hope has moved to South Main Street, in the building formerly occupied by Upscale Consignment and before that, Mocksville Builders Supply.

A ribbon cutting ceremony will be held Friday, and a grand opening will be on Saturday. There will be a bounce house for children, hotdogs, face painting, a DJ, and a sale on items in the thrift store.

Dumas gets excited when talking about the possibilities.

Just Hope has grown to include three full-time, and two part-time  employees. It operates a thrift store there, and still works to help those who are homeless.

The thrift store is open for donations and shopping from 9 a.m.-5 p.m. Tuesday-Saturday. Anyone can shop at the store; those who can’t afford to pay don’t have to.

Just Hope has a lease-to-own option on the new building, which she says isn’t only much bigger, but is much safer. It comes with security cameras inside and out.

It allows for storage of seasonal items, and more floor space for sales and services to the homeless. It will also allow for offices for key employees and training to help people get jobs.

Dumas still makes regular rounds to local hotels and campsites, taking food and personal hygiene items to those families. It doesn’t operate a food pantry any longer, because those are available at locations throughout the county, she said.

The new site will include a family room, where families can come to spend a few hours as a family watching television, playing games or just interacting with each other. That can be difficult in a small hotel room or campsite.

“Families staying at a hotel, they really don’t have a place for family time,” she said. “It’s important for me to repon the family day center.”

It will also offer laundry services to those without a home. She said it is surprising the number of people – especially younger people – who do not know how to wash their own laundry.

Teaching life skills and employment skills are another outreach. She hopes to use the new space to teach CNA and other employable skills on a fast track. Transportation can be a problem for those wishing to take these classes in other counties.

Just Hope helps with other job skills, including providing interview and work clothes.

“I’m excited to be here because I never thought by running this out of my house … feeding and getting people personal hygiene items would turn into this. I’ve been a nervous wreck but I really think this was meant to be the way everything has turned out,” Dumas said.

The way to go: First Ignite Davie students on…