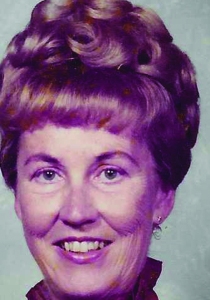 She was born Nov. 6, 1932 to the Rev. Joe Cephus Gentry and Dora White Gentry while her father was appointed to the Bakersville, circuit. She grew up as a Methodist minister’s daughter with a new home every two years. She graduated from Sandy Ridge High School and worked at Western-Electric in Winston-Salem where she met and married Grady L. McClamrock Sr. She later married Knowles Kennedy of Sylva, who preceded her in death along with her parents; her sisters, Lois Anglin, Rebecca Carter, and Pauline Ernest; and brothers, Hampton W. Gentry and John Wesley Gentry.

She was an energetic, hardworking and independent minded woman who always knew where she was going and was always going somewhere. She spent a large portion of her life and energy taking care of her sister, parents, aunt, grandchild, husband and friends during their time of need. She played outdoors at every opportunity and always had a vegetable or flower garden for friends and visitors to share. She enjoyed finding and collecting antiques, especially clocks. She turned trash into treasures by “remodeling” some Goodwill item into a prized possession by her detailed painting and artwork which she often gave to a friend or family member. As an adult, she lived in Mocksville, Winston-Salem, Lewisville, Sylva, and Raleigh and returned to Mocksville later in life. She made clothes and suits for her sons. She once made matching jackets for all of Grady Jr.’s band members. She was a charter member of the Mocksville Women’s Club, member of the Faithful Workers Sunday School class and First United Methodist Church of Mocksville. She was proud of her children and grandchildren and would keep everyone updated of their accomplishments. She made friends everywhere and appreciated the care, prayers and concerns of her new church family and friends in Mocksville. Especially precious was her constant companion and caretaker Ron Cotterman, who she said “was sent to her from heaven”. Before her death, she had a vision of her parents and Savior in heaven and she was ready to join them.

At her request, no service will be held.