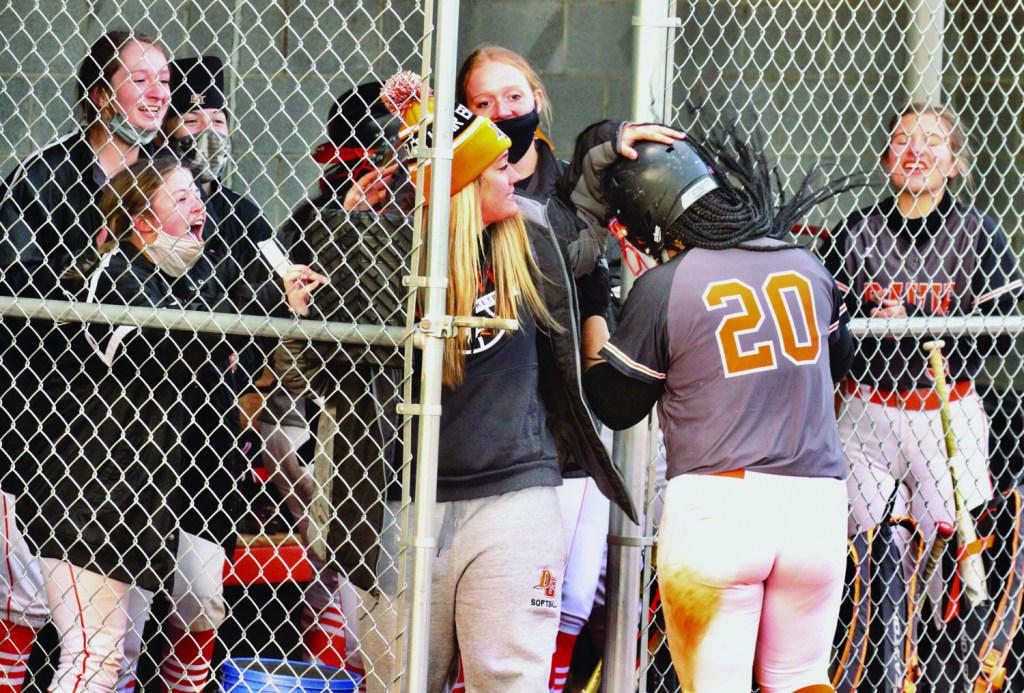 When Sydney Dirks of Davie’s softball team drove in six runs in a season-opening 15-12 win over Forbush, it marked the most RBIs in a game by a War Eagle since 2017, or 76 games. Her older sister, London Dirks, matched the feat during a 19-1 rout of Glenn.

Get ready now for the most remarkable stat: Audrea Fowler had six RBIs in one inning to power Davie to a 12-5 comeback win over Hickory Ridge.

Davie went 2-1 last week to bump its overall record to 5-1. That’s the best start since the 2017 team opened with the same record.

But their offense was less inspiring on March 29 against a marvelous pitcher. Lefty Keirston Deal and East shattered Davie’s unbeaten record.

Deal, a junior who has committed to South Carolina, pitched a three-hitter with no walks and 17 strikeouts. As if that wasn’t enough, she went 2 for 3 with a double as East improved to 4-0 overall and 2-0 in the CPC.

East jumped to a 3-0 lead in the first despite only getting one hit. Bailey Snow led off the Davie first with a single, but Deal retired the next five before Melanie Gobble’s two-out double in the second. That was followed by a strikeout looking. Karley Queen singled in the sixth, but the next four batters went down on strikes as Davie (3-1, 1-1 CPC) lost to East for the fourth straight meeting.

“You’re not going to be committed to an SEC school as a junior and not be really good,” coach Morgan Wyatt said. “And we made her look even better. We swung at some bad pitches and didn’t stick to our game plan. But I’m not taking anything away from her. She’s a very solid pitcher.”

One day later, the War Eagles got back on track in a big way, mercy-ruling the winless Raiders (0-3, 0-2 CPC) in Pfafftown.

For the second time in eight days, the Dirks sisters went deep in the same game. Sydney went 2 for 3 with a home run and three RBIs. London went 3 for 4 with a double, homer and two RBIs.

“I don’t know if they’re trying to one-up the other or if they feed off each other,” Wyatt said. “Whatever it is, I like how it’s going.”

“Bailey has pretty much been a constant,” Wyatt said. “She does well at the top of the lineup. She helps set the tone for the game.

“Melanie is a sophomore, but I don’t know if she has any fear whatsoever. She bulldogs her way through anything. She puts a good swing on the ball.”

Notes: All three of Reagan’s runs were unearned against Kaylyn Nuckols and Addison Hendrix, who shared the pitching duties and combined for a five-hitter. … At this point, the No. 3 average belonged to Summer Simpson at .411 (7-17).

You saw the darnedest thing at Davie on April 1. The War Eagles trailed 5-2 going into the bottom of the sixth. They woke up and rushed past the Ragin’ Bulls by putting up a 10-spot. And two freshmen (Fowler and Ashley Bledsoe) emerged from the shadows and blasted homers.

“We came alive at the right time,” Wyatt said after Davie dropped the Bulls to 4-2 overall. “They were ranked fifth in 4-A. It was a big nonconference game.”

Through five innings, Hickory Ridge sophomore Anna Dew had held Davie to two runs on two hits. But everything changed in the sixth, when Fowler pulled off her magic.

After Simpson and Leah Grimes drew walks, Fowler entered as a pinch-hitter and promptly knocked both in with a double. Taylor Hilliard singled, Bledsoe laid down a sac bunt, Snow walked and Queen laced a two-run single. After the first out, L. Dirks doubled, Simpson walked in her second at-bat of the inning and Grimes walked to force in a run.

That brought up Fowler with the bases full. She unloaded a grand slam, capping her six-RBI inning and Davie’s five-hit, 10-run explosion.

The wildest part: Fowler and Bledsoe entered the day 0 for 5 and 0 for 3 on the season, respectively. Bledsoe’s first varsity hit was a two-run homer in the second. Four innings later, Fowler came off the bench and struck like a cobra.

“What was impressive is it wasn’t the same ones doing all the offensive work,” Wyatt said. “Defensively behind the plate, Ashley is very solid. She has a good arm and works hard back there. We’ve worked with her in the cage on her hitting and tonight it paid off. When she was coming around the bases, there wasn’t a bigger smile on the planet. I was pumped for her.

“We pinch-hit Audrea and she came up clutch with a double and we kept steamrolling from there. (Her grand slam) put a nail in the coffin. You can see the sheer power that she has. Her hands are ridiculously fast. We’re just trying to fine-tune a few things. We’ve put her in situations where a big hit was needed and she had come up barely short a few times. Her confidence has gotten to where it needs to be and tonight she really stepped up.”

Chesney Shook played a critical role in the outcome. Entering the circle in relief in the second, she pitched 5.1 scoreless innings with six Ks. In four relief appearances, she is 3-0 with a 1.44 ERA. Despite not making a start yet, she has tossed a staff-high 19.1 innings.

“Goodness gracious, she stepped up and did exactly what we needed her to do,” Wyatt said. “She hasn’t gotten a start yet, but the way she’s been coming in, I have the utmost confidence that I can put her in almost any situation and she’s going to bail us out. It was big-time not to give up any runs.”

Notes: The starter, Hendrix, gave up five runs in 1.2 innings, but only one was earned. … Hilliard matched Fowler with two hits as the 7-8-9 batters (Fowler, Hilliard and Bledsoe) accounted for five of Davie’s seven hits.