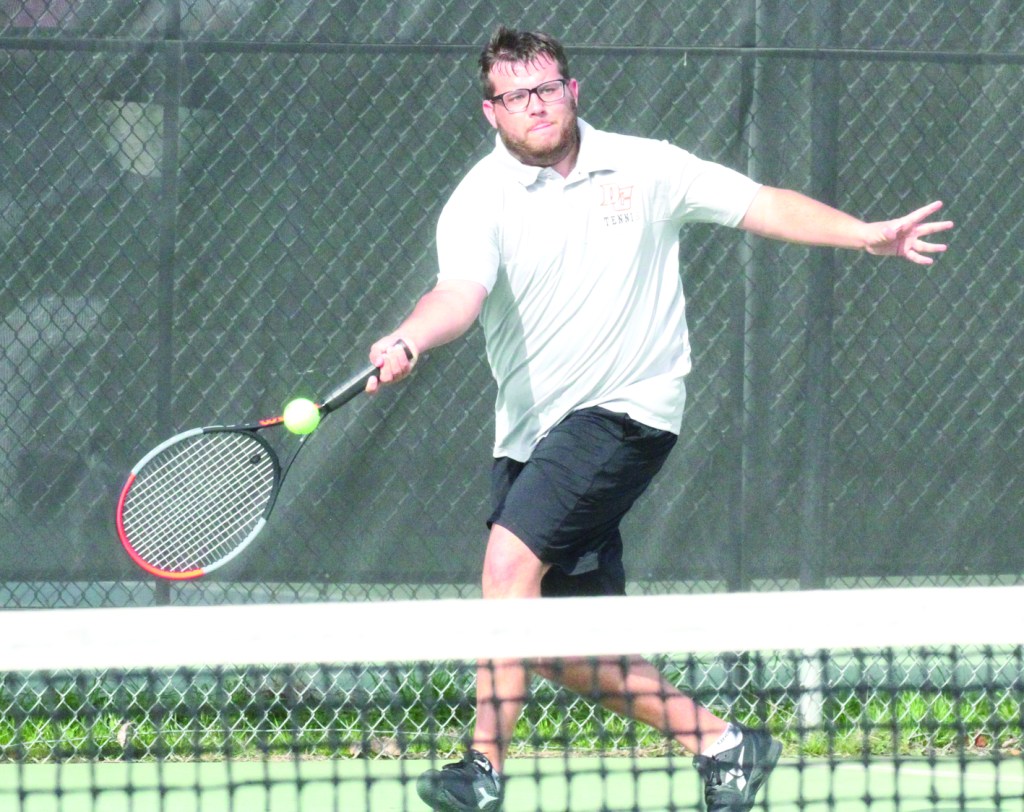 Davie’s boys tennis team has played five matches. The running score is 44-1. It has an 11-match winning streak overall and an eight-match streak against Central Piedmont Conference competition.

That tells you everything you need to know about these relentless War Eagles.

They did exactly what they should do at Glenn on March 22. They breezed 9-0 against an opponent that hasn’t touched the win column since 2017.

“We took 12 guys to Glenn and 12 guys had wins,” coach Shane Nixon said. “I’m very excited for a kid like Slade Keaton, a freshman who gets to feel the joy of winning early.”

The competition was much stiffer in a nonconference match at Mt. Airy on March 23, but Davie still won overwhelmingly.

“When I was making this COVID-effected schedule, we wanted to play a couple of really good teams and Mt. Airy certainly qualifies,” Nixon said. “I expect them to win their conference. While the score was one-sided, they really are a good team. We are just playing at a really high level.”

“Kids like Jackson Clark, Owen Fender, Seth Hill and Jack Williams have all been part of our program and know how to do what we do,” Nixon said. “Slade has stepped right in as a freshman and earned his spot. The future is bright, even as the present is looking good.”

The home match against East Forsyth on March 24 was more of the same.

“Every single match was much closer than the score showed,” Nixon said. “East is a tough out now. All that makes what my guys are doing even more impressive.”

The best part was Stillson’s tiebreaker win at No. 2 singles.

“Luke played with so much heart and guts,” he said. “This may not have been Luke’s best tennis, though he did play well, but it has to have been his most satisfying. East’s No. 2 has been their one for two years. Luke never gave up; he never does. We work in practice on playing tired, just so we can be ready for (tiebreakers). Luke can sure tell you it pays off.”

“Burke makes things look so easy,” Nixon said. “The only reason they look that way is because he works so hard. East has a new No. 1 and he hits the ball a ton. Burke just did his thing. He is so good. The tennis is just exceptional, but his competitiveness deserves some ink. He plays every point so hard. He hates losing. He is confident but takes nothing for granted.

“C is a shotmaker’s shotmaker. He hit a return on match point in doubles (against Mt. Airy) that you had to see to believe.

“No one has done as much sacrificing as Cren for our team effort. He is such a good young man and a fine tennis player.

“Luke is a phenomenal athlete and plays with a grit that you can’t teach or coach.

“Jack just wins. It seems not to matter where we put him or who he plays with. All three seniors (C. Rosenbaum, Stillson and Nixon) are really good players, but even better young men.”