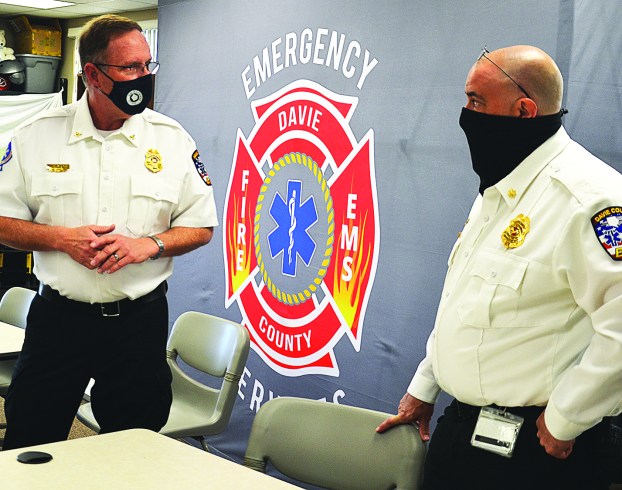 Brian Byrd is thankful to be in Davie County.

Davie County – where the EMS coordinator can get his hands on PPEs (personal protective equipment) just across town.

Davie County – where if he needs more face masks, a local company that makes shades for RVs switches to making masks.

Davie County – where if he needs more hand sanitizer, a local paint company switches gears and brings in gallons of the stuff.

Davie County – where governmental departments put aside their turf wars and differences when the chips are down.

Davie County – where even the residents, knowing of the extra strain on EMTs and other emergency workers – routinely bring in a pan of hot brownies.

Davie County – where upon noticing inadequate tents for mass drive-thru vaccinations – a local company pretty much shut down by the pandemic not only donated theirs, but installed them as well.

Davie County – where upon noticing front-line vaccination workers plodding through extreme cold – a local company sent a motor home for the site.

And it’s made people like Byrd proud. “There are people everywhere helping out where they can,” he said. “People have no idea what goes on in the background to make that one vaccination event work.”

Medical professionals such as EMTs are trained for a pandemic – but the world isn’t.

Byrd remembers getting updates early on during the pandemic. He was told to expect 50 percent of his staff to be out at one time. That didn’t happen, but last November-December, the number did reach 30 percent. A lot of people have ended up working a lot of overtime.

“We all pulled together,” said Major Joseph Ashburn. “It’s been a team effort.”

“Morale is good,” Byrd said, “we’re just tired. There have been a lot of people doing a lot of different jobs.”

As with most things, when the pandemic is over, there will be changes that will last.

For instance, all new trucks will come with intercoms and partitions between the driver and the back. The older ambulances are open, giving the driver and EMT working on a patient the chance to talk. Temporary barriers prevented that sometimes necessary dialogue, Byrd said.

Every time 911 is called for a medical emergency now, the telecommunicator has a list of questions to decide if the call is Code Gold, or COVID positive. Those Code Gold calls take a bit longer.

EMTs put on full body protection, including a face masking system that includes air flow. The truck is “dead headed,” meaning after taking the patient is dropped off at the hospital, it is out of service and sent back to headquarters. There, the doors are opened for it to “air out,” then it is thoroughly cleaned, including with a disinfecting fogger.

“We’re fortunate enough to have extra trucks, so we can do that extra cleaning,” Byrd said. “But we don’t have any ambulances sitting around with noboby in them, and the county has never been short staffed.”

First responders also answer these calls, and had to learn their own protocols.

Byrd is worried about the future for the department, because the pandemic has cut the number of young people training to become an EMT.

The COVID call center is being housed at the EMS station, another cross agency effort to help battle the pandemic. If you can to learn information in Davie County, you get a real person. “It’s meant a lot to the elderly, they really appreciate that,” Byrd said.

Even the library got in on the agency to agency cooperation, printing materials when needed.

“Everybody’s just stepping up,” Ashburn said. “We’ve had to learn how to manage with COVID.”

By Jim Buice Enterprise Record BERMUDA RUN – What started as a dream years ago has become even larger than... read more