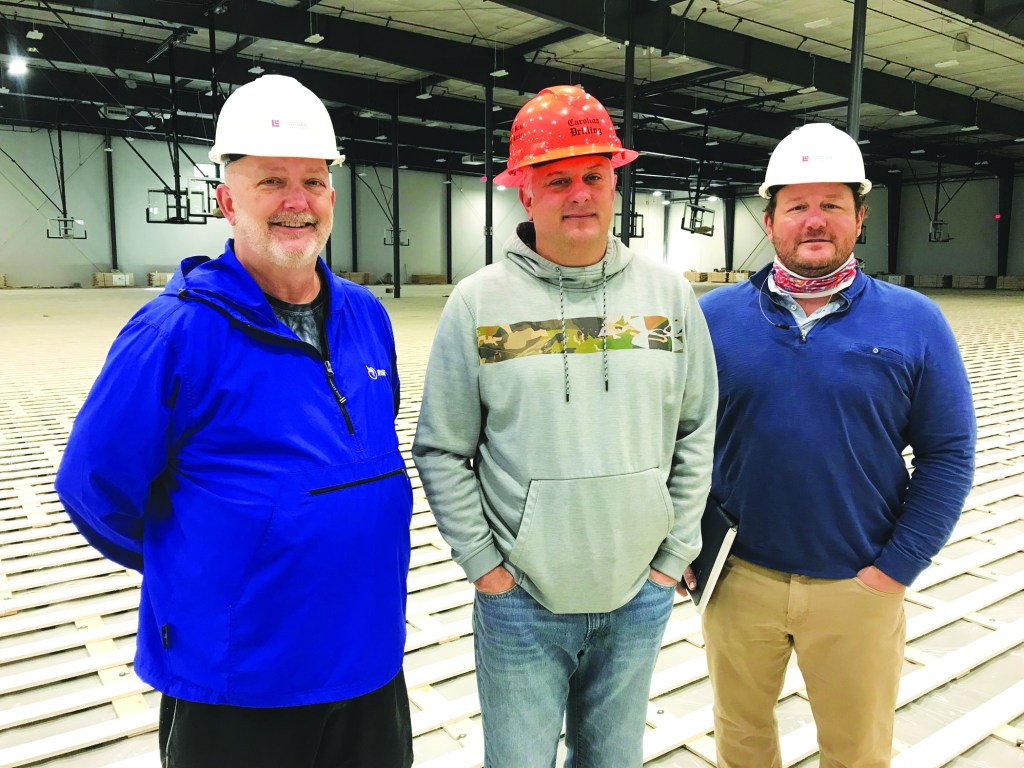 BERMUDA RUN – What started as a dream years ago has become even larger than Adam Barber could have ever imagined.

As RISE Indoor, a 123,000-square-foot, multi-sports complex with a price tag close to $14 million, enters the final stages of construction on the hill above Truist Sports Park, Barber reflected on he and his wife Jessica’s vision of “opening up a performance facility and a gym of our own.”

Their passion for training ultimately led to creating Torque Performance and Fitness on US 158 in Bermuda Run. Then along came an opportunity to purchase 22 acres between the sports park, which is home to NC Fusion, and Kinderton Village, and taking it to the next level.

And, wow, this is some facility. In fact, it’s considered to be one of the largest of its kind in the eastern United States.

There will be eight full-size basketball courts that can convert to 12 volleyball courts, four indoor soccer fields, the Torque Performance Training Center, a fitness and cardio facility, a full-service concession stand – with healthy options – and seven community meeting rooms. Also, plans are in the works to include on-site orthopedics/physical therapy and sports medicine. 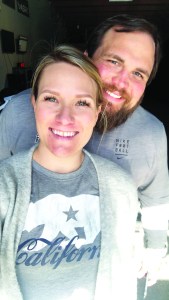 “With anything, it’s crazy how things change into a different dynamic,” Adam Barber said. “I think first there’s the vision – hey let’s do this and this and this. We’ll build it, and they’ll come. To be very transparent, the very first thing we were going to build was a 40,000-square-foot facility, but it obviously morphed into more than three times that size.”

“We want this facility to realistically be a hotbed for athletes to come and get better and for tournaments to be held at the highest caliber. And if you’re a good athlete in the area, you play a sport and you’re needing to get better, I don’t want there to be anything that we can’t accommodate from a strength, conditioning or facilities standpoint.”

Adam Barber’s interest in training goes back to his days of playing football at Davie High and then when he went to college at East Carolina and was working with his younger brothers, Jared and Jacob.

“My dream actually started a long time ago when my brothers were competing in a multitude of sports – football, wrestling and baseball,” Barber said. “For certain sports, we’d go all across the country – to random high schools, colleges or convention centers. We had to go to all these different venues, and one thing I noticed going to these events was they would never have the proper nutrition for all these athletes to eat.”

Although Adam didn’t play at the collegiate level, Jared was a four-year starter on the football team and team captain at West Virginia who went on to sign a rookie contract with the NFL’s Carolina Panthers, and Jacob was a standout baseball player at Winston-Salem State.

“I didn’t play college football, but I trained myself and was training them,” said Barber, who became a teacher after graduating from college. He spent several years working in exceptional children classrooms with developmentally disabled or mentally handicapped students while still training on the side.

“What I wanted to do was own a private facility, but at that point nobody was doing that,” Barber said. “You either worked for Gold’s Gym or somewhere like that, a YMCA or a recreation department.”

His wife Jessica, who also went to East Carolina and received an exercise science degree, came home after graduation and was doing personal training and working for a recreation department. Meanwhile, Adam got his first break when he was asked to work for a new private facility in Bermuda Run in 2011.

“It was truly an eye-opening experience to work with a multitude of athletes on different levels from young kids to current college athletes in school,” he said. “My brothers were still on that level.”

Barber said that it was a great learning experience and paved the way for him to start out training kids in the bottom of Gym 365 in Mocksville. Jessica was back in school again to be a certified registered nursing anesthetist, and the couple was at a crossroads after starting a family.

“We were working too much,” Adam said. “My wife said we need to do something. We were losing family time and came to the conclusion that we either stop training and focus on going to work and coming home, or live out our dream and open up our own facility. So that’s what we did.”

The Barbers opened Torque, a 1,825-square-foot facility, in July 2014 but outgrew it within a year and eventually moved to the present location on US 158. It will relocate into RISE “with the same philosophies but a bigger footprint.”

When what was then called Twin City Soccer decided to forego its original plans to purchase the land just to the west of its complex and add more outdoor fields, Kinderton residents raised concerns over the lights and noise, and the next opportunity presented itself to the Barbers.

As the dream started to develop, they met with Jason Tutterow, a longtime friend of Adam and a big sports fan.

“He was somebody I felt I could trust, not knowing if he’d be OK with what I thought or if it was the dumbest idea ever,” Barber said. “He was interested in our vision and thought it would be beneficial for the community.”

So Tutterow became a partner and recalls an original plan that was on a much smaller scale.

“It started out as three basketball courts and a workout room and evolved into this,” he said with a laugh. “We started working on it, and things started changing, and it went really fast.”

Tutterow said that a big advantage of having such a large facility for tournaments is that all the games are played at one site.

“Like you’d go to West Forsyth and play some games and then play some games at Davie High,” he said. “Most are not built like what we’re going to have here. You build something like this and pull them in and they will remember it and come back. That’s how it’s evolved into what it is now. There was never anything like this around here when I was growing up.

“They did a study and asked people what do we need to do to make our facility better. That said there’s moms and dads sitting up here with nothing to do while their kids are practicing. They said they’d like a fitness facility, and they wanted something to eat.”

The Barbers and Tutterow quickly realized that with the size of the project and all the moving parts that more expertise was needed, and Neil Cornatzer was brought in as a development partner.

“I have a real estate background, and Jason and I have been lifelong friends,” Cornatzer said.  “He asked me to take a look at it. I didn’t have kids that were in travel sports yet, so it was new to me. Specialization, tourism and sports are huge. I was intrigued by it. I just looked at it from a different lens and was able to come up with what I thought would work.”

“It was collaboration. We traveled and looked at facilities. I’ve invested in different real estate ventures and thought this one would be ideal. We paid for an expensive feasibility study that this area would support the facility. It felt right with the timing and the need, and we put together a good team with adding Lane (Newsome) and him having a lot of experience in the industry.”

Newsome, who spent the last seven years running a similar facility for the City of Greensboro after spending the previous 10 years running volleyball tournaments and events around the U.S. and the world, was brought on as general manager.

“Our goal as a facility will be to grow stronger athletes and a healthy community,” Newsome said. “Teamwork is a focus for me – not only as a team on the court or field, but also as a team operating a classy facility for this great community.  Managing the Greensboro Sportsplex, I was lucky to see what a positive impact a facility like this can have.”

Newsome was invited to work the volleyball events at the 2020 Tokyo Olympics, prior to it being postponed by COVID-19, and served as tournament director for 22 USA Volleyball National Championship events.

“We had to get better at the business of owning a facility of this size, and bringing Neil on board was a vital part of getting this thing rocking and rolling,” Barber said. “And with all his connections, Lane is the glue that makes everything stick together with his expertise in volleyball and sports tourism. All of these things have been huge for us.”

RISE is scheduled to open May 15, but Newsome said that the facility is booked an incredible 76 of the first 78 weekends.

“We’re fortunate to have some really good tournament hosts,” Cornatzer said. “We’re all lined up on the front end of creating those relationships.”

In addition, Twin City Volleyball Academy, a local youth travel volleyball program has signed on to move its program into RISE beginning in May. The program has about 175 participants and will use RISE as its weekly practice facility while also hosting camps, clinics, leagues and tournaments.

Pro Skills Basketball will be moving some of its practice teams into the facility as well.  The program is also well-established in the area and runs an 11-month training program for youth basketball while traveling the region playing tournaments.

“We are seeking other partnerships with youth sports programs looking for practice space in the area,” said Newsome, who added expected participants for programs in the facility, based on information from existing partnership historical data, include 250,000-plus weekday visits and 900,000-plus weekend visits annually.

While general contractor Landmark Builders continues completing construction of the facility, including getting the parking lot paved after all the weather delays, Cornatzer said that the one current access point from the roundabout at US 158 winding toward Truist Sports Park and then to RISE will be repaved by the end of April and that adding a second access off of NC 801 is progressing.

“That means a lot of hotel and room nights,” he said.

And, according to Town Manager Lee Rollins, all of this creates quite a coup for Bermuda Run and the area.

“To couple the new RISE facility with the already well known and established Truist Sports Park at Bermuda Run has all the potential to transform this into a super regional sports venue,” Rollins said. “Throw in the WinMock at Kinderton event center and Tanglewood Park, and we’ve now become a multi-state gem for tourism.”