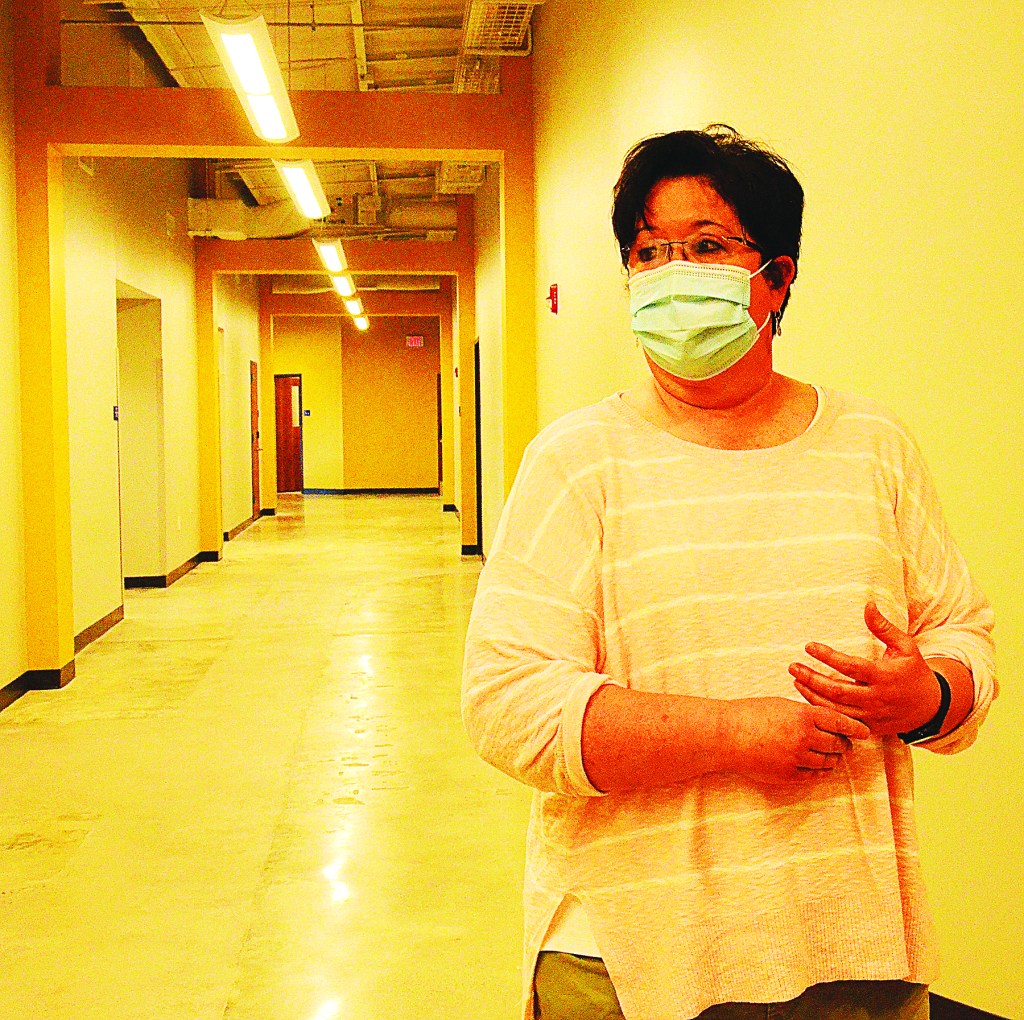 Suzanne Wright is proud to give tours of the new Davie Health and Human Services Department off Farmington Road at I-40.

She’s even prouder to talk about the enhanced services and convenience for residents, as well as better working conditions for the employees.

As director of the department, Wright was asked what was needed before renovations began.

“This was a sketched-out plan with a pencil, nothing to scale, just what we needed,” she said near the end of a tour.  “We decided all of this from just a hand drawing. Then John Fuller (architect) did his magic.”

And to think this plan was conceived – and the move to a new building made – during a pandemic.

As you could imagine, the pandemic has been on the top of Wright’s to-do list for about a year. She’s in charge of the vaccination efforts, the testing efforts, the contract tracing efforts – you name it.

But she’s quick to shift the praise for Davie’s work to become one of the most efficient vaccination sites, ranking the county high in the number of vaccinations given per resident. It couldn’t be done without not only the cooperation of her staff, but of just about every other Davie County agency. Any time that she’s asked for something, people have stepped in.

Even local businesses are donating to the cause, trying to make the process more pleasant for those front-line workers, she said.

Still, it’s enough to keep a health director busy, especially one who is helping take care of elderly parents at the same time. She says most weeks are filled with meetings and phone calls, many related to the pandemic, and she tries to get caught up on paper work on weekends.

Wright, of Dobson, came to Davie County in 2008, after working for the American Cancer Society and Surry County Health & Nutrition. She said she fell in love with public health working in Surry County, after graduating from UNC-Greensboro with a degree in public health.

She was working with the Cancer Society when a friend told her she should apply for the vacant health director’s job in Davie County. She was happy at her job, but the friend insisted.

Even after interviewing for the Davie job, she was hesistant. Former County Manager Jim Stockert told her to take her time.

After prayer and a lot of thought, she called Stockert and told him “this is where I want to be.”

She hasn’t regretted that decision.

“It’s just a big family here,” she said. “Everybody treats you like family. And when it comes to needing something, everybody pitches in. It’s been like that since Day 1. I’m very thankful for Davie County.”

Her favorite thing about Davie is the people, she said with a gleam in her eye, especially the ones who can cook.

Wright helped lead the consolidation of the health, social services, domestic violence prevention, veterans services,  and senior services departments into one department. That wasn’t easy, either, as employees were concerned about their individual departments. Again, she shifted the praise, this time to then county manager, John Eller.

One of her few disappointments was when the county decided to farm out home health services to a private company. That department worked wonders for Davie residents, she said.

“There’s no normal day here, and no two days are alike.”

The new building will allow for expansion, and Wright already has ideas. A pharmacy is in the works, and she’s working to get an adult primary care provider to work inside the building.

Almost all of her 116 or so workers are now under one roof – a first. They were housed in several buildings. Offices that needed to be private really weren’t. Copy machines lined hallways.

And there are plenty of restrooms – for the public and for the employees.

There’s talk about trying to open a coffee shop that would serve health and human services and the sheriff’s department, one that is operated by individuals with developmental disabilities.

“It’s invaluable to get us all under one roof,” she said. “I’ve always appreciated the management pieces of Davie County. People have invested wisely and spent wisely.”

Hundreds of residents visit the department daily. YVEDDI has added the building to its Mocksville Circular Route.

“We’ve tried to design it as much for the customers as for us,” she said.

Wright has no plans to move. She hopes to retire from Davie County.

“When you have people who want you to do well, and want the community to thrive … people will reach out and help,” she said. “It will give us more opportunities to work together.”