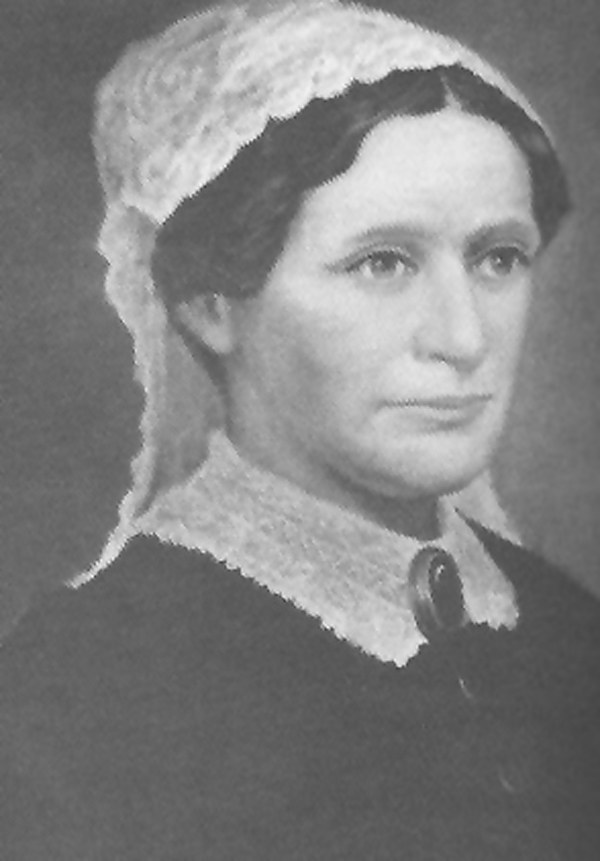 A number of the wives of Presidents of the United States, including Elizabeth Monroe; Letitia Christian Tyler, the first wife of John Tyler, Margaret Mackall Smith Taylo, and Jane Means Appleton Pierce, moved to the White House, stayed in the family quarters, and had someone else serve as hostess.

Eliza McArdle Johnson joined that group. She was a strong supporter of her husband, Andrew Johnson, but she did not perform the duties usually assumed by the First Lady.

Eliza McCardle was born in 1810 in Leesburg, Tenn. to John McCardle, a shoemaker, and his wife, Sarah Phillips McCardle. The family moved from Leesburg, to Greeneville, Tenn.    Eliza’s family was poor, but they managed to send her to Rhea Academy so she was able to get some education.

Andrew Johnson and his mother moved from Raleigh, N.C., where he was born, to Greeneville, Tenn. after his father died. The book, The First Ladies, by Margaret Brown Klapthor says, “Eliza was then 16 and Andrew only 17; and local tradition tells of the day that she first saw him. He was driving a blind pony hitched to a small cart and she said to her girlfriend, ‘There goes my beau.’” He did indeed become her beau, and, about a year later, the teenagers, Eliza McCardle and Andrew Johnson, were married.

Andrew had been apprenticed to a tailor while he lived in Raleigh. Even though Johnson fled before he finished his 11-year apprenticeship, he evidently had learned enough to set up his own tailor shop in Greeneville. Not only did Johnson set up a shop, but he became a successful tailor. Johnson had never really been to school and the story goes that his wife taught him the basics—“readin’, writin’ and ‘rithmetic.” Some sources say that Andrew could read a little, but his wife helped him become a more efficient reader. Whichever story is true – Eliza McCardle Johnson helped her husband gain some basic educational skills. Eliza continued to educate her husband by reading to him as he sat at his tailor’s bench. In addition to helping her husband, Mrs. Johnson also cared for her family. She and Andrew had five children in all.

As Andrew Johnson’s business became more successful, he began to get interested in local political affairs. He would make speeches about matters that interested him. Mr. Johnson got elected first to local offices and then to state offices. He was finally elected to the U.S. Congress, first as a representative and then as a senator. Eliza supported her husband as he moved from level to level. He was a U.S. Senator when the Southern states started to secede from the Union. Johnson was pro-slavery; he even owned slaves himself, but he was opposed to the states leaving the Union. Because of his belief that the United States should remain united, he did not resign his seat in the Senate when all of the other Southern Senators resigned. The fact that Andrew Johnson, a Southerner, remained loyal to the Union attracted the attention of Abraham Lincoln. Lincoln chose Andrew Johnson to run as vice president with him in the 1864 election.  The Lincoln/Johnson ticket won and the two men were sworn in March 1965. A month later, the unthinkable happened. Abraham Lincoln, the 16th President, was assassinated by John Wilkes Booth, a Southern sympathizer. In April 1865, Andrew Johnson became the 17th President of the United States.

Eliza Johnson had supported her husband throughout the years in which he been elected to office after office. She continued to support him by moving to the White House. By the time the Johnsons made the move to the White House, Eliza was an invalid. She had tuberculosis. First Lady Johnson stayed in her room on the second floor of the White House where she enjoyed her children and grandchildren. Eliza Johnson never acted as a hostess at the White House. Her daughter, Mary Patterson, handled the social duties.  These words are found in the book, The First Ladies, by Margaret Brown Klapthor: “As a schoolgirl, Martha had often been the Polks’ guest at the mansion; now she took up its social duties. She was a competent, unpretentious, and gracious hostess.”

Even though she was never able to take care of the duties usually assumed by the First Lady, Eliza Johnson was always there for her husband. When President Andrew Johnson was impeached by the U.S. House of Representatives, an impeachment brought on by his enemies, his wife stood firm. She said that he would not be convicted when the trial was held in the Senate. When President Johnson was acquitted by one vote in the Senate, his wife said: “I knew it.” Even though he was not impeached, the remaining years of the Johnson presidency were tough.  Eliza Johnson was glad when her husband’s term ended, and they could return to their home in Tennessee.

According to Life Magazine’s  First Ladies, Eliza Johnson once told historian William Henry Crook: “I do not like this public life at all … I often wish the time would come when we could return to where I feel we best belong.” Mrs. Johnson’s wish came true in 1869. Eliza was happy to be at her Tennessee home in Greeneville, but her husband was not as content.  He ran unsuccessfully for the U.S. House of Representatives and Senate several times and was finally elected to the Senate in 1875. He died a few months later on July 31, 1875. He was buried in the cemetery near his home in Greeneville.

Andrew Johnson was the only President of the United States who served in the Senate after having served as President.

Six months after the death of her husband, Eliza McCardle Johnson, died at the home of her daughter, Martha Patterson. She was buried beside the man who she had so strongly supported through “thick and thin.” There is a large memorial marker in the Greeneville Cemetery honoring the former President of the United States and his family.

Eliza McCardle Johnson, the daughter of a poor shoemaker, ended up as the wife of an uneducated man who became the President of the United States. She was happiest, not while living in the White House, but living in her home in Tennessee. The house in Greeneville to which the Johnsons returned after Andrew Johnson completed his term as President, is open to the public. The National Park Service is in charge.