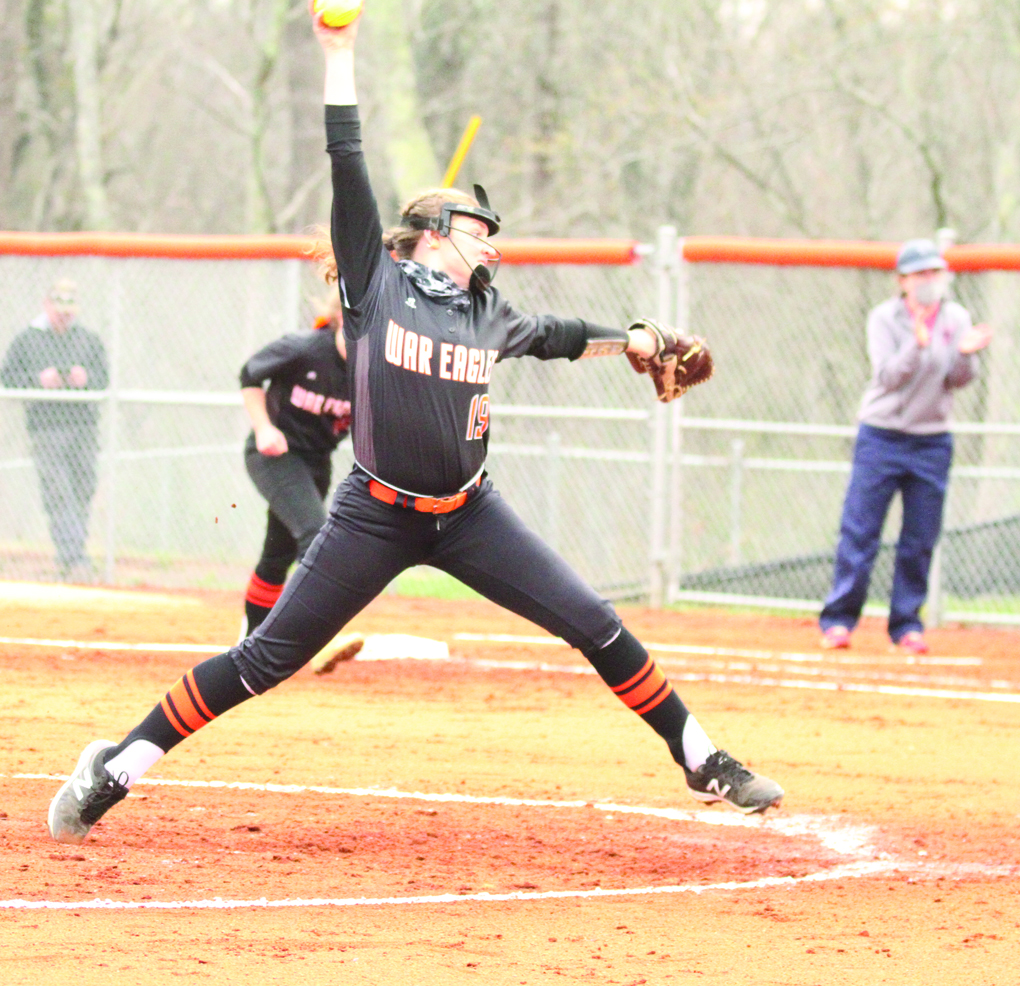 Addison Hendrix winds up for a pitch.

Davie’s varsity softball team struggled tremendously in 2020 – it was 0-7 when the rest of the season was called off by coronavirus – and things looked grim in the second inning of the 2021 season opener against visiting Forbush on March 17.

But the War Eagles scrambled, scratched and clawed their way to a 15-12 victory over a team that’s been a 2-A powerhouse for years.

It was the first win for second-year varsity coach Morgan Wyatt. It ended a nine-game losing streak. And Davie can thank the Dirks sisters, who combined for nine RBIs.

“I don’t know the last time we beat them,” Wyatt said after Davie ended a five-game losing streak to the Falcons, who went 6-0 in 2020 and suffered their first loss since the second round of the 2019 playoffs. “It felt pretty good to come out of there with a win.”

Davie led 4-2 after the top of the second, but it had a garbage can fire on its hands after the bottom half, when Forbush used seven hits, a home run, three walks and an error to score eight runs and take a 10-4 lead.

But a heartening rally followed. In the third, Davie poured across four runs to tie the game at 12. The third hit of the inning was the biggest, a three-run double by London Dirks.

“It couldn’t have come at a better time,” Wyatt said. “She’s been seeing the ball well. She got voted by her teammates as a captain, and she’s definitely deserving of it because she puts in the work and her teammates respect her. She’s definitely showing out in practice and she stepped up big-time for us. She’s got a bulldog mentality. She reminds you a little of Anna Devereaux (who is a junior starter for the Charlotte 49ers).”

Sydney Dirks saw her older sister’s game-tying double and raised her, hitting a three-run homer in the fifth to plate L. Dirks and Leah Grimes and give Davie the 15-12 lead.

The power was not a surprise; S. Dirks hit .304 with two homers in 23 at-bats during the abbreviated 2020 season. Karley Queen and S. Dirks are the top returners hitters, the former hitting .363 in 22 at-bats.

“It was a no-doubter. It was a moon ball,” Wyatt said. “She has a beautiful swing. You can tell she’s put in good work. Her swing reminds me of Sierra Ferguson with how smooth it is. She’s got a lot of power, and she’s only going to get bigger and stronger.”

Taylor Hilliard (2-3) and Kaitlin Mischler (2-3) matched S. Dirks with two hits. Melanie Gobble had a double as Davie scored the most runs in 37 games.

Davie had 10 hits and 12 walks/hit by pitches to offset Forbush’s 15 hits. Chesney Shook got the win after working 5.2 effective innings in relief. Of her 82 pitches, 55 were strikes. She allowed four runs, but only two were earned. Showing her mettle, she retired the 1-2-3 batters in the fourth and set down the 3-4-5 batters in the seventh.

“Addison (Hendrix, who started in the circle) has a lot of potential as a freshman,” Wyatt said. “Once Chesney got in a groove, she kept them offbalance with some offspeed stuff. She rose to the occasion.”

Shook got the win by tossing 6.2 innings. She allowed one run and walked none.

Notes: Both games were nonconference. … Three War Eagles have college futures. L. Dirks has committed to Charlotte, Queen to Brevard and Kaylyn Nuckols to Methodist. … Davie-Forbush was the highest-scoring game in 49 games, dating to an 18-11 win at South Iredell in March 2018.