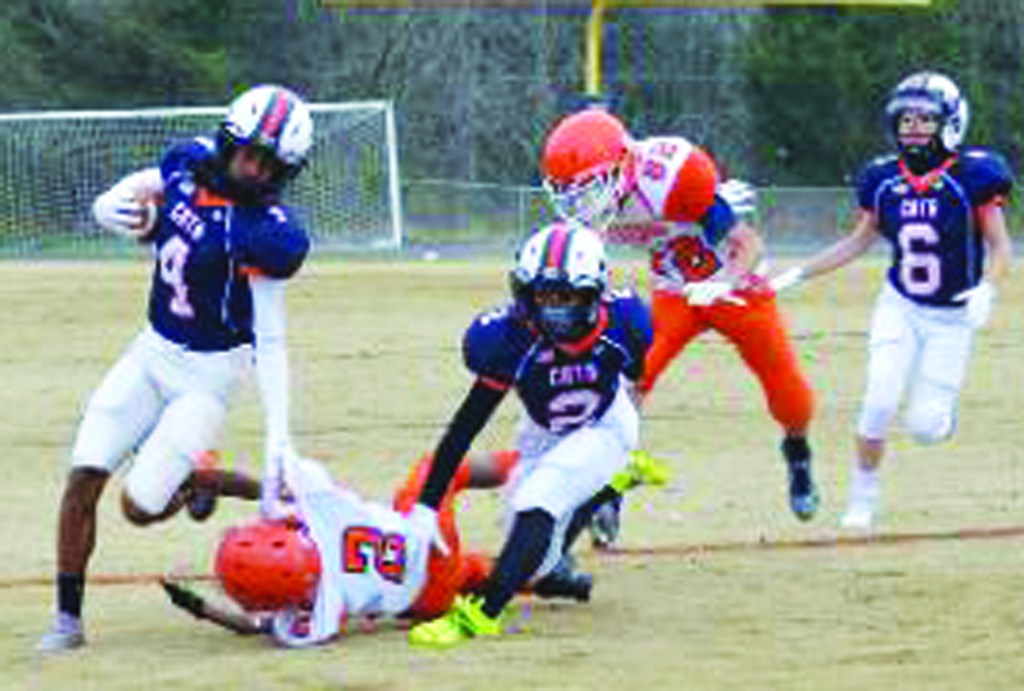 This was easy to see coming. South Davie’s football team is down this year. North Davie was awfully good.

The Wildcats’ first helpless victim was Starmount on Feb. 25. They never released the vice grip, crushing South 54-0 to cap a 4-0 season. North hosted the game on March 17.

“I feel this is the most athletic team that I’ve had,” North coach Timmy Allen said. “Last year’s team was really athletic, but this year’s was more athletic from top to bottom. We had 18 eighth graders (out of 26).”

Outscoring opponents 168-0, North achieved a 4-0 record for the first time in 14 years.

“It’s a COVID year, just four games and we were trying to keep the shutout (streak) going,” Allen said. “I’ve been smacked around by Ellis and South Davie. I’ve been at North for nine years and I’ve only beaten South twice.”

Quarterback Coy James has been routinely spectacular, and this game was no different. He had 171 passing yards, 44 rushing yards, 28 receiving yards and racked up five touchdowns (three passing, one rushing, one receiving).

The receiving TD was something different for James, who caught a 35-yard pass from Braxton Hunter, who took a pitch from a running back on North’s version of the Philly Special.

“We put it in a while back and we wanted to run it,” Allen said. “The season is so short and we hadn’t had a chance to run it, so we threw it out there. I didn’t even know it was coming; Drew (Kakouras, offensive coordinator) called it. They actually covered it well. Coy just broke a tackle.”

One of Shermer’s scores was on a screen pass. His yards after the catch were highlight-reel stuff.

“They were bringing some heat, so we dialed up a screen,” Allen said. “The offensive line did a good job selling it. Ryley broke four or five tackles. South’s kids had good angles on him, but he fought through the tackles. It was unbelievable.”

“Brett made play after play at defensive end,” Allen said. “He’s one of the smallest kids out there, but he is tough as nails. He was taking on kids twice his size and playing the end position exactly how we wanted him to play it. They stopped running to his side.

“Carson and Ryley light it up at linebacker. They play real fast downhill. I mean, holes would open up and they would step in and fill it. We had d-linemen that were disruptive, but the linebackers stepped up all year. They were game-changers.”

Notes: South dropped to 0-3 with one game remaining. … North stopped a four-game losing streak in the series, beating South for the first time since a 14-0 decision in 2015.

Archer Richardson, who accounted for 16 points while scoring two touchdowns and a pair of two-point conversions, was the inspiration, and the Ethan Driver/Jackson Powers air combination was the dagger as the Jaguars picked up a very satisfying win one week after getting hammered by North.

The game was played at Ellis on March 17.

Richardson only needed 12 carries to accumulate 125 yards rushing. “And they were some tough yards,” assistant coach Mike Dinkins said. “He had two runs for 20-plus yards, but it was (mostly) tough yards up the middle and off-tackle.”

Ellis (2-1) was ahead 16-8 when the Falcons threatened to draw within two or tie. They scored on a 25-yard play, but it was brought back by a clipping penalty. A sack and an incompletion followed as Ellis remained in front by eight.

Forbush did pull within 16-14, but Ellis had a decisive answer. With 1:42 remaining, Driver threw an 18-yard TD to Powers to seal the deal.

“We had 200 rushing yards,” Dinkins said. “We definitely controlled the ball.”

“Connor made several key plays,” Dinkins said. “He knocked down a long pass that they thought they were going to catch when it was 16-8. Jackson had several tackles for losses.”