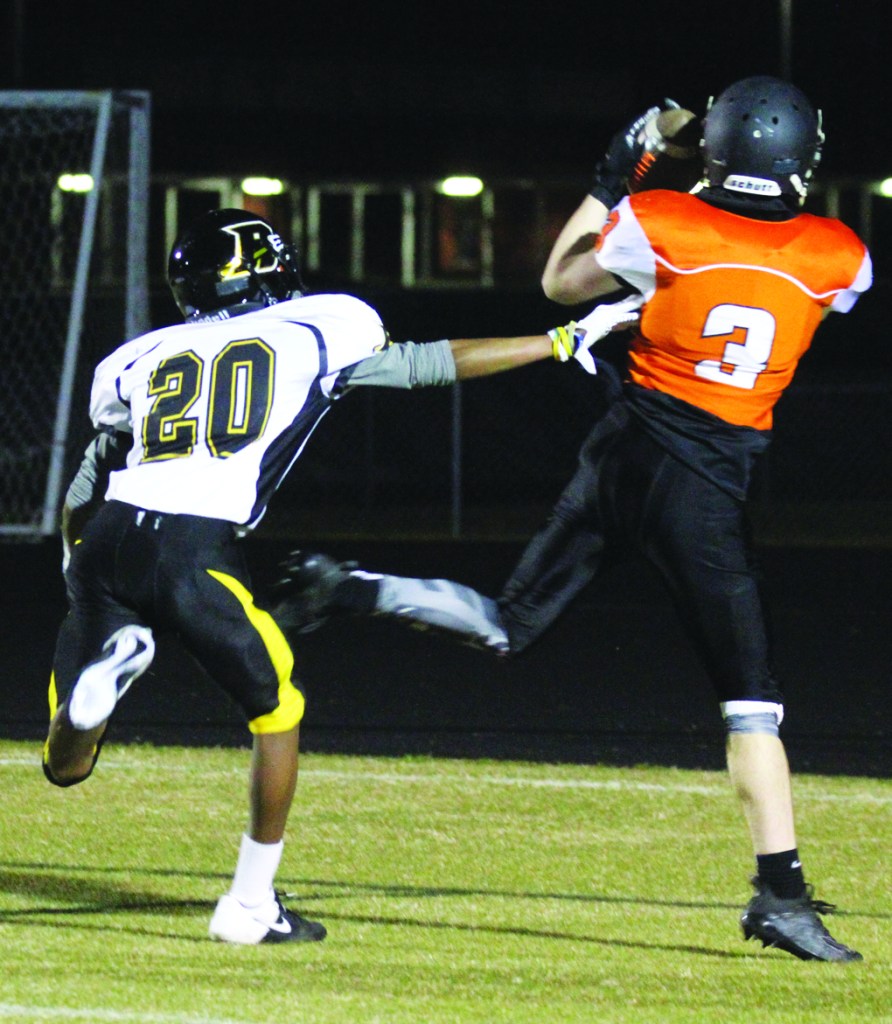 For the second week in a row, the Davie JV football team played demolition derby. It squashed visiting Reynolds 48-0 in the first Central Piedmont Conference game on March 11.

The 44-0 beating that Davie dealt West Rowan in the opener was the largest margin of victory in at least 25 years. So there’s no telling the last time the JV won by 48.

The rapid development of the offensive skills players was evident. Running back Markel Summers had six carries for 61 yards. Quarterback Ty Miller ran for 45 yards and two touchdowns on five attempts, and he hit 5 of 8 passes for 88 yards and three touchdowns.

“He’s a wide receiver first and foremost and he’s the backup running back,” coach Tim Devericks said of Helton. “Both of those guys (Summers and Helton) are pretty athletic.”

“Aidan made a good catch in traffic,” Devericks said.

Defensively against West Rowan and Reynolds, the War Eagles have been tough against the run, stingy against the pass and just plain nasty all the time.

“We had a good swarm to the ball on all three levels,” defensive coordinator Blaine Nicholson said.

There’s freshman free safety Mason Caudle. “They tried to test us in the underneath area,” Nicholson said. “They kept trying to throw this quick spot route to the slot receiver, and Mason absolutely drove on it and broke up two passes. He laid huge licks. That set the tone on the back end.”

There’s freshman edge rusher Brandon Wood. “He was being disruptive, making tackles in the backfield and using strength and power moves,” Nicholson said.

There’s freshman lineman Matty Warner, who pounded out three sacks. “I’ll tell you what, we’ve been sent some good guys from the middle schools,” Nicholson said. “We’re really deep in the trenches on offense and defense. It’s easy to call a defense when your DL is wreaking havoc. Matty was doing what he was supposed to do. He defeated his block and had good pursuit on the ball. He was fired up.”

There’s sophomore Jake Cass, a 6-4, 375-pound nose guard. “He’s an absolute mountain of a man,” Nicholson said. “He’s being really active and making a lot of plays. He’s holding up a lot of blockers. He’s even making tackles for loss. For a guy that size to be able to move around and help us out … we’ve got a great rotation.”

There’s sophomore Levi Miller, who stepped into the DL mix when John Stokes left with an injury. “Levi got some hurries and pressures,” Nicholson said. “We’re deep up front. Levi didn’t play last year. He came in and did pretty well. He’s another athletic guy.”

And there is freshman cornerback Owen Brandon. “They threw toward him one time and he wasn’t having any of that,” Nicholson said. “That’s two games in a row that they’ve not tested him. He’s a great coverage. I think he’s going to end up being a pretty good ballplayer for us. He’s got good technique. We can put him on one side, call man coverage and he’s got his guy. He’s fast and he’s willing to stick it up in there.”

Notes: The halftime margin was 29-0. … Nicholson gave credit for the fast start to the JV head coach, Perry Long. “He’s got them focussed on discipline and effort and he’s got great juice with them,” he said. “Hopefully the JV kids are raising the standard for our program going forward.” … When you score 92 points in two games, the offensive line is doing something right. The OL starters against Reynolds were sophomores Hunter Dyson, Charlie Frye and Angel Mondragon and freshmen Chad Russell and Evan Copeland. “The guys up front did a good job of  making room for us to run,” Devericks said. “The first-, second- and third-teamers did what they were coached to do.”