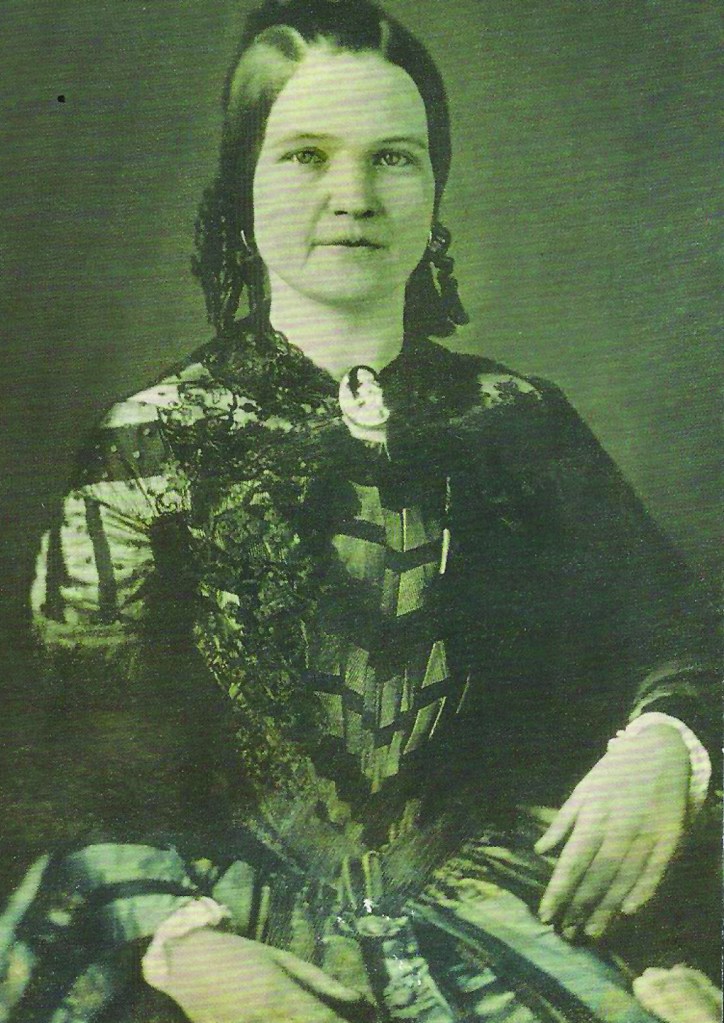 The story of Mary Todd Lincoln is tragic in many ways. She seemed to create some of the problems which beset her. Others were certainly caused by external forces over which she  had no control.  ll of the problems resulted in a troubled life for Mary.

Mary Todd was born on Dec. 13, 1818 in Lexington, Ky. Her father was a prosperous banker so Mary was able to attend the best schools. She was smart and excelled in a number of areas. The first major tragedy with which Mary had to deal was the death of her mother when she was 6 years old. Her father remarried, but Mary’s home life was not happy.  When she was about 18, she went to Springfield, Ill. to live with her sister.

Young Miss Todd was a pretty, vivacious, well-educated young lady, who seemed to be a bit high-strung. She attracted the attention of several young men in her new home.Among her suitors was tall man who usually wore rumpled clothes.

The book, Lincoln’s White House by James Conroy in speaking of Abraham Lincoln says:  “His height could be a shock. One caller said he drew himself out like a telescope as he rose, and there seemed to be no chance that his getting up would end.”

In spite of all of that Mary Todd, who was an ambitious lady, could evidently see a spark of ambition in that lanky, young lawyer, Abraham Lincoln.  Mary and Abraham had an off-again, on-again courtship, but it was Lincoln who finally won the hand of Miss Mary Todd.

Mary Todd and Abraham Lincoln were married at the home of her sister on Nov. 4, 1842. Mary was 24 years old and Abraham was 33 years old.

The Lincolns lived in Springfield where Abraham had a growing law practice. They lived in several places in that town, but were finally able to buy a two-story Greek-style house. During their Springfield years, Mary and Abraham had four sons. Mary was often left at home to care for her sons while her husband traveled the court circuit representing clients. It put a lot of stress on Mary to care for her children and the house, even though she did have some help. At times Mary would become distraught and would have such a tantrum that the servants would simply flee. If Abraham was present when his wife got upset, he would simply pat her arm and say, “Now, Mother” and she would seem to settle down.

Lincoln’s law practice flourished as did his interest in politics. He was elected to be a member of the Illinois State Legislature and later for one term in the U.S. House of Representatives. During all of that time, Mary stayed in Springfield with her children. It is easy to see why she would sometimes be overcome by  the responsibility. While living in Springfield, the second-born Lincoln son, Eddie, died. Eddie’s death was very hard for Mary.

Abraham Lincoln was chosen as the Republican candidate for President of the United States in 1860.  Mary was right.  The awkward suitor that she chose to be her husband because she could see a  spark of ambition was elected as the President of the United States. Mary Lincoln was so happy to become the wife of the President. Beatrice Gormley in her book, First Ladies Who Called the White House Home, says, “Mrs. Lincoln rejoiced in his victory believing that Mr. Lincoln could unite the now divided nation. She was looking forward to reigning over Washington Society.”

All of the remaining Lincoln family moved into the White House, except Robert, who was away at school. Mrs. Lincoln felt that she had to dress in the latest fashion to be accepted by Washington Society.  She would often go on shopping trips to New York and Philadelphia.  The merchants there were happy to give credit to the wife of the President. As a result, Mrs. Lincoln spent money lavishly—if she needed one pair of glove, she would buy 12 pairs. She bought the finest dresses and great amounts of jewelry.   She did not let her husband know how much money she was spending because she knew he would be furious. She continued to buy and continued to keep her spending habits a secret. When it was time for the next election, Mrs. Lincoln so wanted her husband to win because she thought she could find a way to take care of the debts if he was elected to a second term.

The Congress appropriated $20,000 for each President to use to refurbish the White House. Mrs. Lincoln ran through that money in no time flat. According to the book, The American President by the Kunhardts, “Mr. Lincoln saw the bills and explored. He said, ‘It can never have my approval…it would stink in the nostrils of the American people to have it said that the President had approved a bill overrunning the $20,000 appropriation for flub dubs for this damned old house when the soldiers cannot have blankets’.” It is easy to see why Mary was so afraid that the President would find out about her debts.

There was much less entertaining in the White House during the Lincoln administration because the country was at war, but there were some social functions. Mary never was really able to reign over Washington Society as she dreamed of doing. Mrs. Lincoln spent time visiting the wound soldiers in the hospitals around Washington instead of entertaining.

The Civil War occupied the mind of the President, but he still made time to be with his family. He loved to spoil his sons. The third-born Lincoln son, Willie, got very ill. The President and his wife were having a social function at the White House the night that Willie was so sick. The President would go upstairs, sit with the sick child, and then his wife would take a turn. There was nothing that the doctors could do for Willie.  He died.  Mary Lincoln was distraught. She stayed in bed for days. Later she had séances in the White House in the belief that she could contact Willie through a medium. The President was patient with his wife through all of that.

Finally, after much agony, the Civil War was over. The Lincolns were so happy. They planned to celebrate by attending the play, “Our American Cousin” at the Ford Theater. Feeling relieved, the President took his wife for a carriage ride around Washington in the afternoon before going to the play. While the Lincolns were watching the play that night, an assassin, John Wilkes Booth, slipped into their box and shot the President. The wounded President was taken to the Peterson House across the street. Mary was so distraught that they had to remove her from the room where the President lay. Lincoln died without ever regaining consciousness.  Mary was so devastated that she simply stayed in her bed at the White House and did not attend the funeral. The President’s body was taken by train to Springfield for burial.

After her husband’s death, Mary Lincoln was one disturbed, lost soul.

Her one friend seemed to be her dress-maker, an ex-slave named Elizabeth Keckley. Elizabeth remained Mary’s friend even while she was terrified of being poverty stricken and tried all kinds of schemes to get money, including trying to sell her clothes—a scheme that did not work. Elizabeth eventually wrote a book which included her experiences with Mary titled, Behind the Scenes.

Mary went to Europe to live for a while because she thought she could live cheaper there. She and her one remaining son, Tad, moved from place to place.She was continuingly asking the Congress to give her a stipend. The Congress finally granted her $2,500  per year, but she asked for more. At one point, she became so irrational that her oldest son, Robert, had his mother put in an insane asylum. That made Mary extremely mad and she signed herself out. That episode farther alienated Mary from her son, Robert, to whom she had never seemed to be close.

Mary’s son, Tad, died when he was a teenager so she was really left alone.  She finally went back to her sister’s home in Springfield. She died there in 1882 and was buried in the same tomb as her husband and three of her sons. Her son Robert was buried at Arlington Cemetery in Washington. Two years before she died, Congress increased her stipend to $5,000 per year, which was also given to some of the other former First Ladies.

It is easy to see why Mary Lincoln’s story is considered a tragic one.  The poor lady lost all of her family members except one, and she felt that she had been left penniless. Not only did she lose so many family members, but one member of her family, her husband, was shot right before her eyes.

The Lincoln Home in Springfield is open to the public. The Lincoln Museum and Library which is near that house is an outstanding place – one of the best Presidential Libraries. There are many other sites with a Lincoln connection open to the public, including the Ford Theater, the Peterson House, and the Old Soldier Home.