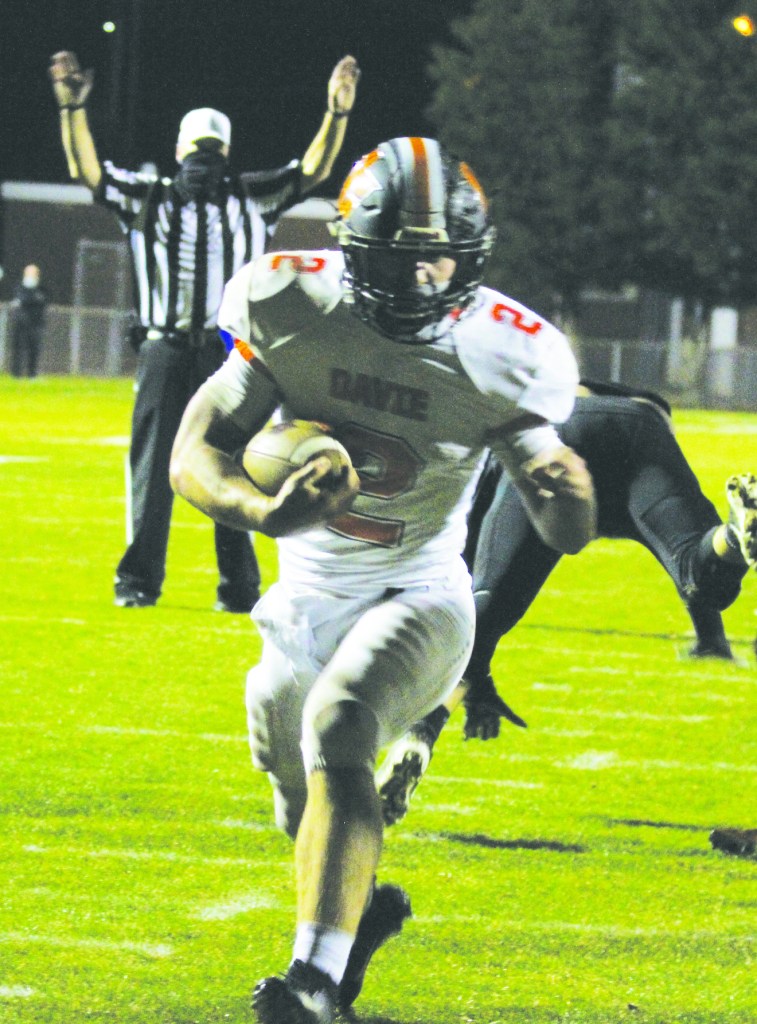 Tate Carney powers past the goal line for one of his 8 touchdowns. - Photo by Mark Floyd

But the Demons had the ill fortune of facing a runaway locomotive named Tate Carney, who roared out of the station and never looked back. The junior running back authored the most ridiculous, glorious, incredible performance in Davie’s 65-year history. He rushed for (deep breath now) 327 yards, breaking Cooter Arnold’s program record from 2004, and scored eight touchdowns (each of them on the ground). Talk about epic, he tied the state record for single-game TDs and became just the sixth player to turn the trick.

In a game that was like an amusement park ride, Carney’s majestic effort produced a 62-43 road win Friday in the Central Piedmont Conference opener for both teams. The War Eagles, who are averaging 46 points, improved to 3-0 overall. The Demons slipped to 1-2.

“That kid works his tail off,” coach Tim Devericks said. “When you talk to him, he’s going to say the guys up front gave me an opportunity, and they did a phenomenal job with a loaded box. They blocked their tails off for him.”

Carney’s pinball numbers included 10.2 yards per carry, three TDs in a span of 5:12 and a 41-yard reception that gave him 362 rushing/receiving yards, another Davie record. He gained – this is just nuts – 132 yards if you count just his TD runs.

“Everybody up front kept it moving,” Carney said of left tackle Camden Beck, left guard Merritt Killian, center Ashton Williams, right guard Ethan Doub and right tackle Spencer Williams. “When the fourth quarter rolled around, there were so many holes to pick from I just had to run up one. The receivers were blocking their butts off. It was so much fun being out there. I’m happy to have it, but I couldn’t have done it without the o-line.”

Senior receiver Jack Reynolds, who is every quarterback’s dream, played one of the greatest supporting roles you’ll ever see, catching eight of Alex Summers’ nine completions for 176 yards.

“If Tate scoring eight touchdowns every game gets us the dub, I do not care,” Reynolds said. “He can score as many touchdowns as he needs. If it ain’t broke, don’t fix it.”

On the game’s first play from scrimmage, Davie crossed up Reynolds’ defense by splitting Carney out and employing five receivers. Nobody covered No. 22. J. Reynolds caught the ball and did a stutter-step move at the Reynolds 40 to shake the only defender who had a chance. J. Reynolds was gone for a 64-yard TD. Fourteen seconds in, it was 7-0.

“I guess they weren’t ready for us to line up that way on the first play,” Reynolds said. “We originally had a run play for Tate to motion him back in, but Alex noticed the coverage was off for them and he quick-snapped it and threw a seam. Alex did a good job all night on the coverages.”

Reynolds answered immediately, driving 65 yards as Davis completed a 14-yard fade in the end zone to Yates to tie it at 7.

On third down for Davie, Summers hit Reynolds for 13 yards. On the next play, Carney busted through the middle, used a stiff-arm for separation and rambled 39 yards to the Reynolds 7. Two plays later, Carney took a direct snap from the wildcat formation and scored.

On a QB draw, Davis used a cutback to gain 32 yards to the Davie 1. Receiver Tyreik Leach would score. The kick failed, but Davie’s lead was cut to 14-13.

After Davie’s Beaven Arey punted – it would be his only punt of the night – Davie’s defense came up with a stop. Linebacker Gage Recktenwald, who paced his team with 17 tackles, stopped Phelps for a minimal gain, cornerback Justus Tatum buried Yates 6 yards back on a screen pass and Mason Shermer sacked Davis on fourth down.

Davie went for it on fourth-and-14 from the Reynolds 25. Summers connected with Reynolds over the middle for 22 yards. A 15-yard penalty pushed Davie back, but Carney got 14 of those yards back on one play and he scored from the 1 for a 21-13 lead.

The game kept getting wilder and wilder. Davis rumbled for 20 yards on third down, and he hooked up with Yates on another deep fade, this time capping an 88-yard scoring drive. Davis ran in a two-point conversion to tie the game at 21.

Davie responded with a scintillating, three-play drive. Reynolds caught the ball on a shallow cross, ran over a defender and picked up 19 yards. Then Carney ran for 15 and 26 yards as Davie regained a 28-21 lead.

After Hunter Rose and Trevor Richardson sacked Davis to force fourth-and-18, the half ended with Reynolds at the Davie 2 as time expired at the end of McMillian’s 28-yard reception.

The teams combined for 641 yards in the first half alone. Reynolds was on pace for 300 receiving yards. Carney had 129 rushing yards – and he was just warming up.

Reynolds got the ball to start the third quarter and promptly motored 65 yards, scoring when Davis rolled left, delivered a wicked stiff-arm and ran 11 yards. Davis eased in on the two-point play to give the Demons a 29-28 lead.

“Phenomenal player,” Devericks said of Davis, who has committed to Fayetteville State. “I mean, multiple times we had pressure on him and he would break a tackle and make a first down or make a huge throw. If you do too much for (Yates), (Davis) is going to hurt you running the ball. If you do too much with (Davis), (Yates) is going to hurt you catching the ball. (Phelps) is a very elusive runner. That (sophomore) has a bright future.”

Summers’ fourth-and-10 pass to Chase Robertson fell incomplete, and the Demons went back to work. Back-to-back receptions by McMillian covered the final 35 yards, and McMillian also caught the two-point pass as the hosts barged to a two-possession lead (37-28) with 5:22 left in the third.

“That’s the first time we’ve faced a lot of adversity in a game, and I told them I’m proud of them,” Devericks said. “They kept playing through it. There was no one complaining. Everyone was positive, and that’s what you’ve got to have to persevere through tough times.”

Indeed, the War Eagles were not rattled. They took their next snap from their 37. The magnificent Carney took care of those 63 yards in four plays. On a screen pass, he hurdled a Demon at the Reynolds 38, ran through a would-be tackler at the 32 and picked up 41 yards to the Reynolds 5. After he scored on the next play, kicker Willy Moure missed his first point-after try in 16 attempts, but Davie was only down by three (37-34).

Davis overthrew Yates on third down and his punt only traveled 24 yards, setting up Davie near midfield. Carney rang up 49 yards in three consecutive bursts as Davie nosed ahead 41-37.

“That was like a basketball (score),” Devericks said. “We might as well play a little March Madness while we’re out here.”

Yates took the ensuing kickoff to the house, but a block in the back negated the return and Reynolds went three-and-out for the second time in a row.

On third down, Carney swept around right end, got a block from receiver Za’Haree Maddox and sped 42 yards as Davie surged to a 48-37 lead with 20 unanswered points.

Davis and company showed enormous heart, putting together a 12-play, 70-yard TD drive. The two-point pass failed, but Davie’s lead had been trimmed to 48-43 with 6:33 to go.

The War Eagles went back on the attack. Carney threw a stiff-arm behind the line of scrimmage to free himself for 15 yards. Summers escaped a sack, turned a big loss into a 3-yard gain and set up a manageable third-and-6. That’s when J. Reynolds made a clutch, diving catch over the middle for 20 yards to the Reynolds 13.

“He’s a special, special player,” Devericks said of the kid known as Jackie Moon. “I don’t take for granted the things that he’s able to do.”

“I made sure to tuck it in my stomach and turn my body so there wasn’t a question,” Reynolds said. “Alex put that in a perfect spot. I think the DB knew what was coming, so he was inside coverage on me. Alex led it perfectly inside.”

Backup running back Brodie Smith pushed the ball to the Reynolds 7 on back-to-back runs. Then Davie dialed up the wildcat. With Beck and Caleb Bowling supplying blocks, Carney walked in from the 2 as Davie took a 55-43 lead.

For long minutes, you wondered whether Davie’s defense was ever going to cool off Davis and the Demons. The defense chomped down hard on the bit down the stretch, stopping Davis for a 3-yard gain on fourth-and-10 and turning back four of Reynolds’ last five possessions.

Davie took over at the Reynolds 30 and the irresistible force continued his rendezvous with the record book. Carney was virtually untouched on a 30-yard explosion between the tackles. That tied the state record for TDs and put the game out of reach at 62-43 with 2:39 left.

At that point, Carney had 321 rushing yards, one shy of Arnold’s magic mark. Bowling intercepted Davis with 1:49 on the clock, and Smith ran for 27 yards. With time ticking away, Carney came back out. He had one last crack at the improbable. On his 32nd carry, he plowed up the middle for 6 yards. It’s a moment that will live forever.

“That’s really cool,” Williams said. “It makes me proud to know I was part of that. And I’m really proud of Tate because I know he puts his all into everything he does – in practice and in the games.”

• Davie came in ranked 15th in the state by MaxPreps and 10th in 4-A. … The 15 TDs led to the highest-scoring game in Davie annals. The old mark was set in 2008, when Davie beat Page 50-49 in overtime. … Davie has won 10 of 11 against Reynolds. … Bowling’s second pick of the season was the game’s lone turnover. … Davie’s secondary held Davis to two completions on his last eight throws. … Former War Eagle Isaiah Lytton had four catches for Reynolds.

• The War Eagles could do no wrong offensively, piling up 588 yards, going 5 for 8 on third downs and averaging 10.6 yards per play. … Carney’s previous career high for rushing yards was 195, a mark he had hit twice. … Thanks to Summers’ 9-of-16 passing with no turnovers, Reynolds recorded his seventh career game with eight or more receptions. It was his sixth 100-yard game. He was 4 yards short of his high in receiving yards (he had 180 at West Forsyth in 2019). … Moure could be excused for the one missed kick; he went 8 of 9 on the night.

• There were anxious moments midway through the second quarter when, following the Carney TD that made it 21-13, Beck went down and stayed down. The sledgehammer finally walked off under his own power, and he never missed a play. “I think I stepped weird,” he said. “The field was soft and had so many holes. I rolled my ankle, but I’m good now.” … Guard Zymier Lewis missed his second game with a knee injury. “It sucks for him, but hopefully he’ll be back later this season,” Williams said. … J. Reynolds saw spot duty at cornerback. He broke up a pass in the end zone early in the third, although the Demons would score on that drive. “I started (last) week practicing defense, so I was a little new to the coverages,” he said. “We’ll see what happens coming up.”