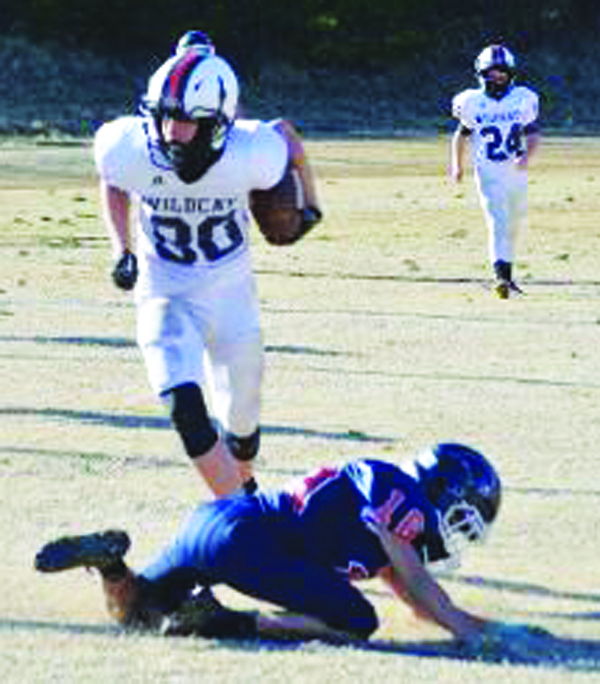 The North Davie football team’s game at Forbush on March 4 ended before it began. Wildcats 50, Falcons 0.

As expected, Coy James and Landon King shined. James threw for 144 yards, tossing touchdowns to King, Brady Marshall and Ryley Shermer. James ran for a TD. And he did all that in the first half.

Nothing more really needs to be said of the quarterback.

“We attempted between 10-15 passes and only missed one,” coach Timmy Allen said.

The offensive highlights, of course, don’t tell the whole story. The defense stonewalled Forbush all day. Hood and Cayden Glass had interceptions. Hood also recovered a fumble as North posted back-to-back shutouts for the first time since 2010 (8-0 over Brown and 36-0 over South Davidson).

“I think they had negative yards of offense,” Allen said.

“Carson and Ryley anchored us at linebacker,” he said. “They were like heat-seeking missiles. They were reading it and getting to the ball fast. The Sink twins played really well on the d-line.”

Notes: This was Forbush’s season opener. … North (2-0) outscored Starmount and Forbush 70-0. … When you put up half a hundred, the offensive line must be doing something right. The starters up front are Grayson Caton, Lucas Wilson, Brayden Willard, Jacob Cable and Billy Krause. “The whole line did an excellent job,” Allen said. “Brayden had good snaps. That’s key in the shotgun.” … After losing 20-0 at home to Starmount on March 3, South Davie is 0-2 for the first time in its 28-season history as a middle school.