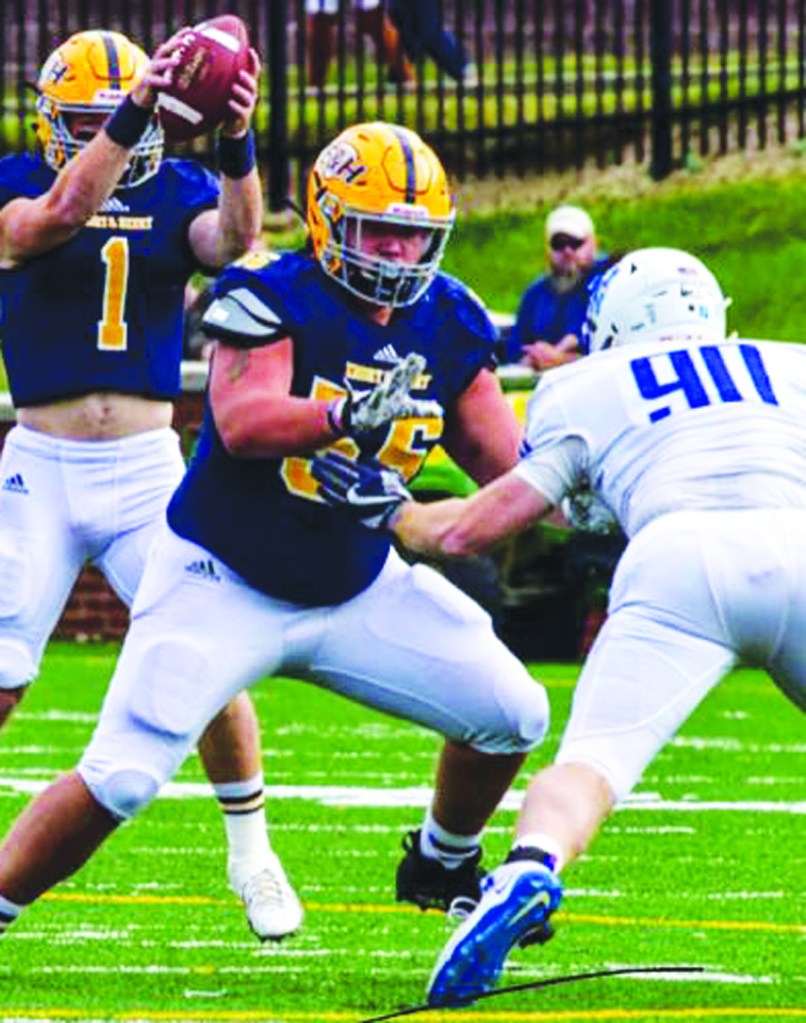 When Preston Robertson was a Davie senior, he was a part-time player on the offensive line for the 2017 War Eagles.

Through work ethic and will, Robertson has become an every-down player for Emory & Henry’s OL.

“I got here in the fall of 2019 and Preston was a guy who led everybody in the weight room,” said E&H o-line coach Cody Bowman, who graduated from West Forsyth in 2011. “From my understanding, he’s done that his whole time at Emory. He’s continuously gotten better in all phases of the game – from the field to the weight room. That’s just who he is as a person.”

Robertson paid his dues as a 2018 freshman, appearing in one game. But he took off in 2019, starting every game and helping the Wasps average 171 rushing yards during a 7-3 season. Emory’s quarterbacks were sacked just 20 times.

Now he’s a chiseled junior at 6-2, 340 pounds. The coronavirus prevented football from being played in the fall, so the Wasps opened their 2021 season at Ferrum on Feb. 26. They won 17-0 and Robertson earned high marks for his play at right guard.

The team’s player of the game went to running back Grayson Overstreet, but Robertson was among four nominees for the honor.

• When the quarterback broke a 41-yard run to the Ferrum 1, Robertson created a gaping hole that sprung him loose. Emory scored moments later to take a 14-0 lead to the half. “Preston is a leader,” Bowman said. “He’s always making sure he’s taking care of his business. He was a pivotal part of not just that play, but the whole night. When we want to dial things up, he’s always a guy we look at to lead the way.”

• With 1:54 remaining in the third, Emory called a jet sweep from its 32. Robertson erased his man at the line of scrimmage, but he wasn’t finished. He ran 12 yards downfield looking for somebody to hit. He found black-and-gold jersey at the Emory 43 and put the guy on skates. The ball carrier was tackled out of bounds at the 50, an 18-yard gain. The guy Robertson was blocking also went down at the 50.

“He ran to the sideline, making sure I saw him lead blocking downfield,” Bowman said. “He’s somebody who is always blocking through the whistle and making sure he doesn’t ever give up on a play. If it goes downfield, he wants to make sure he’s part of the action.”

Bowman loves everything about “P-Rob.”

“We talked at the beginning of the year about who are the guys we can rely on?” he said. “Our center, Dakota Morris, is a third-year starter that we always lean on. We figured that Preston would take another step in the right direction moving into his second year starting, but we never imagined he would take the leaps and bounds that he’s taken to this point. I mean, now he’s a guy that rallies the troops just as much as our senior leader (Morris) does. All the guys trust in him. He’s always there to punch the clock and put his work in. The work’s never done even when the clock’s not ticking. He’s in the film room, making sure he gets extra film work in.”

And then there’s the classroom. Robertson is smart. Very smart. He’s a two-time member of the ODAC All-Academic Team.

“He’s a 3.8 or better GPA,” Bowman said. “When you get one who is as smart as he is and as physical and works as hard as he does, that’s the perfect storm of what you want.”

Notes: Emory & Henry College is located in Virginia. … Although it’s a member of the D-III ODAC, that will change this summer when the Wasps join the D-II South Atlantic Conference. … After this season, Robertson will have two years of eligibility remaining.